Dose One (Adam Drucker) and Jel (Jeffrey Logan) = Themselves... 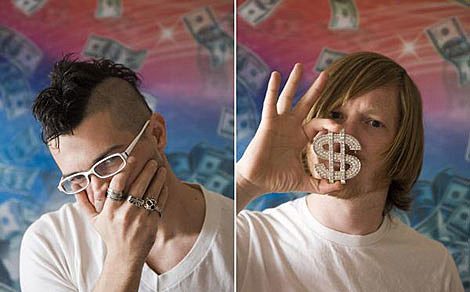 [At the Force Field PR SXSW day party,] Themselves followed [Anticon labelmate Yoni Wolf of Why?] and deserve mention in their own right. The duo of Dose One (of Subtle fame) and Jel just droped the excellent FreeHoudini tape last week, and live, their performance was everything you'd expect from a Scribble Jam vet signed to Anticon. Ferocious double-timed raps performed by a guy in a Mohawk and argyle vest. I understand (and don't really blame) people who are put off by that, but if you can get past the aesthetic challenges posed, this is highly progressive hip-hop, and for once, I don't mean that as a perjorative.[LA Weekly]

On April 1st, Themselves will set out on a nearly-three-week tour, with two NYC shows: Friday, April 3rd at Union Pool and Saturay, April 4th at The Studio @ Webster Hall. (The Webster Hall show has advance tickets on sale.)

Both NYC dates are with Stabbing Eastward (featuring Tunde Adebimpe of TV on the Radio) and DJ Thanksgiving Brown. The Union Pool shows will also feature Zizek.

Themselves' theFREEhoudini release, "a 40-minute, guest-packed mixtape" and limited-time free download, came out on March 16th on Anticon. The label says it'll host the free record for 90 days (till June 14th). A "deluxe version" CD copy of theFREEhoudini, with bonus material, came out on March 25th. Anticon reports that another LP from the band, CrownsDown, will be out later this year.

Themselves will also play Coachella in April. All tour dates, NYC-shows flyers, and a Themselves behind-the-scenes video below... 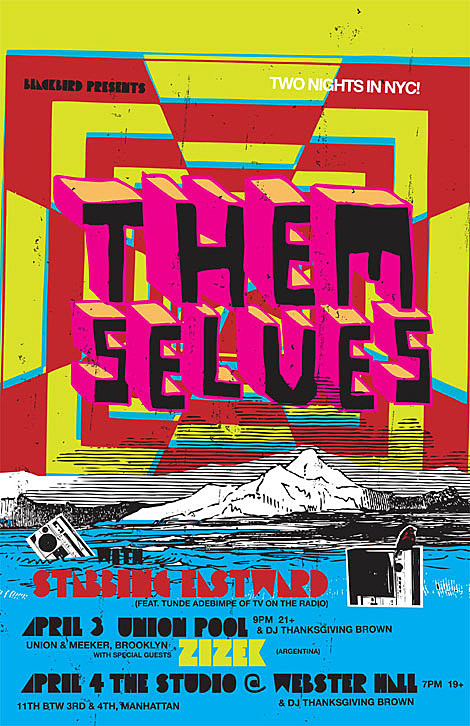