Theophilus London in the studio w/ AraabMuzik (via AraabMuzik) 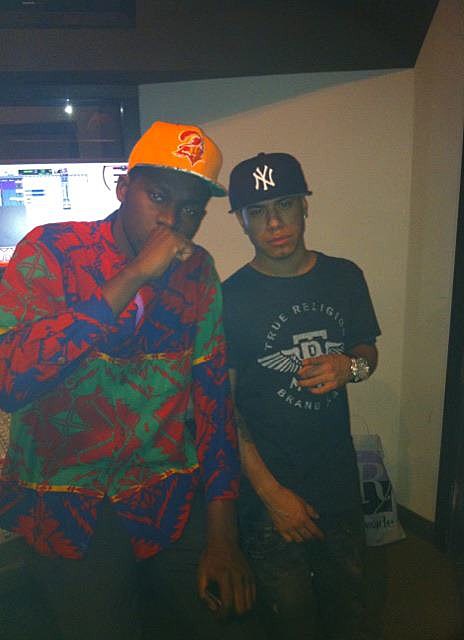 Theophilus London is touring the US and Canada in January and February after he plays the SnowGlove Festival in California at the end of this month. His tour will bring him to NYC on February 9 at Webster Hall. Tickets are on sale now. All dates are listed below.

Theophilus, who has been tweeting about being in the studio, was just pictured in studio with AraabMuzik, who posted the above picture to his facebook earlier today.

AraabMuzik will be in NYC for New Year's Eve at the Ad Hoc party at 285 Kent with Balam Acab, Laurel Halo, Light Asylum, Run DMT, and a special guest. Tickets for that show are still available and there will be two open bars during the night.

Theophilus London's track, "I Stand Alone," was recently remixed by Skream (listen below) who it was just announced is opening for Skrillex at T5 (which sold right right out today). AraabMuzik also opens one of Skrillex's LA shows. Diplo opens one too. But even though Diplo's playing a Skrillex show and approving of the American kids loving it, he still feels that the "most exciting sound out of 2011" is the more atmospheric bass stuff like Balam Acab (who plays the NYE show in Brooklyn with AraabMuzik).

Speaking of approving, Balam Acab seems to approve of the track his Tri Angle label-mate Clams Casino produced for The Weeknd on The Weeknd's new mixtape, which you can download for free.

All Theophilus dates and the Skream remix below...