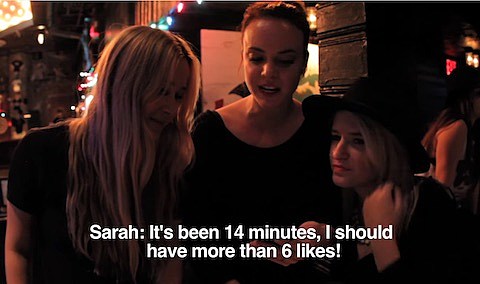 Alex and Sarah talk dating in NYC over brunch.
Olena gets a Tinder headshot.
Melissa finds lingerie in a thrift store.

Though the pilot episode was released to YouTube a couple months ago, the Internet discovered The Bedford Stop yesterday. From Free Williamsburg to PAPER to Gawker to Gothamist to Noisey to Brokelyn, the unintentionally funny reality show set in modern day Williamsburg is making the snarky rounds and giving us something to tweet about. For those bemoaning the death of Williamsburg, this is yet another large nail in the coffin. Bedford and Bowery published a bit of the show's backstory this morning, and you can watch five clips released so far BUT NOT THE PILOT BECAUSE THEY REMOVED IT FROM YOUTUBE SOME TIME LAST NIGHT OR THIS MORNING.... UPDATE: The pilot, which was allegedly removed because of a copyright claim related to one of the songs in it, is back, below....