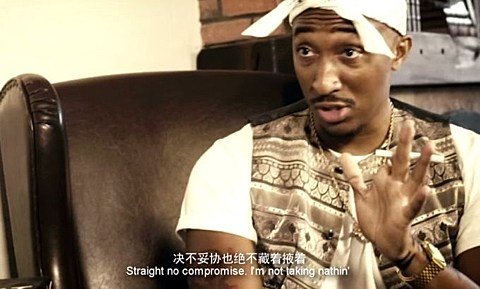 We've never gotten the Tupac biopic that we probably deserve, though he has appeared as a character in Straight Outta Compton and Notorious. Now some people in China have taken it upon themselves to deliver the goods, as a trailer for an unauthorized Chinese Tupac biopic has recently surfaced online. It's called Until the End of Time and the trailer is pretty psychotic. It seems as though the film will involve a high school student doing a research project on Tupac that leads him to cross paths with Pac's ex-lover, or something along those lines. It's one of the better trailers I've seen in quite some time, and you can watch it below.

In related news, it angered many Tupac fans when Billboard recently published a list of the 10 greatest rappers of all time that omitted Tupac. (But hey, at least Macklemore wasn't involved.) I would note that the list in general shows a pretty strong east coast slant, with Biggie, Jay Z, Nas, Ghostface Killah and Rakim all showing up and Kendrick Lamar the sole west coast rapper recognized on the list. Rappers like T.I., Snoop Dogg and Scarface have taken to social media to express their disagreement with the list, although I would argue that Jay Electronica has perhaps the best take on the situation:

And for you LA residents, there's also a new Tupac-centric "All Eyez On Me" exhibit at the Grammy Museum downtown.

Check out the trailer for Until The End of Time, along with some anti-Billboard social media posts below...

This is so disrespectful. !! Whoever did this list need a swift kick in the Ass. No. Tupac. Come on cuz 👞. Jus my opinion