The Thermals @ Brooklyn Bowl in April (more by Andrew Frisicano) 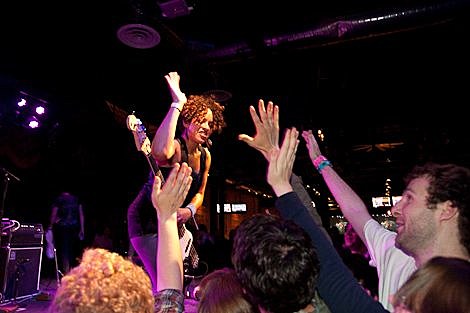 "For their upcoming album Personal Life, The Thermals re-teamed with producer Chris Walla (Death Cab For Cutie). Walla and The Thermals have a long history together - Chris mixed the first Thermals LP (More Parts Per Million, 2003) and produced their second LP (Fuckin' A, 2004). Walla brought his signature brand of crisp, shiny pop production to Personal Life, as he has done for records by Tegan and Sara and Telekinesis, to name just a few. Personal Life was recorded to 2" tape and mixed to 1/2" tape, and vinyl enthusiasts will be happy to know the vinyl was mastered straight from tape, with no computers involved.

The lead-off single from Personal Life, "I Don't Believe You" will be released as a 7" and digitally by Kill Rock Stars on August 10th, 2010."

September is also when the Portland band will start playing shows again including a pre-tour performance at the Bumbershoot Festival, and a during-tour show at Irving Plaza in NYC on October 13th. That show, like many on the tour, is with Cymbals Eat Guitars who just played Siren Fest and Irving Plaza before that (weird for an "indie" band to play there even once these days). Tickets for the NYC show go on sale Monday at noon.