They Might Be Giants @ Prospect Park (more by Ryan Muir) 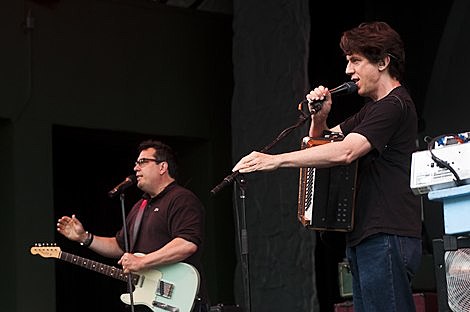 "They Might Be Giants performed a free concert for kids in Prospect Park on Saturday afternoon [July 11th]. We loaded up the boys, packed the picnic blanket and headed off to Park Slope about 15 minutes before they were to hit the stage. Not the brightest idea. First we couldn't find a parking spot so KG dropped myself and the boys off so we could catch the show. The line to get into the band shell area snaked all the way around the entrance and went on and on. Fortunately we made other plans to sit outside the fenced off area with some friends. I have never seen so many kids in one place before. It was mayhem." [you're not listening to my words]

Fresh off their Prospect Park kids show, They Might Be Giants will be releasing a new kids CD called Here Comes Science. That album, which comes with a full-length animated DVD, is due out on Idlewild/Disney Sound on September 1st through Amazon/iTunes and September 22nd everywhere else.

The kick off for TMBG's tour supporting that record will be October 4th at the American Museum of Natural History, where they'll play two family shows. Ticket info TBA.

The band will be back in NYC for another family show on October 18th at NYU's Skirball Center for the Performing Arts. Tickets are on sale now.

Full tour dates, with a video of TMBG live on WNYC in May, are below...

Filed Under: kids, Museum of Natural History, NYU, Prospect Park, They Might Be Giants
Categories: Music News, Photo Galleries
Comments
Leave A Comment
Back To Top