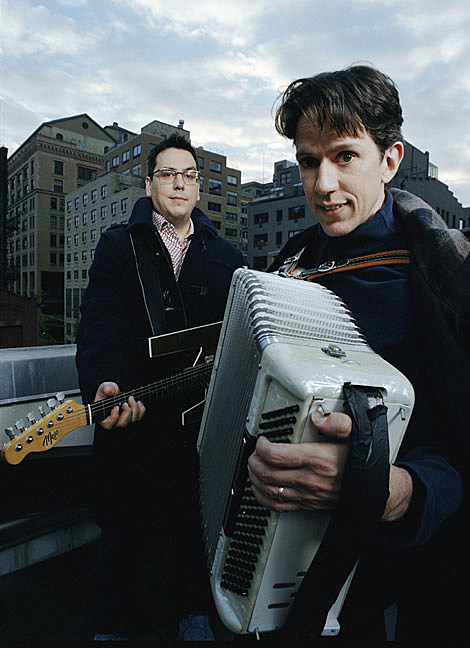 They Might Be Giants will be playing a free 'Celebrate Brooklyn' show at the Prospect Park Bandshell on Saturday, July 11th (which according to a commenter will be a show for kids).

They're one of many bands playing the park this summer. The entire lineup of free shows has not yet been announced, but we know that it includes the opening night with David Byrne, and an indie-friendly show with Dr. Dog and Phosphorescent on June 27th.

Shows at the park that cost money include MGMT, Suckers and Kuroma (sold out), Animal Collective (second night still on sale), Jackson Browne (still on sale), and Bonnie Rait and Taj Mahal (tickets now on sale).

The NY Philharmonic, though not in the bandshell, will be in Prospect Park too, playing a July 15th show. In addition, the orchestra is playing the Great Lawn in Central Park, which is not to be confused with Central Park Summerstage which recently announced their whole summer schedule.

They Might Be Giants played other Prospect Park shows in past years, including 1995 and 2004. An official bootleg of their '04 show is for sale as a download on the band's site. Check out a clip from that recording above.

They Might Be Giants have been playing NYC's (Le) Poisson Rouge almost monthly from the end of 2008 through March. They're at the venue again on May 30th. Tickets are still on sale. It's not free, but it's much more intimate (and not kids music) (though it's not clear if this LPR show will have a theme like some or all of the others did).

Before then, TMBG is also doing two separate sets at the Tarrytown Music Hall on May 9th. Tickets for both the early family show and the late rock show are on sale.

All TMBG tour dates, with "video" from the band's '95 Prospect Park set, below...