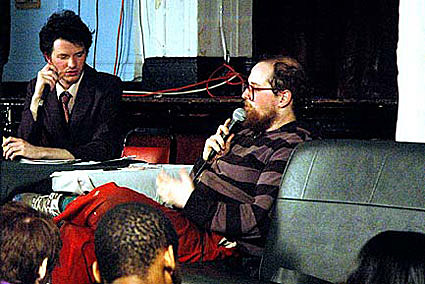 ....Moments before Deacon's exhilarating performance--which got someone as tightly wound as myself to dance--four Hispanic dudes entered the venue. Before that moment, I had felt like my companion and I were the ones who didn't fit in, but these guys in their expensive baggy clothes obviously weren't part of the intended clientele or demographic for this event.

Naturally, I was prejudiced against them, suspect of their motives for entering into this hipster Temple party. With the crowd, in tight, circled around Deacon, the party began, with everyone in the place dancing along. Even these "thugs" were dancing and seemed to be enjoying it.

Of course they were into it. We were easy prey. The geeky, scrawny white kids--many of which looked ridiculous--had their backs were turned, allowing these "thugs" to easily rummage through our bags that we naively expected to be safely stashed. My lady and I had let down our guards, in order to loosen up and have fun, but also because of our unwillingness to hold prejudiced feelings towards people based solely on how they looked. Though we were naïve enough to set down our bags, we kept a watchful eye on the culprits. Those watchful eyes watched those young assholes steal all of her cash (leaving her without a dime for food for the entire rest of the month) and a credit card. We acted just in time to grab our bags before they made with the big heist. The thief who had stolen my friend's money had his hand on my camera bag, while we plucked it away without confrontation.

We quickly made our way to security to warn of the theft that had been taking place. The culprits were fully aware that they had been caught, and quickly made their way to an escape. While the security staff could have easily taken action and saved a lot of kids from the disappointment of losing a lot of money and valuables, they decided to let the thieves pass by unquestioned..... [Jonny Leather - NY PRESS]

I missed all of that because I was at the Cloud Cult show at Union Hall instead. As far as I know, nothing was stolen from there, but I did overhear some stock tips that turned out bad, and I almost got hit in the toe with a bocce ball (just kidding).