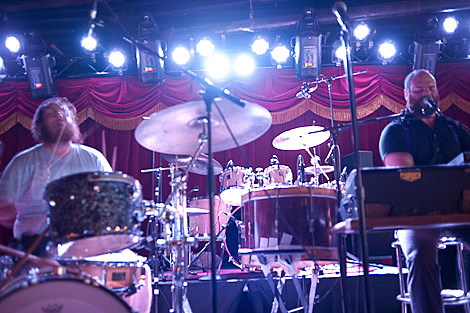 There's a new indie rock party cruise in New York this summer: The BOAT. The maiden voyage is July 16 with Pattern is Movement and Glass Ghost, and then on August 27 it's BV faves Think About Life. Giving this more of a true cruise ship vibe, there'll be two performances a night for each date, 7PM (6:30 board) and 10PM (9:30 board). Shows are $15 for general admission or $30 for an open beer bar option. The BOAT sets sail from Pier 40 on the Hudson (Houston and West Side Highway).

We're giving away a pair of tickets to the July 16 show. Just send an email to BVCONTESTS@HOTMAIL.COM with the subject line "Boat Show" and we'll pick a winner at random. NOTE: These cruises are 21+.

This looks to be Pattern is Movement's only date on their schedule right now. Glass Ghost are also playing Brooklyn Bowl next Sunday (6/27) with Keepaway, The Babies and Hooray for Earth as part of the Northside Festival.

Think About Life also seem to be taking it easy this summer, playing a few Canadian festivals. After their cruise shows, they'll head to England to play the Bestival on Sept 13, and are scheduled to appear at this year's Iceland Airwaves on October 13. All Think About Life dates are below...