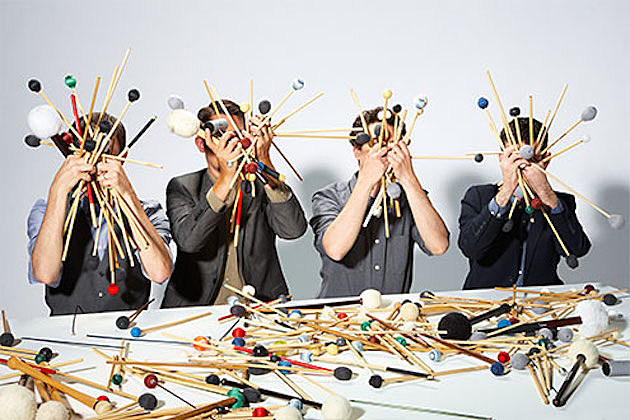 Legendary American composer Steve Reich turns 80 this year and  the Third Coast Percussion ensemble are celebrating with an album of Reich interpretations. That record is out February 12 via Cedille and you can watch them take on Reich's "Music For Pieces of Wood," which is on the LP, below.

Third Coast Percussion will be touring, playing compositions by Reich and composers influenced by him. One of these will happen in NYC, at the Met Museum on February 10. It will feature Reich's Sextet and Irish composer Donnacha Dennehy's Surface Tension, and tickets are on sale now.

Other dates of the tour will also feature the multi-media project "Wild Sound," by Glenn Kotche of Wilco. All dates are listed below.

In related news: The Mivos Quartet will perform Reich's Holocaust-related work "Different Trains," the contrapuntal "Triple Quartet," and "Violin Phase" at the Jewish Museum on February 4. It being presented by Bang on a Can and tickets are on sale.