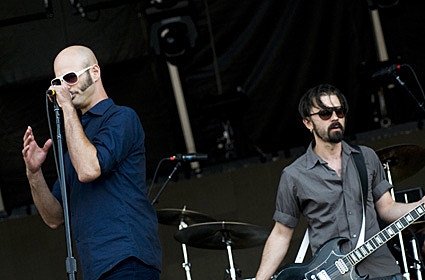 Every show we've ever played in NYC has some surreal brain-Polaroid attached to it: 1st time playing CBGB, 1st show after I went into remission, last show with Shudder To Think, 1st show with Boy George in the house, etc. I also have perfect memories of historical shows by other bands at Webster Hall (then The Ritz) in the late-eighties, including one that Nathan and I attended in '87, where a then-unknown Guns N Roses played for about 200 people, after which I vowed never to wear underpants again, such was the sheer force their tawdry excellence.

We at Shudder To Think are fairly certain that the combination of all of the above (history, location, no underpants) will make for a fucking amazing show on Saturday.

This Saturday: Shudder to Think is playing Webster Hall. Hot Chip is playing Terminal 5. Common and NERD are playng Roseland. Fleet Foxes are playing Grand Ballroom. Jenny Lewis is at the Apollo. Nick Cave & the Bad Seeds are at the WaMu Theater at MSG. Stereolab is at Irving Plaza. Glasvegas is at Mercury Lounge. The Kills are at MHOW. Crystal Stilts/Cause Co-Motion/Tyvke is at Death By Audio. Etc...