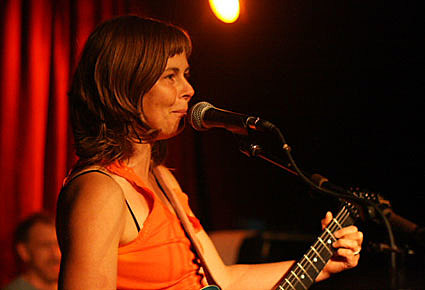 With their setlist, you pretty much got what you came for, unless you wanted Teenage Superstar. Their set was about 45 minuteslong, focusing on their top songs. Their voices haven't aged at all, even though I'd like to meet the person who saw them back in the day and remembers how they played. I can't emphaisze more how unique and special the night was, and then having it be a tribute to the indie rock of 20 years ago. It seems like it could be made today and not feel dated. [Music Snobbery]

Tonight is Southpaw (July 10, 2008). Stevie, Bobby and Richard of Belle & Sebastian are playing as their backing band. Bill also pointed out that UK band The Indelicates are the opener. The Vaselines' only other US show is the Sub Pop Festival in Seattle this weekend. Video of Nirvana unplugged, and the Maxwell's setlist, below....

Jesus Dont Want Me For a Sunbeam

Son of a Gun
Monsterpussy
The Day I Was a Horse
Jesus Wants Me For a Sunbeam
Oliver Twisted
Molly's Lips
Slushy
Let's Get Lucky
No Hope
Sex Sux (Amen)
Rory Rides Me Raw
Dying For It
ENCORE:
You Think You're A Man
Dum-Dum