Aesop Rock at McCarren Pool in 2008 (more by Jason Bergman) 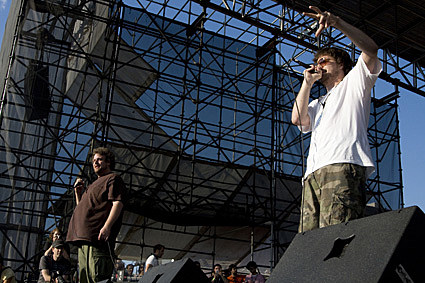 Homeboy Sandman is set to release his first full length album on Stones Throw, First Of A Living Breed, which is due out on the label on September 18. The first single, "Watchu Want From Me," was produced by Oddisee and you can download it above or stream it below. The cover art and tracklist are below too.

Homeboy Sandman will be supporting the album on a tour with Brother Ali that hits NYC on September 27 at Bowery Ballroom (tickets), but before that both he and Oddisee will play a FREE day show in NYC TODAY (8/2) at Public Assembly with Immortal Technique and Tru Fam for a Last.fm filming. Doors are at 2 PM, the show is completely free and open to the public, no guest list.

If you stick around the Brooklyn venue, there will also be a hip hop DJ dance party at Public Assembly tonight (8/2) with Da Beatminerz and X-Ecutioners. Tickets for tonight's show are available.

In addition to those two Public Assembly shows, there's tons of other good hip hop shows going down in NYC tonight and this weekend. JSpace.com is throwing 'The Ultimate College Bar Mitzvah" at Highline Ballroom tonight (8/2) with sets from Talib Kweli, The Higher Concept, and The Rooks. It's a bit of an unusual show though. Highline's site reads, "This is THE event for all interns and college students in the New York area. Rock your college swag, bust some moves, and come ready to have a great time. From 8-9PM, professionals from large corporations will work the room, looking to meet college students." Tickets for the show are available.

Tonight's Bowl Train at Brooklyn Bowl (8/2), which is usually DJed by Questlove, will instead by DJed by Biz Markie. Tickets are available.

Nina Sky have a new album/mixtape out this week (7/31) called Nicole and Natalie (the actual first names of the twins that make up the duo), which you can download in full above or stream below. The track "Comatose" was produced by Brenmar, who Nina Sky will share a bill with in NYC tonight (8/2) at the Studio at Webster Hall. Chippy Nonstop, Roxy Cottontail, and Ferrari Snowday are on the bill too. TIckets for that show are available.

Kendrick Lamar and Schoolboy Q's tour supporting Wiz Khalifa hits Jones Beach tonight (8/2). Tickets for that are still available. As mentioned, Kendrick will return to NYC on his tour which hits Terminal 5 on September 15 and Schoolboy Q will when his tour with A$AP Rocky and Danny Brown hits NYC on September 27 at Roseland Ballroom. Tickets for that show go on sale Friday (8/3) at 10 AM.

Aesop Rock, whose new album Skelethon is at least his best since Bazooka Tooth and one of the contenders for rap album of the year, is currently supporting that album on a previously discussed tour with Rob Sonic, DJ Big Wiz, Edison, and Dark Time Sunshine which hits NYC this Friday (8/3) at Irving Plaza. Tickets for that show are still available. Dark Time Sunshine also just released a new album, ANX, which features Aesop Rock, P.O.S., Busdriver, and others. You can stream that album in full below.

Also on Friday (8/3), Aesop's Def Jux labelmate RJD2 will be in NYC for a Girls & Boys party at Webster Hall.

Ghostface Killah and Sheek Louch are currently touring as Wu-Block and will hit NYC on Wednesday (8/8) at Highline Ballroom with Saigon. Tickets for that show are still available.

Ghostface will play his own show in Clifton Park, NY on September 14 at Upstate Concert Hall. Tickets for that show are on sale now.

In other Wu-Tang news, Inspectah Deck will play NYC on August 24 at BB King's with Colt Seavers. Tickets for that show are on sale now.

We also just mentioned that GZA will be touring later this year with Killer Mike, Sweet Valley (aka Nathan from Wavves' new beat project), and Bear Hands. That tour hits NYC on October 18 at Irving Plaza.

Q-Tip's next Offline Party at Irving Plaza happens on August 17. Tickets for that are available.

Beanie Sigel plays S.O.B.'s on August 16 with KA. Tickets for that show are on sale now.

Any other good upcoming hip hop shows that we missed?