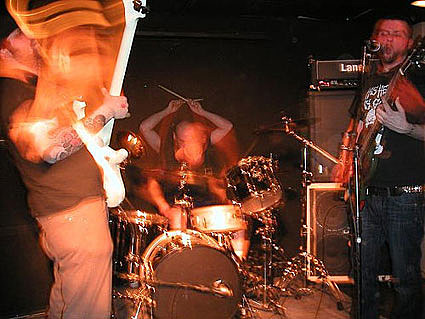 That's it. I'm calling Mayor "Doomberg" (as El-P calls him)! We need to get one of those keys-to-the-city and have the week of the 21st designated as official Neurosis & pals week.

First, you have the two killer Neurosis shows back to back at a Masonic temple (Jan 24th & 25th... and possibly with Mastodon in tow). Then on the 26th Scott Kelly (of Neurosis & now Shrinebuilder fame) and Jarboe (Swans) play a solo show at the Pussycat Lounge! Make sure to stay and check out NYC mainstays Unearthly Trance lay waste (flyer).

Speaking of the guys from Unearthly Trance..... check for them as they embark on a tour with the always great Pelican and Black Cobra (mems Acid King, and recently off tour with The Sword). Dates at the end of this post.

Genghis Tron have announced some initial tour dates for 2008. That includes a few NYC shows and SXSW. Dates at the end of the post.

Tech-metal monsters Dysrthymia will grace the stages of Cake Shop on January 10th, along with locals Stay Fucked.

Topping the amazing-band-opening-for-not-so-amazing-bands news, Napalm Death will swing back into town with Devil Driver, Walls Of Jericho, & 36 Crazyfists. Tickets are on sale for a show at BB Kings in NYC on March 24th. The rest of the dates below.

Guitar-noodler-extraordinare (I mean that with the highest of compliments) Mick Barr will bring his Ocrilim project to bless Precious Metal on Feb 18th at Lit Lounge. Also check for Car Bomb on Feb 4th.

Russian Circles is at work on their new record for Suicide Squeeze which will be recorded by Matt Bayles, Bayles credits include Botch (yeah, he did "We Are The Romans"), Murder City Devils, Minus The Bear, Isis, and Mastodon (all of their LPs). Look for some of those new toetappers to show up in their set during their upcoming tour with Ipecac's hip hop antagonists Dalek. They're at Mercury Lounge on February 25th. More dates at the end. 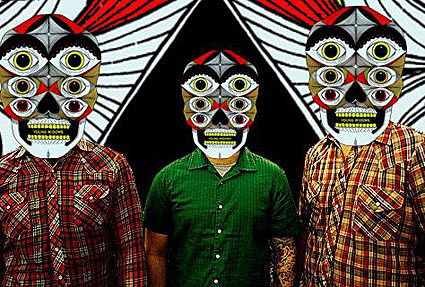 Louisville's own Jesus-Lizard-alikes (and siblings to Coliseum), Young Widows, will clobber us with their noise/metal/post-punk at Death By Audio on January 23rd. The Brooklyn show will feature The Austerity Program (Hydra Head) as well as Tombs (check for that EP on Black Box Recordings), and Black Horse......

I love end of year lists..... Here are a ton of Best of 2007 lists by guys from The Red Chord, Between The Buried & Me, Phil Anselmo, Architect, Impaled, Behold... The Arctopus, and many many more.

Philip Anselmo (Vocals) - Down
(in no particular order)

Bad Brains – Build A Nation
The Sursiks – I Didn’t Know I Was Singing
Terra Diablo – Deluge Songs
Darkthrone – F.O.A.D.
Down – III: Over The Under

And another set of Best of 2007 Lists by members of Gorgoroth, Converge, the newly reformed Carcass (!), Mayhem, and Pepper Keenan among many others..

And here are those dates....

*with The Austerity Program, Steve Moore
**with Ponytail, Aa
***with Nachtmystium, Zoroaster