Made Out of Babies

"Cooker" comes from Made Out Of Babies's aforementioned new record The Ruiner which comes out on June 24th, the same day as their record release party at Union Pool with Dianogah and The Austerity Program (who are also playing the After The Jump Fest).

Japanese sickos Coffins have released their latest Buried Death on 20 Buck Spin and even though it wasn't SUPPOSED to be available until June 24th, it's available now at the label website and at their upcoming shows. Check out the track "Under The Stench" above.

Set times and details have arrived for the 2008 Maryland Death Fest (May 23-25). Check 'em out below. Tickets are still available.

Iron Maiden kick off their North American tour next week. Single tickets are still available for the show at MSG, and you should have no problems getting lawn seats for PNC.

Extreme The Dojo tour with At The Gates, Mayhem, Dillinger Escape Plan & Pig Destroyer live in Osaka, Japan on May 8th, 2008

Details about the first At The Gates reunion show have appeared, including the above video, a set of photos from the show (viewable here), and a full set list! Dig on this...

Check for tickets for their upcoming shows at Ticketmaster.

Cult Of Luna have dropped off their new baby, "Eternal Kingdom", over at their myspace. Eternal Kingdom (the album and the song) drop on July 8th on Earache. 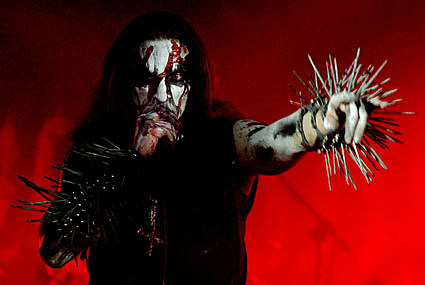 The now infamous Gorgoroth show in Krakow, Poland.... you know, the one that got the Polish police all riled up....with all of the severed sheep heads that VH1 labeled the 45th most metal moment of all time... WILL actually see the light of day. Gorgoroth will release Black Mass Krakow 2004 on June 10th, via MVD.

Pelican - "Dead Between The Walls"

PUNISHMENT DUE:
TRANSISTOR TRANSISTOR - RUINED LIVES: Awesome, furious and furiously catchy post-hardcore. These guys have figured out how to take 100 left turns and never end up in the same place (as a lot of their peers). Definitely recco'd.
THE GATES OF SLUMBER - CONQUEROR: For maximum effect, follow this procedure: 1) Apply denim vest. 2) Purchase Camaro (Firebird will suffice) 3) Insert "Conan The Barbarian" DVD into in-dash video monitor, mute audio. Insert and play Conqueror. This is kick-ass old school 80s informed doom metal.... simple and great.

NEWS BLAST (BEATS):
- Click here if you want to see Madonna performing Pantera's "A New Level" (forward to 6:20)
- Opeth is STILL at it with those interviews! Bam. Bam. Bam. Bam. And the Progressive Nation Tour blog....Bam.
- Viking metallers Amon Amarth have issued a video update from the studio, available here.
- Tragedy has lined up a second leg to their tour, this time hitting mostly the West Coast with Japan's Blowback. Tour dates are below.
- Recently departed grinders Insect Warfare have uttered the first few words of their last will and testament, the Noise Grind Power Death, Elitist Noisecore Assholes 12". Check out the oh-so-gentle track "Fuck Off Part 1" over at their myspace.
- Internal Affairs have posted a new song, "Guilty" at their myspace.
- Ghostlimb has posted two new songs from the upcoming Bearing & Distance at their myspace.
- Leng Tch'e have has said tah-tah to vocalist Boris Cornelissen and hello to new vocalist Serge Kasongo (Akros).
- Toxic Holocaust are working with Jack Endino on their new record and are posting DAILY studio updates to their myspace.
- Decapitated have issued their first (and last? considering the death of Vitek) DVD, Human's Dust, available on June 10th. The video consists of a (less controversial, compared with Gorgoroth's) show in Krakow in 2002, as well as bonus vids and interviews.
- Death dealers Decrepit Birth have inked a deal with Nuclear Blast. The deal comes three months after the release of Diminishing Between Worlds.
- End Of A Year has signed with Deathwish Records.
- Ozzfest is definitely a shadow of it's former self (hell, even numbnuts thinks so), now only a single day event (Aug 9th) in Frisco, TX. Click here and check out the list of bands that you don't like and bands that are already on tour anyway. (EXCEPT for the exclusive return of the mighty Rigor Mortis)