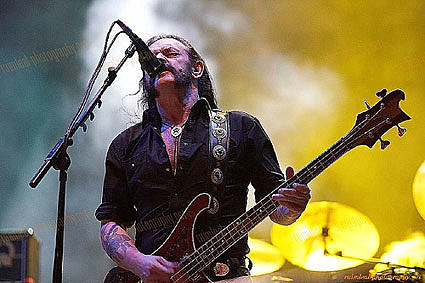 I haven't even seen it yet, but I have hereby declared the following as one of the most metal movies of 2008. It's called Lemmy: The Movie. A feature-length documentary on the man, the legend, Lemmy Kilmister of Motorhead. In case you had some doubt about how amazing this will be, check out this video of Lemmy and his then drummer "Philthy Animal" trashing a hotel room. Motorhead are one of the Metal Masters, and tickets are still available. 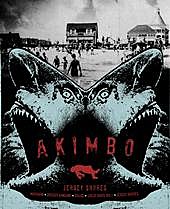 Downloadable above, check out the first tasty nugget from Akimbo, pulled from their upcoming Jersey Shores LP! Akimbo's new concept album, about how "sharks.... will totally fuck you up" is due later this year on Neurot Recordings. Akimbo are scheduled to play Jello Biafra's 50th BDay party with the Melvins.

While all of us are getting riled up for Monticello, All Tomorrow's Parties have announced the curators for 2008's Nightmare Before Christmas.... Melvins & Mike Patton! Info is limited so far, but we do know it'll take place between December 5 - 7 at Butlins Holiday Camp in Minehead and you can expect to see the following confirmed performers: Melvins, Isis, Neil Hamburger, Dälek, Big Business, The Locust, Zu, and Fantômas performing The Director's Cut! More deets are available here. Melvins will drop Nude with Boots this July on Ipecac. Mike Patton recently released a soundtrack to a short film, A Perfect Place. 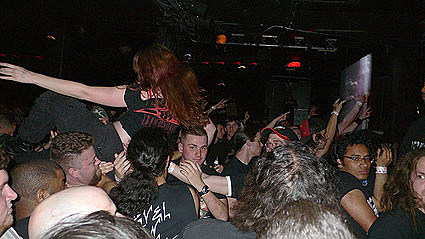 A definite contender for "Most Metal" film of 2008 is Vice's Heavy Metal In Baghdad, out on DVD June 10th. You can pre-order the DVD here (with all the mahhhvelous special features including a post-doc featurette), but if you're lucky, you can win on DVD for FREE along with a signed copy of the movie poster! Email us at BVCONTESTS@HOTMAIL.com to enter! (subject: metal).

Om's previously mentioned Live At Jerusalem LP, aka the last LP featuring drummer and ex-Sleep-er Chris Hakius, is available now, so get it here while they last (2,999 left after my trip over there). We have a taste of it below in video form. In other news, The previously mentioned Gebel Barkal 7" featuring new drummer Emil Amos is on the way. Om was recently added to the lineup at ATP Monticello.

The reunited Brutal Truth have announced a handful of US tour dates including one date at Rebel on August 17th! Ticket info is currently unavailable, but full tour dates are below. Brutal Truth are currently streaming a new song at their myspace, and are on Relapse's new grind comp, This Comp Kills Fascists.

Louisville insano punks Lords have announced a US tour with Suicide Note for the tail end of June through early July, including one date in NYC on June 28th. Details are forthcoming, but the whole tour schedule is down below. Suicide Note has a new record, Empty Rooms produced by (guess) Kurt Ballou (Converge) who did some guitar and bass work on the album. Look for it August 5th on Hawthorne Street Records. Lords drummer Tony Bailey's other band, Dead Child, recently dropped a video for "Sweet Chariot", which is viewable here. 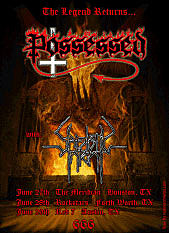 Bay-Area death pioneers Possessed, or at least Jeff Becerra and backing band, will hit the stages of Europa flanked by a veritable mountain of support acts including Mortician, Malkuth, and Rumplestiltskin Grinder. What's more, the show will be documented for a DVD! Tickets are on sale. Cavelera Conspiracy recently posted a cover of Possessed's "The Exorcist" (along with an unreleased track "In Conspiracy") to their myspace.

A Storm Of Light will finally shine brightly on June 10th when Neurot drops And We Wept the Black Ocean Within. The boys have been added a few of shows with Harvey Milk (including the show at Europa with Growing - tix still availa>) as well as a european tour with Neurosis! Full Harvey Milk tour dates & Neurosis/A Storm Of Light tour dates below. If you missed it, check out an interview we did with Josh of A Storm Of Light/Neurosis.

Romans have posted four new songs from the forthcoming All Those Wrists to their myspace and will hit the road on a coast to coast tour, including two dates at Lit Lounge for Precious Metal (June 16th and July 28th). Labelmates The_Network & Architect will also hit up Precious Metal on July 14th. Architect is working on their new one.

Final aka Justin Broadrick was dropped a new digital only release on his Avalanche Records imprint. With four pieces clocking in at a mighty 47 minutes, Fade Away marks Justin's newest release since is now legendary 150 piece 4CD set by Final, INFINITE GUITAR 1 & 2 / GUITAR & BASS IMPROVISATIONS VOL 1 & 2 (which is fetching upwards of $300 on ebay). Pick it up here.

At The Gates performing their classic "Blinded By Fear" on May 31st, 2008 in Madrid.

Doomers Atavist & drone ninjas Nadja have announced that they will pair up again to release II: Points At Infinity, for release in late August on Profound Lore. Nadja will also drop a re-issue of a 2xCD version of Bodycage in late fall on Profound Lore.

PUNISHMENT DUE:
ASCEND - Ample Fire Within: A hulking mass of experimental ambient drone doom that as interesting as it's pedigree (sunn o))), Iceburn, Goatsnake). Highly recommended. Out NOW.
COFFINS - Buried Death: Repulsive, foul, hideous doom-death-crust. Great stuff! Out NOW.
BURNING SKIES - : Napalm Death grind meets metalcore, but sans all the tough guy bandanas and basketball jerseys. Heavy heavy. Out NOW.
OPETH - Watershed: Ballsy and epic, Watershed is another stunning addition to Opeth's unbelieveably consistent canon. This is one of those few records that expands with every listen. Out 6/3
MADE OUT OF BABIES - The Ruiner: Punishing razor sharp noise punk that slashes & burns past the obvious Jesus Lizard/Am-Rep influence. And if you ever had a problem with female frontwomen in heavy music, Julie Christmas'll meet ya in the parking lot. Out June 24th.
CULT OF LUNA - Eternal Kingdom: Imperial-fanfare horns. Homages to the Blade Runner soundtrack. Oh, and did i mention massive thundering riffs that outnumber those on Somewhere by almost 2 to 1? Possibly Cult Of Luna's best one yet, and a contender for best albums of the year. Out 7/1.

NEWS BLAST (BEATS):
- Biohazard's only US reunion shows are scheduled for (how appropo) Staten Island at the newly relocated L'Amour on June 20th & 21st. Tickets are on sale Check out the flyer.
- Lamb of God will host the world premiere of the Walk With Me In Hell DVD set at Chelsea Cinemas on June 30th. The band will be in attendance, and tickets are available by ordering the DVD at their site.
- The guys at Metalsucks posted a great interview with Paul Ryan of Origin.
- Amebix have announced thre relase of The Spiderleg Recordings a compilation of Amebix's No Sanctuary 12", Who's The Enemy 7", and the Winter 7". Remastered by Jello Biafra, pick it up at Alternative Tentacles.
- Machine Head has posted their new video for "Halo" from last year's awesome comeback The Blackening at MTV Overdrive.
- Trash Talk have posted a new song to their myspace.
- Genghis Tron will board up the plane to hit some more shows in Europe and Brazil. Dates below.
- Gorgoroth will release a new live album Live Grieghallen in June on Regain featuring features Infernus on bass and guitar, Gaahl on vocals, and Garghuf on drums. Gorgoroth have a new DVD on the way.
- Keep Of Kalessin have made their entire new album Kolossus available for stream at their myspace.
- Danzig has announced The Blackest Of The Black Tour with Dimmu Borgir, Moonspell, Winds Of Plague, & Skeletonwitch. No word if this is a new tour or part of the last tour ever that he announced in 2005.
- Joe Duplantier from the mighty Gojira stopped in with Revolver magazine to discuss current recording sessions for their new album due in October, describing it as "more brutal" (read here). In other news, every band ever has described their new record as "their best one yet".
- Crustcake has photos of The Ocean/Kylesa/Lair Of The Minotaur/Withered shindig. Sheckit. Also avail over at Crustcake, an interview with John Baizley of Baroness.
- The kind folks at Temporary Residence have pointed us to video of Envy performing at ATP 2008. Also available, an entire show from San Diego in 2006.
- Neurosis has announced a few European dates, but no new US ones. Sigh. Details are below...
- Iann Robinson sat down with badass Julie Christmas of Made Out Of Babies
- Lambgoat interviewed Meshuggah.
- Returntothepit.com has got it on LOCK when it comes to Maryland Deathfest pics. Check out day 1, day 2, and day 3. By the way, set your calendars, Maryland Deathfest 2009 is scheduled for May 22nd - 24th.
- Level Plane Records has dropped a 500 copy limited edition of Bloody Panda's Pheremone LP. Get your order on.
- Iron Kodex will release Slough Feg's 2006 opus Hardworlder on vinyl. Pick it up here.
- Sweet Cobra has signed to Black Market Activities, who will re-release last years awesome Forever.
- Machine Head has posted their new video for "Halo" from last year's awesome comeback The Blackening at MTV Overdrive. Machine Head are scheduled to play Poughkeepsie with Mastodon.
-Pentemple

* album ZIP on the top of this posts features Killing The Dream, Blacklisted, Cold World, Reign Supreme, Narrows, Trap Them and many many more.