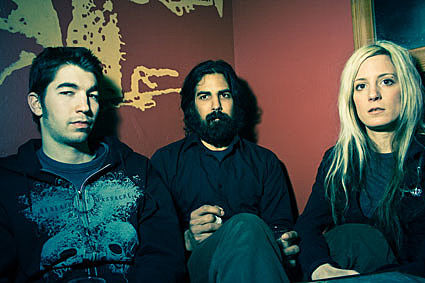 Welcome to This Week In Metal, Special Potty Mouth Edition! Fuck The Facts shall rage from sea to sea as they begin "Grinding Into Cataclysm" (their tour name) with Psyopus, War From A Harlot's Mouth, and Left To Vanish. FTF have a new record, Disgorge Mexico, due July 22nd on Relapse Records and have been kind enough to bless us with some tracks for download! Check out "The Storm" and "Absence And Despite" above and check 'em out at the Knitting Factory on August 18th (ticket info forthcoming). Full tour dates are below. Fuck The Facts also have an upcoming split LP with Leng Tch'e.

Opeth has announced two new dates as part of their previously mentioned North American tour. Here is the best part (as if THAT wasn't good enough): Word is that High On Fire & Baroness will open the shows! As more dates roll in, you'll have em, but so far all we have are Chicago on September 24th and San Fran on October 6th. Pics from their last NYC show at Terminal 5 HERE.

Doomriders have announced a show at Europa in Brooklyn on August 24th! Tickets are on sale.

Doom riff lords Grand Magus will drop Iron Will on July 9th in the US via Candlelight and recently sat down with Metal Hammer to go over Iron Will track by track. Check out "Like The Oar Strikes The Water" and "Silver Into Steel" downloadable above. 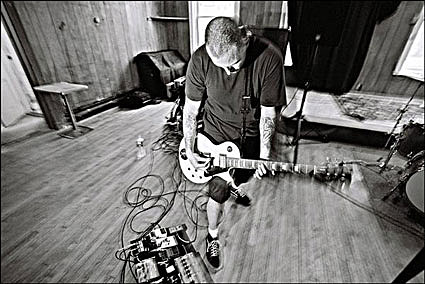 Tombs has signed to Relapse Records and have one last show (at Death By Audio on July 12th with Krallice, Wetnurse, & Bloody Panda) scheduled in US before they hit the road for a short mostly UK tour in September. Full tour dates are below.

NYHC unsung heroes Absolution has reunited to play a show at the Knitting Factory! Tickets are on sale here. 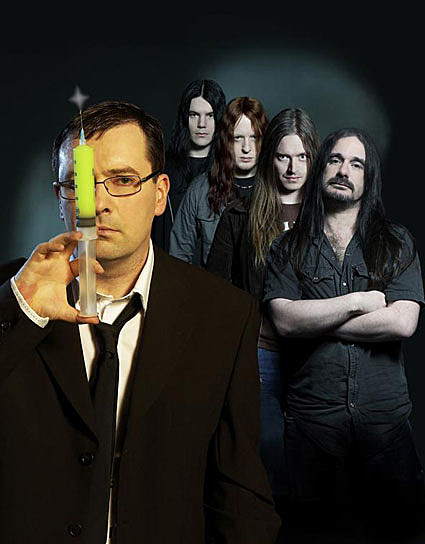 Tickets for the previously mentioned Carcass show @ Nokia Theater with Necrophagist and Aborted (and possibly Suffocation) go on general sale Friday July 11th @ noon, but are currently on internet presale! Aborted recently dropped their new one one on Century Media and are out on the Summer Slaughter tour NOW. Carcass also added 2 new dates, one in Toronto on September 8th and another in in Montreal on Sept 7th.

Belgian shadow-lords Amenra have dropped Mass IIII on Hypertension Records, and we have their single "Razoreater" available for download above! Look for the boys to scoot on through the US in "probably in 2009". Amenra is currently touring Europe, with some upcoming dates with Converge, Integrity, and Coliseum.

Burst is back, as we reported earlier, but now we can mark our calendars! Lazarus Bird takes flight in the US on September 16th via Relapse Records. "Expect an album that will NOT be Origo part 2, but something new for Burst", commented the band.

Cavalera Conspiracy is playing quite a few recognizable Sepultura tunes on their ongoing tour (check 'em out in an ENTIRE show available for download above, setlist is below), which is news in itself, but Max also aint neglecting his other bidness! The new Soulfly record Conquer, is due out July 29 on Roadrunner WHILE he is on the road with CC. In addition, Soulfly has a new single, "Unleash", that is available for download above, with the video viewable here! In related news, MTV(?) sat down with Gojira badass and Cavalera Conspiracy contributor (but not touring partner) Joe Duplantier to discuss their upcoming record.

Fuck All Y'all Mother Fuckers. Thats the name of the new record that Lords will drop on Black Market Activities (Guy from The Red Chord's label). The release date "should be in August", but we can preview some of them joints on their previously mentioned tour (including their date at the Charleston on June 28th) or streaming on their myspace. Suicide Note is on that Lords tour, and they share members with the mighty Sweet Cobra, who recently posted a new track from Bottomfeeder, a new 12" due out on Seventh Rule in September. Check it out on their myspace.

Motorhead has announced Motorizer, their new album on SPV records due out on August 26th in the US. Lemmy has a new documentary coming out about him and is part of the Metal Masters Tour. Tickets are still available. Judas Priest also dropped thier new record Nostradamus and a video for "War" which is viewable here. Priest was interviewed by MTVNews (?).

* A full set of photos from Heavy MTL is available here and here.

Jon Chang's (ex-Discordance Axis and currently Hayaino Daisuki) Gridlink has dropped on Hydrahead, and you can check out the full glorious minute of it at their myspace. Weekend Nachos have been added to the grindfest with Gridlink/ASRA/Hayaino Daisuki at Charleston on August 14th.

Landmine Marathon has lined up Jonny Davy (Job For A Cowboy) and Antony Hämäläinen (Nightrage) for appearances on their upcoming Level Plane release Rusted Eyes Awake. Check out the progress of Rusted Eyes Awake at their blog.

Melvins are currently streaming the supremely Jimmy-Page-esque "Kickin Machine" at their myspace. In other Mevlins news, Newbury Comics is offering an autographed copy of Nude With Boots if you preorder on their site.

Swede "Lychanthropunks" Wolfbrigade have announced COMALIVE 2008, or the US tour that we threatened earlier, including one date at the Knitting Factory on Oct 2nd. Ticket info is forthcoming. 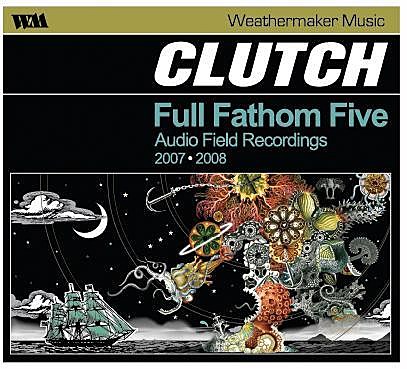 Clutch has a new live CD/DVD, Full Fathom Five, dropping on August 12 on their own Weathermaker imprint. They also added a tour with The Sword and the mighty Graveyard in the southeast in September and October. Full tour dates are below.

Toxic Holocaust has posted two new songs to their myspace. TH's new record will have Jack Endino manning the boards.

Intronaut has created a blog and are documenting the recording of their new album for Century Media. In related news, Deadsea has been added to the Intronaut/Behold The Arctopus/Mouth Of The Architect show at the Knitting Factory on August 8th, which is one of a few shows they have scheduled for the summer and one of two announced shows for NYC (the second is TBA in Brooklyn the next day). Full tour dates are below.

PUNISHMENT DUE:
HARVEY MILK - LIFE.... THE BEST GAME IN TOWN: Stuttering, eclectic, glacially-paced sludge sung by a crew of cro-magnon men. HIGHLY recommended.
NACHTMYSTIUM - ASSASSINS: BLACK MEDDLE PT I: Black MEDDLE is the perfect description. Pink Floyd influenced black metal (saxes and all!) that brutalizes and effectively delves into dark psychedelia.
GRIDLINK - AMBER GRAY: Another short, but worthy grind project by Jon Chang. Bring a hard hat.
GORGOROTH - BLACK MASS KRAKOW 2004 (DVD): A video monument to one of the most controversial moments in an already controversial career. For fans, it's a must.
WITHERED - FOLIE CIRCULAIRE: Round two of compelling blackened grind-crust. A worthy successor to their critically acclaimed Memento Mori.
AMENRA - MASS IIII: Asphyxiating, atmospheric post-metal sludge that falls farther into the void from Mass III.
PROSTITUTE DISFIGUREMENT - DESCENDANTS OF DEPRAVITY: Sickening tech-death. I feel like I need a shower.
HUMANFLY - II: Heavy post-rock influenced sludge doom ala Pelican or early Isis. Recommended for fans of the genre.
DECAPITATED - HUMAN'S DUST (DVD): A well-produced live glimpse at a extremely talented band that who's time was cut way too short.

NEWS BLAST (BEATS):
- Unholy black metallers Watain have scheduled a Halloween 2008 appearance at the legendary Jaxx in Springfield, VA with Withered. Lets hope they try to fit in a few other shows as well..... Full tour dates are below.
- Giant Squid is currently in the studio with Matt Bayles working on their new album. The Ichthyologist due in January 2009.
- Cursed isn't dead? Just a "big fat fucking question mark".
- Orphan and Krallice have scheduled a co-record release party at Union Pool on July 23rd. Tickets are on sale.
- Crowbar is back and will drop a new album in 2009 to celebrate their 20th anniversary.
- Eyehategod side project Outlaw Order have signed to Season Of Mist records and will release their album Dragging Down The Enforcer in October.
- Moribund will re-release the limited Leviathan A Silhouette In Splinters on 7/14 and Azrael's Obdurate / Unto Death on 8/11.
- Conifer will drop Crown Fire on Important Records on September 12th. Eugene Robinson of Oxbow fame will guest, and they have posted the new track "Surface Fire" to their myspace.
- Phil Anselmo's Christ Inversion project will finally be released. Look for a double header of a self-titled record, followed by 13th Century Luciferian Rites on his own Housecore imprint. Get a taste at the Christ Inversion myspace.
- Children played a show at the skate shop KCDC in WBurg. Check out video of it here. Children are scheduled to play Cake Shop on July 26th.
- Japanese badasses Corrupted have will re-release a revamped version of Paso Inferior on LP. Pick it up here, and hope for a good Euro/Dollar conversion. Also out soon... a 500 copy pressing of Corrupted's Nadie 12" on Throne.
- Swedes Switchblade are hard at work on their fifth album, with about "2/3 of the album 'skeleton' written so far".
- Crom will drop Hot Sumerian Nights on wax in the US. Pick it up here.
- Genghis Tron has announced what must be one of the largest remix projects ever... FIVE volumes of remixes.
- Ghostlimb has dropped Bearing & Distance on Level Plane Records. Pick it up at their myspace.
- The Endless Blockade was recently interviewed by Decibel. Check out the unedited transcript.
- Lustmord has announced a new album Other on Hydra Head due July 22nd. Contributors include Aaron Turner (Isis), Buzz Osborne (Melvins), and Adam Jones (Tool).
- Celtic Frost is still alive? Doubtful, Martin Eric Ain.
- Footage from the Biohazard reunion show at L'Amour is available here.
- Napalm Death is currently working on material for their new LP.
- MOD has announced a show with Lair Of The Monotaur at the Knitting Factory on Aug 13th. Tickets are on sale.
- Trash Talk and Architect have BOTH posted a new song to their myspace.
- Saviours have announced a tour with metal vets Iced Earth including a show at Nokia On Oct 16th. Full tour details are below.
- Slayer is working on a new album which is "supposed" to be ready by year end.
- Pitchfork's Show No Mercy is back.... featuring interviews with Wold, Gnaw Their Tongues, Withered & ASRA. Check it out here.
- Cattle Decapitation will enter the studio in August to record the follow up to 2006's Karma.Bloody.Karma.
- Red Sparowes is currently working on material for release on a digital only EP, with Vinyl and CD to follow.
- Metalkult is killing it with the live videos including video from Boris's (here) and Disfear's (here) recent shows at the Knitting Factory and video interviews with Ihsahn (here), 1349 (here) and Satyricon (here)!
- Mastodon previewed three songs from their upcoming album at Bonaroo which were available on youtube, before being pulled down. Based on the life of Grigori Rasputin, Mastodon's new album is produced by Brendan O'Brien.
- Amon Amarth have announced the initial dates for a North American tour with The Absence (details below). Amon Amarth has completed work on their new album, Twilight of the Thundergod.