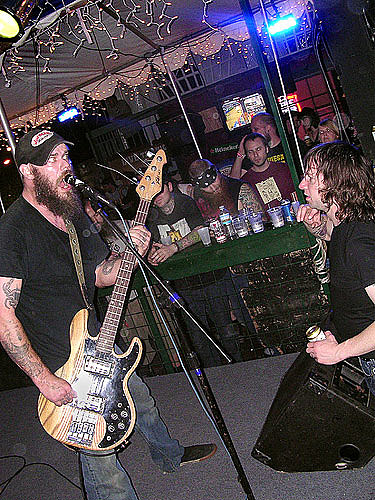 Smoke monsters Weedeater have announced a co-headlining tour with Black Cobra, including one date in NYC at the Knitting Factory! Tickets are on sale. Tour details are below. Black Cobra's Feather & Stone is now available on gatefold LP at their webstore. Weedeater is still touring off the might of God Luck & Good Speed.

Just because At The Gates doubleheader (July 9th & 10th @ Irving Plaza) (and many of their announced dates) is sold out, doesn't mean that the Bjorler twins are forgetting their day job. The Haunted dropped an update on their new record and plans to tour the US in 2009!

Roooooadtrip! Kirk Windstein (Crowbar, Down, Kingdom Of Sorrow) has announced that Crowbar and the legendary Eyehategod will share the stage in New Orleans at One-Eyed Jack's on August 29th for their 20th anniversary show! Crowbar also recently announced that they will tour "every country that's got electricity" with their forthcoming 2009 album.

Totimoshi and Nebula announced a US tour, sweeping coast to coast in early August and concluding in mid-September. NYC has been blessed with August 25th at the Knitting Factory with Tournament. Tickets are on sale. Nebula have just finished an EP, Heavy Psych, though there is no release date as of yet. Totimoshi will drop Milagrosa on July 8th celebrating with a record release party with Big Business and Triclops! Check out the newly minted video "Gnat" featuring Eugene Robinson of Oxbow....

That video, Watain, Graf Orlock, Carcass, Converge, and much much more below...

The Black Metal Militia, aka Watain, will return to the US this fall! SMNnews.com is reporting that the single date at Jaxx (Springfield, VA) on Halloween is part of a larger scale North American tour, with a few more dates released thus far. No NYC date yet, but we will definitely keep you posted.

The undisputed KINGS of cinemagrind, Graf Orlock have announced the completion of their new record Destination Time Today! No official release dates yet, and unfortunately, we won't be able to catch 'em live for a little while..... as they are currently on a SELF-booked tour through Asia & Australia! In true Graf Orlock style, check out the awesome Australia flyer here and the Asia flyer below. Graf Orlock side project Ghostlimb dropped Bearing & Distance in June. Pick it up at their myspace. 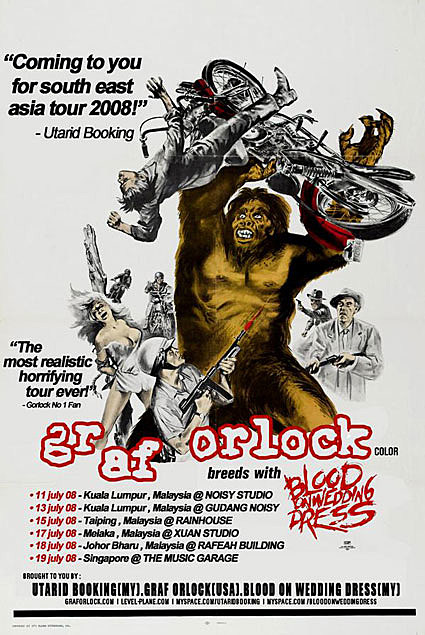 Profound Lore has dropped the new limited edition EP by Cobalt, Landfill Breastmilk Beast. Pick it up at the Profound Lore site. In addition, look for Cobalt's 2007 LP, Eater Of Birds, on gatefold 2xLP this fall on Garden Of Exile Records.

Carcass has added ANOTHER few North American dates for their "Exhume To Consume" tour, as well as a rumored new opener, Finnish grinders Rotten Sound! Rotten Sound are listed at their newly announced date at Sonar in Baltimore.... so does that mean we can expect them to rage with Carcass throughout North America? Lets fucking hope so. Rotten Sound released Cycles earlier this year. Suffocation may or may not be on the bill for Nokia, but Aborted and Necropahagist ARE. Carcass tickets are currently on presale, or you can get 'em $5 cheaper and WITH a limited edition poster if you order through the band! (Thx Klaus)

Jucifer hits the road this week for a mini US tour including one FREE show at Europa on July 11 (as part of the Tora Tora Tora festival) and another (this time, paid) show at the Knitting Factory with executioners Bloody Panda on July 15th (tickets are on sale). Jucifer has also announced a new DVD with a full live show entitled "Veterans Of Volume" which is available on tour or via interweb here.

Witchcraft are making their way back to the USA! No NYC dates to speak of, but the Swedes will be in the southwest and midwest in early August, hitting Ozzfest & Lollpalooza along the way. Tour dates below. The boys also recently posted a cover of Roky Erickson's "Sweet Honey Pie" to their myspace that is available on the Japanese pressing of The Alchemist.

Moody (or just plain mean) dutchmen Anaphylactic Shock released their midtempo crust-meets-doom-y new album, 2000 Years via Hypertension Records. Check out "Ultimatum" available for download above, and pick up the record at Hypertension.

Adai announced the ...I Carry EP, and have been kind enough to drop a taste above in the form of "Hawkins". Produced by the stupid-busy Kurt Ballou, with art from the mega-ridiculous Seldon Hunt, check for it this September on Radar Recordings and look for them on the road this summer, midwesterners (dates below).

PUNISHMENT DUE:
GRAND MAGUS - IRON WILL: Old-school hard-rock/metal in the vein of Dio, Iron Maiden, or Manowar kissed with a little doom. Highly reccommended. Out July 8.
MELVINS - NUDE WITH BOOTS: Much like (A) Senile Animal, the Big Business era of Melvins soldiers on with a worthy follow-up to one of the best records of their career. Out July 8th. Streaming NOW.
V/A - THIS COMP KILLS FASCISTS: A rotten, infested dump truck filled with a thousand tons of memorably heavy grind riffs. 51 tracks, in 56 minutes... you know the deal. Out July 8.
DEADBIRD - TWILIGHT RITUAL: Southern-fried doom battered in Neurosis and Eyehategod. Highly reccommended. Out NOW.
MOSS - SUB TEMPLUM: A dimly-lit, rumbling doom/drone record ala Khanate or sunn 0))). Out July 8.

NEWS BLAST (BEATS):
- King Buzzo of Melvins answers 13 questions for the Deciblog.
- What metal album is the most essential to Matt Pike (High On Fire), Steve Asheim (Deicide) & Rob Halford (Judas Priest)? Check it out here.
- Vader has posted a re-recording of "Dark Age" from 1991's Ultimate Incantation LP at the Regain Records myspace.
- TWO Converge interviews in one week! Jacob Bannon here, and Jacob and guitarist/producer extraordinaire Kurt Ballou here.
- Hey newbies! Stonerrock.com has posted a ridiculously helpful guide for traversing the many albums of Scott "Wino" Weinrich. Check it out here.
- Volume One of the aforementioned Genghis Tron remix series is available for pre-order at Temporary Residence Limited.
- Early Man has signed with The End records. Early Man are playing a KILLER show with Valient Thorr and Monotonix. Tickets are still on sale.
- Earache has signed Chicago's Oceano.
- The Acacia Strain is streaming a song from their upcoming record, Continent at their myspace.
- Rumplestiltskin Grinder has entered the studio to record the follow up to their 2005 record, Buried In The Front Yard. Look for it later this year on Relapse.
- Despised Icon are set to tour Europe with Cephalic Carnage.
- Rob Halford naswered fan questions via a podcast which is available for download on the top of this post. Judas Priest are one of the Metal Masters and are scheduled to play a show at the Hard Rock Cafe NYC.
- Metalkult sat down with Death Angel. Check it out here.

* All dates from July 7 thru August 4 w/ CONVERGE & INTEGRITY