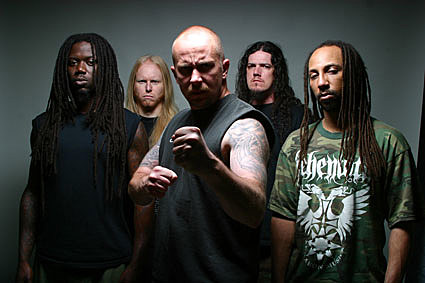 Sunday night (July 13th) at their BB King's show, Strong Island's own Suffocation confirmed it's participation in Carcass's "Exhume To Consume" tour (as we reported earlier). So let's recount, shall we? That makes Carcass, Suffocation, Necrophagist, & Aborted, but there are also rumors circulating that Rotten Sound (who still haven't confirmed) and 1349 are on board as well, bolstered by Sonar's (a club in Baltimore, MD) advertisement for "Carcass, 1349, Aborted, Rotten Sound, and special guest TBA". Considering that Necrophagist & Aborted have been confirmed for the tour, that should round out the lineup. We'll keep you posted, but just the thought of Carcass, 1349, Suffocation AND Rotten Sound... yikes. Sounds awesome.

Early Man have announced that they have signed with The End and will release a new EP this fall produced by Jack Endino! Early Man is currently on the road with Valient Thorr and are scheduled to hit the Bowery with Monotonix on July 25th. Tickets are still available. Tour mates Skeletonwitch have added a few headlining dates around the Early Man tour, including one at the Knitting Factory on July 26th with the mighty Titan and Krallice. Tickets are on sale. More Skeletonwitch headlining dates below. Skeletonwitch hits the road this fall on the Blackest Of The Black tour. Also available over at Metalkult, footage from their April show at BB Kings.

The mayhem-inducing Gaza have announced they will head into the studio, "hoping" to have their new record out in October. Gaza released their last record, the critically acclaimed I Don't Care Where I Go When I Die in 2006. Me = stoked.

Cursed, At The Gates, Agnostic Front and much much more below...... 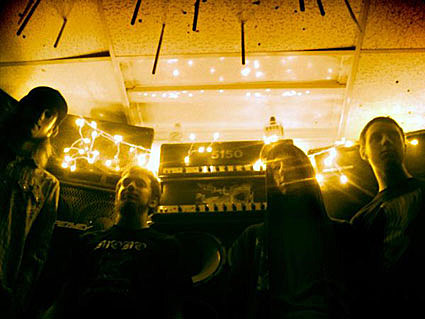 Now here's a band to look out for, or cross the street when they come your way... Baton Rouge's Thou takes a cue from the asphyxiatingly slow doom of Louisiana brethren Eyehategod, pounding away at thunderous riff after riff. The band initially dropped Tyrant on One-Eye Records (now long gone), but will see a repress by the dark forces at Southern Lord. The band also just dropped Peasant via Autopsy Kitchen (buy it here) with the vinyl on Level Plane later this year, but the band has made two tracks available for download above and the whole thing available on their site! Download it, be sickened/bowled over, and support the band by buying the CD/wax or catching them on tour!

Cult Of Luna dropped Eternal Kingdom in the US last Tuesday (July 8th), and we have two copies up for grabs! Just email us at BVCONTESTS@HOTMAIL.COM (subject: Cult Of Luna). Winners will be picked at random and contacted.

a href="http://www.myspace.com/astormoflight">A Storm Of Light has announced a that they will record two songs with Joel Hamilton at Studio G for an upcoming split with Nadja! The release will include two new songs by A Storm Of Light as well as one Nadja track. There are also plans in the works to remix the other's song, in hopes of turning it into a double LP. Look for it this fall on Robotic Empire.

Original members Kelly Shaefer and Steve Flynn of Atheist are currently working on new material! No word on what (if anything) that might mean, but there are slightly more details at Blabbermouth.

Young Widows have announced that they will drop their new album, entitled Old Wounds, this fall on their new home Temporary Residence Limited. Old Wounds will be released near the same time that Young Widows will do a series of four split seven-inches with their new label. Details to come. Young Widows side project Brain Banger have announced a tour of the Northeast and Midwest. Check out tour dates below and help 'em book a show in NYC!


The secret - Funeral monolith from Nocturnal Movies on Vimeo.

Sourvein has announced that they have signed to Candlelight Records will release a new EP, Imperial Bastard, which will hit the streets on September 30th. Sourvein dropped the Ghetto Angel EP earlier this year.
Viking metallers Amon Amarth have OFFICIALLY announced their US tour, including an NYC date at Irving Plaza (no ticket info yet). Dudes in loin cloths and chain mail are stoked. Support comes from Belphegor, Ensiferum, and The Absence.

Black Elk will drop their follow up to their massive 2006 S/T debut on Crucial Blast this October 21st. Always A Six, Never A Nine will no doubt be showcased at some of their current west coast dates, but also look for the band to hit the road a little harder when Always drops. Meanwhile, dig on Black Elk's "Eyebone" from their S/T debut above.

Zozobra (featuring Caleb Scofield of Cave-In and, on this album, Aaron Harris of Isis) will drop "Bird of Prey" on July 22nd on Aaron Turner's (also Isis) Hydra Head records. Dem boys are currently streaming "In Jetstreams" over at their myspace, but you can download the track over at Metalsucks.

At The Gates have launched a North American Tour Diary at their myspace, detailing their two night stand at Irving Plaza. In addition, you can check out a ton of photos from the Worcester, MA show over at ReturntoThePit.com. In related news, the Bjorler twins (of At The Gates) have announced that The Haunted their new album, (due for Century Media this October) entitled Versus, will mark a return to their "trademarked aggressive, thrashy sound".

Agnostic Front has sandwiched an a few East Cost dates in between their current European Tour and an upcoming tour of South America. Those east coast dates include one "For Their Family" at the Knitting Factory on August 21st! Tickets are on sale. Support comes from Jamey Jasta's solo band called, you guessed it, Jasta and Malas Noches.

Shai Hulud teamed up Q-Boro's own Full Blown Chaos, touring coast to coast on the strength of Shai Hulud's new album Misanthropy Pure. Along the way they will cross path's with Philly's Reign Supreme who are currently on a North American tour of their own. Tour dates for both are below.

Lemmy (Motorhead) got into a liiiitle bit of hot water in Deutchland last week after an investigation was launched into whether he committed a crime for possibly wearing a Nazi hat in a German photo shoot. Eeek. Of course, lord knows the man has an obsession with war imagery.

PUNISHMENT DUE:
It's a slow week for releases, so instead, I would play catch up with some of the records in my previous "Week in Metal" posts that you might not have scooped up already! Or, check out one of the other great non-heavy releases here!

NEWS BLAST (BEATS)
- Integrity has dropped a little video snippet of their recent European tour with Converge, Coliseum, and Amenra. Check it out here.
- Caina has posted a new track from his new album, Temporary Antennae. Download it above.
- Black Market Activities labelmates Architect and The_Network both have posted pre-production rough mixes of new songs.
- ASRA has announced a show at the Charleston on July 26th. They play another in the same spot 3 weeks later with Gridlink, Hayaino Daisuki & Weekend Nachos (Aug 14th)
- Black Tusk has added a few new tour dates, including a show at the Knitting Factory on August 24th. Dates are below, ticket info is forthcoming.
- Ben Weinman of The Dillinger Escape Plan will guest appear on Italian metallers Ephel Duath's new record for Earache. Look for Through My Dog's Eyes this October.
- Trap Them has announced that Seizures in Barren Praise will hit the shelves this fall.
- Benediction has announced a split 7" with Wolfbrigade, limited to 2500 pieces (500 in picture disc form) on Feto Records (Shane from Napalm Death & Mick from Anaal Nathrakh's label). Benediction has a new record on the way and Wolfbrigade is playing the Knitting Factory on October 2nd (still no ticket info).
- Krallice is available now at the Profound Lore store.
- Dismember & Augury have announced a Canadian Tour in October and November. We have tour dates down low. How about some USA love, yo?
- Satyricon is currently working on material for what will see the light of day on November 3rd via Roadrunner Records and have announced a tour of the US supporting Cradle Of Filth in Jan of 2009.
- Ceremony has posted a new song on their myspace, "He God Has Favored Our Undertakings", on their myspace from their current 7" and upcoming record, Still Nothing Moves You due August 5th on Bridge 9 Records.
- Tickets are on sale for the Impaled / Phobia show that we announced back in March at Knitting Factory on September 8th.
Wolves In The Throne Room has made video from their Roadburn appearance available here.
- Zao has announced that they are heading to the studio to record their new album.
- New England Death Fest set times have been posted.