Gojira's The Way Of All Flesh 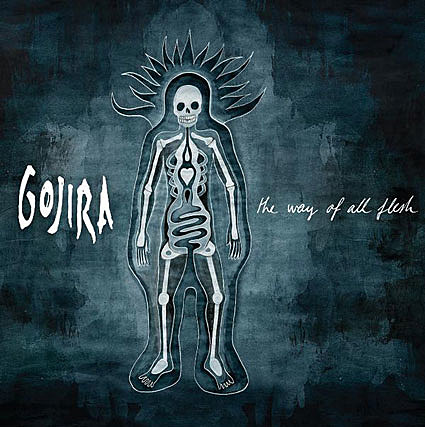 Gojira has finally announced news on it's latest punch to the gut, The Way of All Flesh! The much anticipated follow-up to From Mars to Sirius will drop on October 13th on Prosthetic, and look for the band to hit Europe with In Flames in late Sept/Oct (tour dates below). Joe Duplantier played on the Cavalera Conspiracy album, who recently played Irving Plaza with The Dillinger Escape Plan.

As we discussed before, Intronaut are on tour with Behold The Arctopus and Mouth Of The Architect (Deadsea and Wetnurse are also on the colossal NYC bill), packin heat from the forthcoming Prehistoricisms on Sept 16th. Check out "The Literal Black Cloud", available for download above!

KEN mode dropped their new record, Mennonite on their own label, Arctodus Records. Pick it up here. The follow-up to their 2006 release on Escape Artist, Reprisal, KEN mode draws from the glory days of Am-Rep and noise punk, adding a brute force Mastodon-type approach. We have "The Romanticist" from Mennonite available for download above, but be careful, it's mean & nasty.

much, much more below...

The Gates Of Slumber - "Trapped In The Web"

Mastodon has described their upcoming record, which they "hope to have out in January 2009", "by far the biggest departure from record to record that we've done". Check out the entire interview here.

MetalInjection has dropped two tasty morsels in one bite. In a recent chat with Randy Blythe during a Halo Of Locusts (his side project) show, it was revealed that Lamb Of God are heading back into the studio this fall, and because they are, they turned down an opening slot on an upcoming Metallica tour.

The recently reunited Cynic has announced the release of their new album, Traced In Air, on October 27th via Season Of Mist. The reunited Cynic, made up of Focus-era members Paul Masvidal, Sean Reinert, and Sean Malone as well as new member Tymon Kruidenier, recently completed the new album, spanning 8 songs and clocking in at 35 minutes.

Kreator, back in the studio. 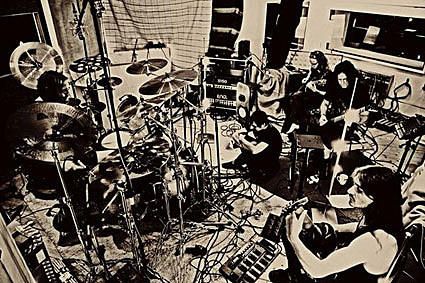 Misery Index has posted a "Occupation" from the upcoming Traitors (Sept 30th on Relapse, preorder here) on their myspace page. The band is currently on tour with Origin and Abysmal Dawn.

Doomers Orange Goblin have announced that they are at work on a new album, which they look to record in spring 2009 for release that summer. In addition, look for Rise Above to reissue the bands earlier work in a "deluxe" format with demos, photos, live recordings, as well as on gatefold vinyl.

Psyopus is also currently in the studio working on a new album. The band is gearing up for a tour with Fuck The Facts,War From A Harlot's Mouth, and Left To Vanish.

Protest The Hero has announced a show at Irving Plaza on October 30th opening for Unearth with The Acacia Strain, Whitechapel, and Gwen Stacy. Tickets are currently on presale (password = Panther), and go on sale August 1st. The show is part of a larger US tour, dates are below. Protest The Hero are slated to drop an EP, namely the Sequoia Throne Remix EP, on August 5th via iTunes.

PUNISHMENT DUE:
Limited number of new releases this week, so I have tacked on a few short reviews of great heavy records that we missed.

TRASH TALK - S/T: Caustic, furious, and in your face hardcore produced by Steve Albini. Hows about doubling it in length next time?
OTESANEK / LOSS / ORTHODOX / MOURNFUL CONGREGATION - FOUR BURIALS: Doom record of the year? I've heard that description and while I don't fully agree, Four Burials is an excellent and diverse (cellos!) doom affair.
PLAYING ENEMY - My Life As The Villain: The final document (PE called it quits in 2006) from the chaotic post-hardcore/noise/mathcore band featuring ex-members of the mighty (and also fallen) Rorschach. Highly recommended.
PYHA - THE HAUNTED HOUSE: Destructive noisy black metal conjured up by a 14-Year Old. Gives new meaning to the term "teen angst".
VALIENT THORR - IMMORTALIZER: It's hard to beat a Valient Thorr live show, and Immortalizer doesn't quite get there, but the ride is definitely fun.
VICTIMS - KILLER: Simple crusty hardcore that f'n rips, much like contemporary big leaguers Disfear or Coliseum.

NEWS BLAST (BEATS):
- Newly renovated Hospital Productions store is now open. Same location, a lot bigger.
- Krisiun is currently streaming four new songs from their upcoming record Southern Storm on their myspace.
- Extreme Noise Terror have posted two new tracks from their forthcoming album Law Of Retaliation (due in October) to their myspace page.
- Crucial Blast have released an extremely limited CDR (300 copies) from Wildildlife's WFMU sessions. Pick it up here.
- As reported a month ago, Napalm Death is currently working on their follow up to Smear Campaign, having written "10-12" new tracks and heading to the studio.
- Shai Hulud has pulled out of their own headlining tour, remarking that they plan to be "back on the road as soon as they can".
- The Rotted has parted ways with bassist Wilson.
- Phil Anselmo is reportedly working on an autobigraphy.
- Amon Amarth have revealed the artwork to Twilight Of The Thunder God. Check it out here.
- Dismember has finally released the vinyl version of their self-titled album from earlier this year.
- Clutch's new CD/DVD, Full Fathom Five, is up for preorder. Click here for the CD and here for the DVD. Click here to play the ecard.
- Amenra has posted a second song ("Aorte Nous Sommes Du Meme Sang") from their awesome Mass IIII to their myspace.
- Heaven & Hell are "six or seven songs" into a new record. Look for some of those songs to (hopefully not) pop up during their appearance at Metal Masters. Tickets are still available.
- Wolfbrigade has cancelled their US tour citing the recent announcement about the closing of Profane Existence and subsequent halting of all production of records going forward. The band is currently looking for a home for their new record Comalive.
- Unearthly Trance has announced a show at Supreme Trading opening for crust-punks After The Bombs on August 9th, along with Atakke and Abaddon
- Soilent Green will play a few shows supporting Hatebreed, who is celebrating the release of their new DVD. Check out the tour dates below, including shows in Poughkeepsie, Long Island, and Hartford.
- Atheist's Kelly Shaefer has offered an update, stating that they have worked on new material, have a live DVD in the works, and are planning US & European shows in line with the 20th anniversary of their debut Piece Of Time.