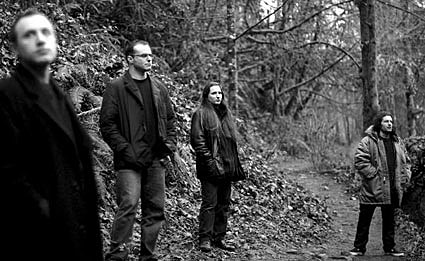 Folkin' black proggers Agalloch has announced that they are at work on their fourth LP, the follow-up the the critically acclaimed Ashes Against The Grain! The band recently parted ways with The End and "have received several offers ranging from the ridiculous to the very interesting" with respect to a new home, but no decision is expected until 2009. Meanwhile, Agalloch also announced the release of The Demonstration Archive, a retrospective of songs from 1996 - 1998 before they signed to the label. For more info on The Demonstration Archive, including how to pick it up, head here.

As we announced a couple weeks ago, doomy instrumental trio Capricorns have released River Bear Your Bones in jolly old England, but the US will see the record on September 30th. Have no fear, as we have posted 25% of the whole record (above) for you to download!

Intronaut's new record, Prehistoricisms, is up for preorder, with or without a limited edition tee ($4 more). Check out "The Literal Black Cloud" from Prehistoricisms here. 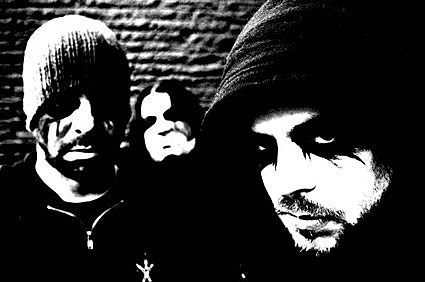 World, Black Anvil. Black Anvil, world. I wish it was that easy, because word needs to get out on these grim lords constructed from ex-members of Kill Your Idols. Drawing from early black metal and thrash and with only an occasional foray into Emperor-style tremolo picking, their new LP Time Insults The Mind is an unholy creature of shadow. Check out "Ten Talons Deep" available for download above and the video of the band tearing through "Deathsomnia" (also from Time...). and pick up the record at Momentum Records when it drops. The band is also playing Traxx in Ronkonkoma on August 23rd and The Charleston on Sept 30th.

That video, plus Neurosis, Coalesce, Converge, Municipal Waste, Rosetta, sunn 0))), Corrupted and more after the jump...

Rhode Island's Tides have announced a show on August 6th with Giant and The Helm @ The Stolen Sleeves Collective (538 Johnson Ave, Brooklyn, NY). Show begins at 6PM SHARP. The show is part of a set of dates that Giant has lined up for the next week. Dates are below.

Coalesce have announced they are working on a new album! Fifteen songs completed in five days, the band will grind away in the studio with hopes of completion of the new record by late fall.

Municipal Waste has announced that they will reform the Waste Em All lineup to play a one-off show at AlleyKatz on August 15th in their hometown of Richmond VA! The show is part of the Best Friends Day Weekend and will also feature Paint It Black and Caustic Christ among many others. 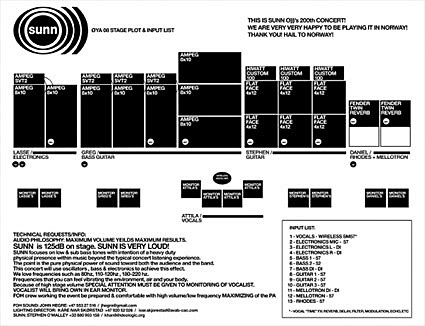 In case you missed it, sunn 0))) recently announced a few shows to commemorate The GrimmRobe Demos. Tickets are on sale. Also in the "maybe you missed it pile", Young Widows has dropped two new tracks from Old Wounds here. Old Wounds is currently up for 3LP + CD (!) preorder.

Converge is currently working on their new album, that is, when Newton isn't out with Doomriders, Bannon isn't prepping his solo album Wear Your Wounds, Koller isn't touring with Acid Tiger or United Nations, and Ballou isn't producing/engineering records at God City.

Rise Above is currently taking pre-orders for the Electric Wizard and (now defunct) Reverend Bizarre split 12". Pick it up here.

The Atavist/Nadja collabo record, II: Points At Infinity is out NOW at Profound Lore.

Rosetta spend a long weekend with Balboa and North touring the East Coast, starting at Fontanas on August 22nd (as announced in May) and concluding in their hometown, Philly.

Magrudergrind have announced that they are working on a new full length for possible release this fall/winter, as well as a live recording that should materialize on Power It Up Records this fall. The band is featured on the recently released This Comp Kills Fascists grindcore compilation.

Interview with Mastodon's Troy Sanders. Mastodon is confirmed for the Melvins/Mike Patton curated ATP's The Nightmare Before Christmas....

It's a while away, but that doesnt mean we can't get excited about the 2009 Maryland Deathfest (May 22-24, 2009) and the confirmed lineup so far:
ASPHYX (Netherlands)
IMMOLATION (New York)
BRUTAL TRUTH (New York)
ABSCESS (California)
HAIL OF BULLETS (Netherlands)
TODAY IS THE DAY (Tennessee)
FLESH PARADE (Louisiana)
JIG-AI (Czech Republic)
CROWPATH (Sweden)
ENTRAILS MASSACRE (Germany)
ANTIGAMA (Poland)
MAN MUST DIE (Scotland)

Nuclear Blast have posted a free label comp featuring Meshuggah, Keep of Kalessin, Testament, Arsis, Kataklysm, and many others. Check it out here. Kataklysm & Keep Of Kalessin will hit the road with Dying Fetus and Eluveitie this fall, including a date at Gramercy. Full tour dates are below.

Thou has copies of their To Carry a Stone 7" available at Noxious Noize. The band is writing material for a new LP, "possibly" a new EP ,and splits with Pygmy Lush, Salome, Moloch, Human Intruder, This Time Tomorrow, Mohoram Atta, and The City is the Tower. 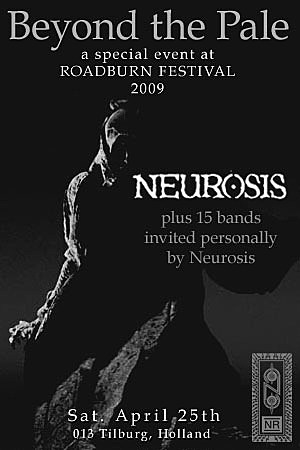 Neurosis have announced that they will play the 2009 Beyond The Pale festival at Roadburn in Tilburg Holland, curating one night. Bands will be announced soon, but mark your calendars for April 23-25 of next year. In related news, Shrinebuilder, the supergroup featuring Scott Kelly (Neurosis), Al Cisneros (Om, Sleep), Wino (The Obsessed, Saint Vitus, Place Of Skulls), & Dale Crover (Melvins) have their own myspace page. Baby steps fellas, baby steps.

Integrity has posted a 5-part video podcast documenting their tour with Coliseum & Converge (and Amenra on a few select dates). Check it out here.

Willowtip is readying pre-orders for Phobia's 22 Random Acts of Violence (both Phobia tracks above are from the record), which isn't available as of press time, but will be here. The band is on tour with Impaled, Malignancy, Illogicist, and Maruta. Tickets are still available. In related news, Gadget has completed recording for the Phobia/Gadget and have posted two new tracks to their myspace.

PUNISHMENT DUE:
A few interesting releases this week, but much like last week, we'll catch up on some of the great releases that were missed.

Krallice - S/T: A virtuosic black metal masterpiece. Easily one of, if not THE, best USBM album of the year. A must.
Krisiun - Southern Storm: Full-throttle death metal from these dependable Brazilians.
Zozobra - Bird Of Prey: The heaviness is undeniable, the vocals are beyond furious, but the songs just didn't stick for me. That said, there are some great moments on this record and it definitely warrants a free listen.
Ufomammut - Idolum: Heavy heavy thundering doom that can get a bit long winded (see the last track) but definitely are onto something great.
5ive - Hesperus: Proggy, introspective, and heavy instrumental music in the vein of Pelican, Mogwai, or Isis. Highly reccommended.
Anaphylactic Shock - Two Thousand Years: A frightening cocktail of early Entombed, black metal and hardcore. Reccommended.
Transitional - Nothing Real Nothing Absent: Epic ambient layers of electronics, guitar, and bass featuring Dave Cochrane and Kevin Laska. Out now, check out the excellent "This Paradise Pt. 1" above.

NEWS BLAST (BEATS):
- Doomers Candlemass have announced the new EP Lucifer Rising, tenatively due in early October.
- Baroness has lined up a handful of dates with Genghis Tron as a prelude to their appearances with Opeth and High On Fire.
- Corrupted has reissued the Paso Inferior CD. Pick it up here.
- We announced most of 'em before, swing down below for the latest Witchcraft tour dates.
- Shane from Napalm Death has issued an update from the studio.
- Hot off the presses, Volume 2 of the Genghis Tron Remix project is available here. Volume 1 is still (barely) available here.
- Carcass has added a date at Circo Volador in Mexico City, MEX on September 16th. Tickets are still available for their show at Nokia.
- Anaal Nathrakh has dropped 500 copies (300 smoky, 200 white) of the vinyl version of Hell Is Empty All The Devils Are Here. Pick it up here.
- The Sword has added a handful of dates around their tour with Clutch & Graveyard. Check em out below. The band has also dropped the red vinyl version of Gods Of The Earth.
- Gorilla Biscuits have posted a live version of "Distance" from 1991 and "New Direction" from CBGB in 2005 to their myspace. GB are confirmed for Lisk Fest in CA.
- Extreme Noise Terror have uploaded two new tracks "Believe What I Say" & "Parasites" to their myspace.
- Check out one of my favorite music documentaries of this year, Heavy Metal in Baghdad, streaming for FREE.
- Metallica's Death Magnetic has an official release date, Sept 12th.
- Cable has announced three new shows on the east coast in October. Tour dates below.
- Black metaller Brown Jenkins is currently recording a new EP, Welcome The Bitterness, as part of a HP Lovecraft tribute series for God is Myth. Brown Jenkins is the name of a Lovecraft character.
- Animosity, Decrepit Birth, and Antagonist have lined up a few shows on the west side. Dates are down below. Animosity have a new remix record on the way with Drumcorps, Altered Beast, which is available for pre-order here.
- Deathwish Inc. has signed Rot In Hell from the UK.