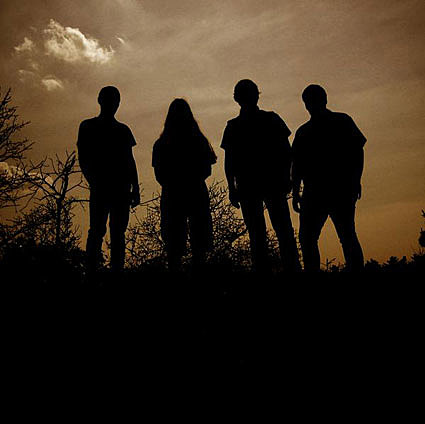 Influential doomers Grief are back from the dead! This time, the band have lined up a show in Baltimore (@ The Nowarehouse on 10/24) and Philly (@ The Khyber Pass on 10/25 with Black Cobra) in preparation for a European tour with the mighty Trap Them (European tour dates forthcoming). Meanwhile, guitarist/vocalist Jeff Hayward (formerly of the equally menacing Disrupt) is touring with his new band, the oh-so-crusty Morne, who are poised to attack the east coast and as far as Minneapolis during a ten-city tour (dates below) including one date at Cake Shop on Sept 28th with Attake, Cop On Fire, and Lost Cause. Morne will be promoting their recently released demo (out now) and the band was kind enough to drop a taste here! Check out "Machine" downloadable above, and check them out on tour.

Earth have added a few shows including a date at Columbia University (10/17), another at Wesleyan University (10/18), and a date at Union Pool (10/14), in addition to the previously announced date at the Knitting Factory with Arbouretum (10/19, tickets here).

Pelican announced a show at the Bowery Ballroom on 11/2 and some other tour dates.

From The Nursery Records, current home of locals Orphan, will drop 12" of Melvins tracks recorded during the Nude With Boots sessions. Look for it hopefully by the end of this year.

Hey Colossus is currently working on a follow up to Happy Birthday, in addition to their upcoming split 7" with Tractor. For the unfamiliar, these Londoners play a ultra-heavy experimental sludge-doom that is as comfortable with the thunder as it is with the Their latest testament to discontent, Happy Birthday is on Riot Season (pick it up here), and the band have hooked us up with "Tight Collar" available for download above!

Hey Colossus - I Am The Chiswick Strangler LIVE

Hammers Of Misfortune have posted a pair of new MP3s, one from each of their upcoming albums (Fields / Church Of Broken Glass) for Profound Lore / 20 Buck Spin. Check 'em out and download above!

Ben Weinman of The Dillinger Escape Plan on the rumored departure of new drummer Gil Sharone:

"He didn't leave and we didn't kick him out. He will be busy, though, working with his other band (Stolen Babies) a lot over the next year, so I am talking to other dudes both for Dillinger possibilities and just for me to play with on other creative projects. We still may be touring and writing with Gil, though. Kinda in the air. No big drama though or anything."

So, I guess that means maybe he isn't not out of the band, perhaps? Reportedly dummers Marco Minneman (Ephel Duath, Necrophagist) and Raanen Bozzio have been named as possible replacements, should one be needed.

The scariest (Jarboe) photo ever? 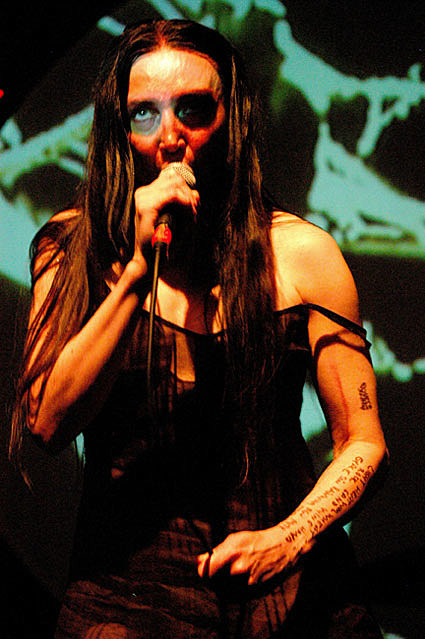 As we reported back in March, Jarboe has an album on the way with co-conspirators Attila Csihar, Phil Anselmo, Josh Graham, and host of others. Mahakali, named after the mythical Indian goddess of death and destruction, is due on Oct 14th via The End. Check out the cover art here and scoot on over to The End's myspace to sample "The House Of Void". Color me stizoked.

Bongzilla (with Dixie Dave Collins of Weedeater and ex-Buzzov*en & Sourvein fame) have reformed to play a one off gig in Madison, Wisconsin on 9/20 at the Forward Festival with fellow reformed Madison-ians Killdozer. (Thanks Bessie!) 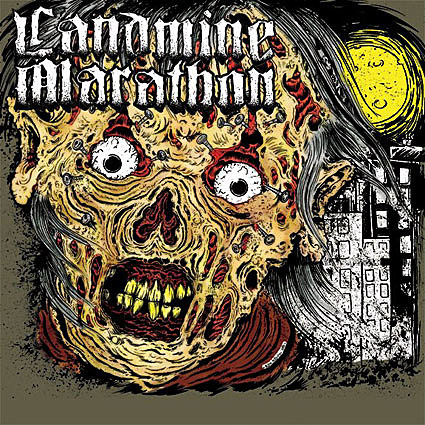 Pouring salt into an gaping wound, Nachmystium announced that they are also on board for the Chicago Nifelheim date. The Nifelheim show precedes their appearances with Opeth and High On Fire, as well as newly announced dates with Wolves In The Throne Room. Wolves In The Throne Room is currently on the hunt for a bassist. Will Lindsay of WITTR's other band, Middian, has dissolved but his Middian bandmate Mike Scheidt has reunited with Yob.

If you missed the mighty Harvey Milk when they played Europa and the Knitting Factory, you may be in luck. A little birdie told me that "da Milk" are scheduling another date in the five boroughs before the end of the year.

Saviours have added a new guitarist, Sonny Reinhardt of Watch Them Die. The band is currently working on their follow-up to Into Abbadon, due in 2009. Check out video of a recent set they did at Amoeba Music.

Finnish black metallers Horna have announced the Blood Fire Death Tour (sounds tempting so far!) of the US with Blood Stained Dusk and Azrael. So far none of the venues have been booked, so view this as a tenative schedule (I'll report back the fo' real sched when it happens) but their itinerary includes on date in NYC on 11/16. We'll keep you posted. Another band with a currently tentative tour schedule, Today is The Day, have announced a string of tour dates, including NYC on Nov 5th. Keep your schedule clear.

ASRA have lined up a show with fellow local grinders Dissasociate, Defeatist and Baltimore's Triac at ABC No Rio on Nov 15. 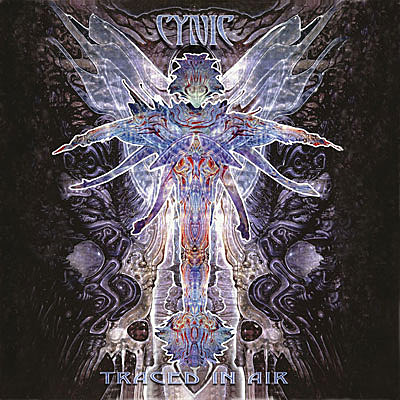 If you missed it, Grails have a new album on the way. Check out "Reincarnation Blues" available for download above!

Speaking of Atakke, the band will hit the Knitting Factory on Nov 2nd supporting thrashy crusters Hellshock. Tickets are on sale. November 2nd marks five years since Hellshock swung through the tri-state, and the band have tacked on a few additional east coast dates as well. Full tour schedule below, check out the flyer for the show here.

Metallica tickets are currently on presale for their upcoming shows.

PUNISHMENT DUE:
Toxic Holocaust - An Overdose Of Death: If you can get past some of the ridiculous lyrics, this is quite possibly the best of the new wave of thrash records to drop this year.
Sigh - A Tribute To Venom: If you are a fan of either Venom or Sigh, this limited edition EP is worth a look just for the reimagination of the classic Venom tracks. More interesting than your average covers record.
Khold - Hundre Ar Gammal: Groovy Celtic-Frost style black metal. My only complaint is the vocal levels seem too high in the mix (might be less of a complaint if I could understand Norwegian).

NEWS BLAST (BEATS):
- The Red Chord gave guitarist Mike Keller the boot.
- Misery Index are streaming a second track, "Ghosts of Catalonia", from their upcoming Traitors.
- The new Across Tundras disc has been delayed until Oct 8th due to "circumstances out of our control".
- Soulfly is hitting the road in the USA and a few dates have trickled out so far, including Nov 14th at the Blender (tickets on sale 9/12 at noon). Full tour listing so far below.
- Amenra is currently booking a tour of the East Coast in Feb of 2009, including two tenative dates in NYC.
- Krallice are playing with Lightning Bolt and (the recently added) Growing.
- Decrepit Birth have scheduled a single date with The Faceless, Abigail Williams, Neuraxis, and Veil of Maya at the Blender Theater on on Oct 27th. Tickets are on sale.
- Destruction is currently streaming the title track from album, D.E.V.O.L.U.T.I.O.N..
- Orange Goblin signed on with Candlelight Records.
- Spylacopa posted a new track to their myspace. Spylacopa is John LaMacchia (Candiria), Jeff Caxide (Isis), Greg Puciato (The Dillinger Escape Plan) and Julie Christmas (Made Out Of Babies, Battle Of Mice).
- Lambgoat interviewed Alex Skolnick of Testament.
- Translation Loss is currently taking pre-orders for Rosetta's Wake/Lift on vinyl and Cable's CD reissue of Variable Speed Drive.
- Zimmer's Hole have dropped off of the Sigh & Unexpect tour due to immigration issues.
- The Haunted posted an e-card for their upcoming record Versus. Check it out here.
- Check out Witchcraft preforming "No Angel or Demon" acoustically here.
-Graveyard was interviewed by Crustcake.
- InvisibleOranges interviewed Martin Van Drunen of Hail of Bullets.
- Check out a batch of live photos from Immortal's performance at the Shadow club in Moscow, Russia on Aug 29th
- From A Second Story Window are no more.
- Animosity have posted their remix album with Drumcorps for free download here.