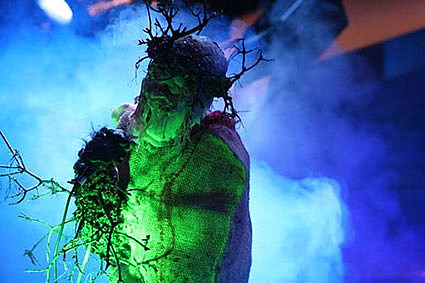 Highly influential black metallers Mayhem have announced that they will tour the US in spring of 2009! The 21 date tour will be announced soon, but in the meantime, look for the band to announce a new guitarist to replace departing axe-slinger Blasphemer. Mayhem's Attila Csihar lent his unholy vokills to the new Jarboe record Mahakali due Oct 14th on The End. Skip on down for video of Thurston Moore discussing Mayhem.

Doomriders are currently grinding away at their new album due on Deathwish in 2009! In the meantime, look for the band to hit the Autobahn on a European tour with Disfear & SSS. SSS is currently streaming two new tracks from their upcoming record The Dividing Line. Doomriders recently played Europa.

Metallica is streaming six tracks from Death Magnetic. Check out my review for their new record below.

Guitarist Kris Norris has left Darkest Hour and is "actively pursing some producing routes and any band that might want a guitarist". 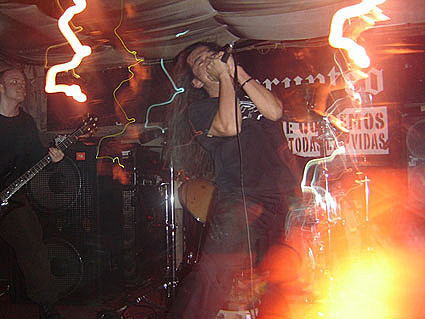 The extremely elusive Japanese doomers (in fact, the above is one of the only pictures I have ever found of them), Corrupted announced a brief West Coast tour with Asunder, check out the flyer here. Asunder's Works Will Come Undone recently dropped on vinyl via Kreation Records, pick it up here. Corrupted's (current? these guys are elusive I tell ya!) bassist Lowell Isles's old band, YOB recently reformed.

Vikings Amon Amarth are streaming a new track, "Guardians of Asgaard", from their upcoming Twilight Of The Thunder God.

Bloodbath, the death metal supergroup featuring Mikael Åkerfeldt (Opeth), Anders "Blakkheim" Nyström (Katatonia), Jonas Renkse (Katatonia), Martin "Axe" Axenrot(ex-Witchery, Opeth), and Per "Sodomizer" Eriksson, will drop their new studio album The Fathomless Mystery on Oct 28th via Peaceville Records. Filled with ""nothing but hateful brutality", check out "Slaughtering The Will To Live" available for download above and stream another track, "Mock The Cross", at their myspace. 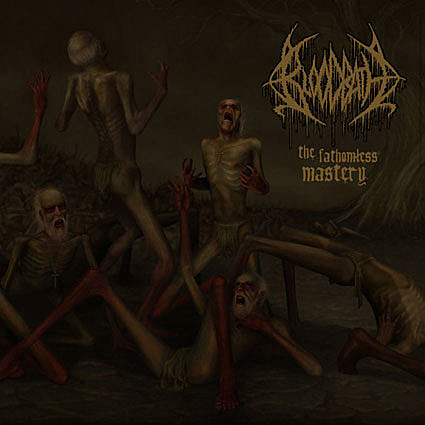 Brooklyn boys Tombs have completed construction of the man-beast known as Winter Hours, their debut for Relapse. Recorded at the Etching Tin Studios in Richmond, VA with engineer Ian Whalen, look for it to drop in February 2009. The band is currently on the road in Europe, but have a single date planned at Fontana's in NYC on Oct 8th with Unearthly Trance and Black Anvil. Full tour dates are below. Speaking of Black Anvil, check out the interview the band did for Legacy fanzine.

20 Buck Spin have announced the debut album by doomy newcomers Samothrace, Life's Trade. Produced by the mighty Sanford Parker (member of Minsk, touring member Nachtmystium), if "Slaughter The Will To Live" is any indication (get it above), Life's Trade is gonna be massive. Samothrace is about to embark on a highly ambitious 70 city tour including a single night in NYC at the Precious Metal party at Lit on 10/6. Swing down low for the full tour schedule.

Alabama Thunderpussy have called it quits. Frown. At least Kyle Thomas can focus on Exhorder now.

North played a stellar set with Rosetta and Balboa at the Unsound party last month... heavy, spacey and just plain powerful. Their newest joint, What You Were, recently dropped on Cavity Records, and band have been kind enough to drop off "Eidolon" for download above! 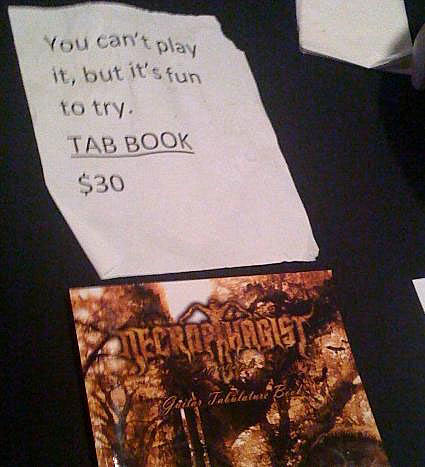 Danzig's lineup up for the Blackest Of The Black tour is:

Battlefields are currently working on their new record, which is "60+ minutes worth of new material" and will consist of "5 songs, broken down into 8 tracks" and with "songs ranging from 16 minutes in length to a mere 5". The artwork will be done by reknowned artist Paul Romano (artwork for Mastodon, Godflesh, The Red Chord). Look for the band to drop a preview track on myspace next month.

Hardcore youth crew Internal Affairs have called it quits, but not before hitting the east coast for one last hurrah including a date in Long Island, NY on Jan 28th, 2009. Tour dates are below.

Thurston Moore discussing Mayhem - Is he a fan, or dissing them?

Italians The Secret are currently working on their new album and are streaming a pair of new songs at their myspace. The Secret recently dropped Disintoxication and posted a video for "Funeral Monolith".

As we all expected, Celtic Frost has officially disbanded.

Javelina have added a handful of East Coast tour dates in Mid-November that will take them as far south as Florida. Check out full tour dates below.

Original Sodom drummer Chris Dudek, (aka Witchhunter) passed away on Sept 7th. No further details are available. Witchhunter recently appeared on The Final Sign Of Evil, the re-recording of the classic Sodom EP In The Sign Of Evil with the rest of the original lineup. R.I.P. Witchhunter.

Finns Horna announced their new album, Sanojesi Äärelle. Details are sketchy, but the band have released their artwork for the double disc which is due November 18th via Moribund. 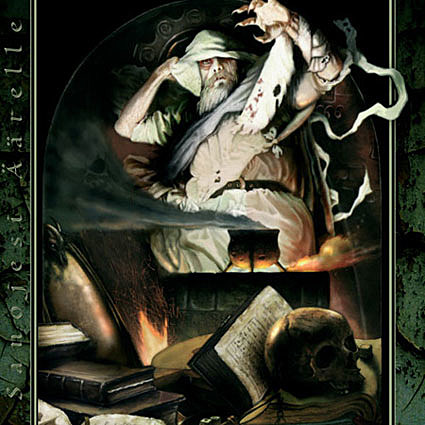 "I just wanted to put this out to let people know I'm going to be giving lessons on the upcoming Obituary U.S. tour. I'll take 2-3 people per day, and it would be better if anybody interested was at an intermediate-to-advanced level. If you're interested, contact David Pigg at davidpigg@sbcglobal.net."

Every Time I Die have announced a new US tour with punks The Bronx and metalcore dudes Stick To Your Guns, and though there are new NYC dates to speak of, the have announced a date in Farmingdale, NY on 11/22 and another in South Hackensack, NJ on 11/21. ETID are currently free agents.

H2O have scheduled a tour with Bane, Energy, and Cruel Hand including a single date at Irving Plaza on 11/23. Tickets are on sale. 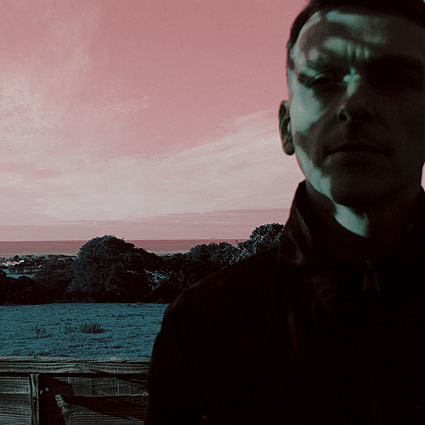 Jesu is currently streaming the new EP Why Are We Not Perfect? here.

Mastodon, Deerhunter, and comedians Brian Posehn and Brent Weinbach have teamed up to mark the 15th anniversary of Chunklet Magazine. Taking place over two days at the 40 Watt in Athens, Deerhunter & Weinbach will play on the first night, Oct 10 (tickets here), with Mastodon & Posehn closing the festivities on Oct 11th (tickets here).

Burst is streaming three songs from their upcoming Lazarus Bird.

Sunn O))), live at the Øya Festival, Oslo

PUNISHMENT DUE:
Motorhead - Motorizer: Motorizer is exactly what you think it would be; a simple, heavy, and somewhat predictable effort from the kings of what they do.
Intronaut - Prehistoricisms: Going decidedly more "tech" and less heavy this go around (which is definitely not a bad thing), Recommended, though I can't say I enjoyed it as much as Null or The Challenger EP
Light Yourself On Fire - Intimacy: Check out my thoughts here.
Obituary - Left to Die: With two new songs, one cover (Celtic Frost's "Dethroned Emperor"), and one re-recorded classic, it's worth a listen for "Slowly We Rot" alone.
Metallica - Death Magnetic: Happy, yet shocked to report that Death Magnetic is, while far from their finest work, is an above average effort and nowhere near the embarassment that was St. Anger. Imagine modern Metallica effectively melding with Puppets era Metallica.
Young Widows - Old Wounds: An excellent follow-up to Settle Down City, Old Wounds is the moment where Young Widows comes into their own. Reccommended. Download two tracks from Old Wounds here.
Jesu - Why Are We Not Perfect?: Possibly the most serene and pensive Jesu release, washes of distortion are traded for more and more melody. Between this and the recent split with Battle Of Mice, it'll be interesting to see what direction Broadrick takes Jesu.
Narrows - 7": A very interesting taste of what's to come from this experimental post-hardcore supergroup of sorts. And I LOVE the ending of "Life Vests Float, Kids Don't" (download it here). Can't wait for the LP
Bitter End - 7": Simple, brutal, and fun modern hardcore with a successful tip of the hat to the forefathers.

NEWS BLAST (BEATS)
- The Haunted will stream their new album Versus for one week starting Sept 12, 2008.
- Nifelheim added a west coast date in LA on OCt 26th as part of the Appease The Beast 2 Festival.
- Randy of Lamb of God joined Children of Bodom on stage in Norfolk. The band is currently on tour with Between The Buried And Me, including a single show at Hammerstein with Testament. (Tickets here)
- Suicidal Tendencies are embarking on a US Tour, including a date at Irving Plaza in NYC on Dec 4th. Ticket info is forthcoming.
- Meshuggah dropped in to visit with Bruce Dickinson at his radio show.
- Intronaut are currently filming a video with Sera Timms, director of videos by Isis and Pelican.
- Relapse records signed Obscura.
- Most Precious Blood have offered an update on their new album.
- Architect is currently booking a North American tour. If you want 'em in your city, holla atcho boy.
- Metal Underground interviewed Scott Kelly (Neurosis).
- Fear Before The March of Flames is now just plain Fear Before, not that you have been paying attention.
- The Dillinger Escape Plan founder/guitarist Ben Weinman sat down to discuss dropping off the Suicide Silence tour, the current drummer sitch and the new album. Download it here.
- Ivar Bjørnson on Enslaved sat down for an interview with Metal Experience.
- Deathcycle have announced a show at Cake Shop on November 15th with Mind Eraser.
- Steve Austin of Today Is The Day announced that his label, Supernova Records, will not release CDs- only vinyl and digital formats.
- Travis Ryan of Cattle Decapitation was interviewed by Vile Noise.
- Vader have confirmed that they have split with Mauser and Daray.
- The reunited Earth Crisis have signed a deal with Century Media.
- Rat from Discharge was recently interviewed by his myspace page keeper.
- Metal Injection went record shopping with Municipal Waste.
- Leng Tch'e scheduled a Canadian tour with Krisiun, and Paroxysm. Leng Tch'e recently replaced their lead singer while Krisiun recently dropped Southern Storm
- Check out a video interview with Dismember here and here.