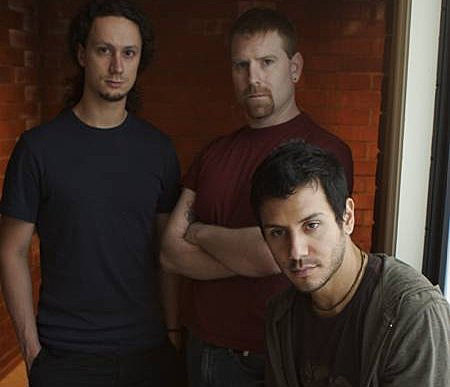 We kick things off with the reunited prog-death of Cynic and their new record, Traced In Air, due on Season of Mist on Oct 28th. Traced In Air is Cynic's first album in 15 years, since the release of the now cult classic Focus. Comprised of founders Paul Masvidal and Sean Reinert, both members of the legendary Human-era Death members, "Integral Birth" (downloadable above) is the first song to emerge from Traced In Air. Metalkult has posted a pretty extensive interview with Paul of Cynic.

Darkthrone have posted a new song from their upcoming album Dark Thrones and Black Flags, due Oct 20th on Peaceville. The record will be released on three formats: a regular edition in jewel case, a vinyl edition, and a special edition in a slipcased jewel case package with exclusive new video footage. Check out "Hiking Metal Punks" available for download above and head on over to their mini-site to stream two others!

Keelhaul have announced a handful of midwest & southern dates, though no NYC dates so far. The band is currently working on new material for a new record, the follow up to 2006's massive Subject To Change Without Notice, "and quite possibly a dvd". No word as to the details of when that record would emerge but when pressed, the band offered that they "are old & slow". 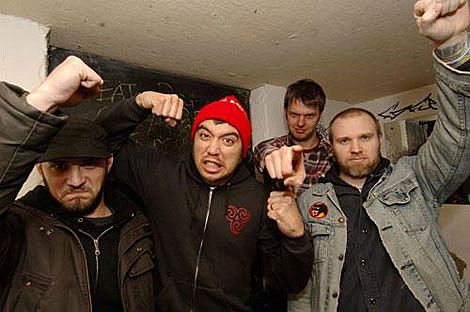 Doomriders & Disfear will team up for a split seven-inch available via Deathwish Records. A "Tour Edition" of the split will be available from the bands during their upcoming European tour with SSS, but the rest of us will have to wait for the preorder. Doomriders have a new album due next year.

As we discussed before, Neurosis is curating the "Beyond The Pale" event at Roadburn 2009, and last week they announced four of those bands... The Young Gods, Guapo, Akimbo, and US Christmas.

The Roadburn Flyer, Brutal Truth, The Gates Of Slumber, Gojira, YOB, and more as The Week In Metal continues.... Brutal Truth are currently grinding their way toward their new album, set for a 2009 release. So far, the band has 24 new songs ready to roll but in the meantime, look for Relapse to reissue For Drug Crazed Grindfreaks Only, their live mini-album recorded in 1997. Brutal Truth recently released material on the Relapse grindcore compilation, This Comp Kills Fascists. Speaking of that grind comp, contributors and all-around New York badasses ASRA have called it quits. Frown.

The Gates Of Slumber are hitting the road on The Conquest Of Poverty tour with Indiana neighbors Demiricous, including a single date at Lit Lounge on Dec 1! The band released the awesome Conqueror earlier this year. Members of both The Gates of Slumber and Demiricous are serving as members of Christ Beheaded.

Valient Thorr have announced In Heat, a DVD due November 4th that documents their career up until now including shows with Motorhead and The Sword, as well as recording Immortalizer with Jack Endino. Pre-order it here and get free downloadable live tracks from the DVD.

Birushanah are hitting the road in Europe in November. Tour dates are below. In the meantime, us east-coasters can look forward to a Birushanah/Drain the Sky split LP due soon. Details are forthcoming.

Iann Robinson interviewed Thou. The band will be at the Knitting Factory in NYC on Oct 15th with Tony Conrad and sunn o))). Tickets are still available.

Kreator have announced a US tour! Tour dates are below (including one at Nokia on 4/8, ticket info forthcoming) and will include thrash titans Exodus as well as Belphegor, Warbringer, and Epicurean! Kreator will drop their new album sometime next year. In other Exodus news, look for the band to perform their classic album Bonded By Blood in it's entirety in Seattle, Washington on November 12th at El Corazon.

An Interview with Genghis Tron

Aidan Baker (of Nadja) and Tim Hecker will drop Fantasma Parastasie via Alien8 on Oct 14th. The entire album is available for streaming here and pick up your copy of the CD or limited-to-500 white LP at Alien 8. Aidan Baker will be in town with Nadja on Halloween as part of the monthly UNsound party at Fontanas.

The Black Dahlia Murder, Soilent Green & Misery Index are teaming up for a short three week tour in December. Tour dates are below. The Black Dahlia Murder will be at the Hammerstein on Oct 9th with Children of Bodom, Testament, and Between The Buried and Me (tickets are still available). The next day, Testament will meet up with Soilent Green for a date in Hartford.

Brujeria, which is currently NOT Dino Cazares but does include Jeff Walker of Carcass and Shane Embury of Napalm Death, is hitting the road for a few texas dates and an LA date. Full tour dates are below.

General Surgery are currently at work recording a new twenty-track LP! The band has posted some progress reports here, here and here and hopes to finish the recording by mid-November" for a release in "February/March 2009".

Architect have posted a new track, "Uninventing The Wheel", from their upcoming album Ghost Of The Saltwater Machines due on Nov 25th via Metal Blade. The band is celebrating with an east coast tour in late November and early December, right before they play a handful of shows with the recently reunited Overcast (with Brian Fair of Shadows Fall) and The Red Chord. Check out "Death & Taxes (Rough Mix)" from Ghost... above.

PUNISHMENT DUE:
Particularly slow release week, but next week DEFINITELY makes up for it. Check out the following recco'd releases from this week...
Earthless - Live At Roadburn
Grails - Doomsdayer's Holiday
sunn o))) - Dømkirke
These Arms Are Snakes - Tail Swallower & Dove

NEWS BLAST (BEATS):
- Mike Patton has collaborated with Serj Tankanian for a song on the soundtrack to the new Leonardo diCaprio film Body Of Lies.
- Priestess is currently recording tracks with Dave Schiffman for their follow-up to 2006's Hello Master. Look for it in 2009.
- The Funeral Pyre & Early Graves have lined up a few dates on the west coast. Tour dates are below.
- Check out an audio interview with Glenn Danzig here. Danzig will be in NYC at Roseland on Oct 15th with Dimmu Borgir, Moonspell, Winds Of Plague, and Skeletonwitch. Tickets are still available. - Mournful Congregation was interviewed by mashnote.net.
- A six part video inteview with Tomas Haake of Meshuggah is viewable here.
- Andrew of The Endless Blockade sat down for a few words with The Sleeping Shaman.
- Under The Gun interviewed Giants and North. Check it out here.
- Cruz Del Sur will drop their first vinyl release, Be Gone by Pharoah. It will include a bonus 7" from with two songs from the Be Gone sessions.
- Relapse will drop Burst's Lazarus Bird on vinyl later this month.
- Download an audio interview with Johan Hegg of Amon Amarth here (loads iTunes).
- Nachtmystium's Demise will be re-released via Planet Metal with additional bonus tracks. Pick it up here.
- Kreation Records dropped a ton of new vinyl represses including classic records by Godflesh, Yob, Asunder, and Nachtmystium.
- Gnaw Their Tongues have released a new EP, For All The Slaves A Song Of False Hope, available now at Burning World Records.
- Behemoth will release a new EP, Ezkaton, on November 11th via Metal Blade. The EP will feature s single new track, Qadosh. Ezkaton will also be available as a limited edition box set that will include four picture disc seven-inches, a pendant, and the CD. Behemoth tour dates are below.