Lords... and they're angry! Typocracy) 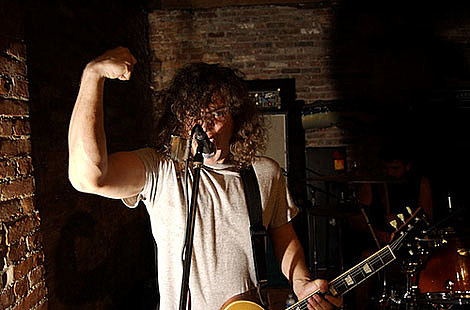 I bid you good day kind sir and m'lady! May I also say Fuck All Y'all Motherfuckers! That is definitely one album that I have had on blast all this week... the new record by spazzy Louisville hardcore freaks, Lords! Check out "Blasphemy Act" from Fuck All Y'all... currently streaming over at their myspace. Of course it isn't all gravy for dem Kentucky boys. Let's cut to the chase:

Matt Jaha will not be playing bass in the band anymore, and rather than cancel the upcoming tour Eric and I decided to do it as a two piece...I just get some more amps to make up for the bass...

Check out the long version for a tale that includes flailing fists, and flying guitar cabinets. The band is searching for a suitable replacement who must "be able to play the songs". Sounds reasonable. Best of luck, my dudes.

The mighty Anaal Nathrakh have finished writing their new album, the follow-up to the critically-lauded Hell is Empty, and All the Devils are Here from 2007! Mick Kenney is currently shaping the songs in the studio and hopes to have V.I.T.R.I.O.L.'s vocals done in February for an album release in June of 2009...

Deathwish has signed one of my favorite crusty European bands, Victims! Look for the band to re-release Killer on Deathwish later this year.

As we discussed earlier, Jarboe dropped Mahakali while Early Man dropped Beware The Circling Fin on The End Records. Want 'em both? Email BVCONTESTS@HOTMAIL.COM (subject: Early Jarboe) and win one of three sets of BOTH the Early Man EP on 10" vinyl and the Jarboe CD. Include your first and last name, winners will be contacted. Meanwhile, dig on Jarboe's "The House of Void" available for download above.

Whaaa? A surprise Saviours show at The Charleston?

Tickets for the previously mentioned Kreator tour that will swing through Nokia Theater on April 8th go on sale 11/01 at noon.

Watain LIVE from The Knitting Factory, Slayer, The Hellacopters, Genghis Tron, Cynic & The Sword, all as This Week In Metal continues....

Watain - "Sworn To The Dark" Live in NYC! Also check out "I Am The Earth" and "Storm Of The Antichrist"

Bad Brains added a show, and so did HR!

Slayer is set to play Reign In Blood in it's entirety on October 30 at the Hammersmith Apollo in London as a stop on "The Unholy Alliance: Chapter III" Tour with Mastodon & Trivium. The following night at the same venue, Slayer will perform their normal set for an upcoming DVD. Three weeks later, Slayer will again Reign for a second and third time on Nov 22nd in Gothenburg and Nov 23rd in Stockholm, Sweden. The band is currently in the studio recording material for a new album.

Glorior Belli have announced that they will enter the studio to record their new album Meet Us At The Southern Sign, due in 2009 on Candlelight!

Boris, Clouds & Growing are coming to the Music Hall Of Williamsburg! Tickets are on sale.

The Hellacopters (mems of Death Breath & Entombed) are calling it quits and will broadcast their last shows ever in a webcast that will stream in glorious high definition! The shows, which will take place two a day on Oct 25th & 26th at Debaser Medis in Stockholm, Sweden will be broadcast via myspace. 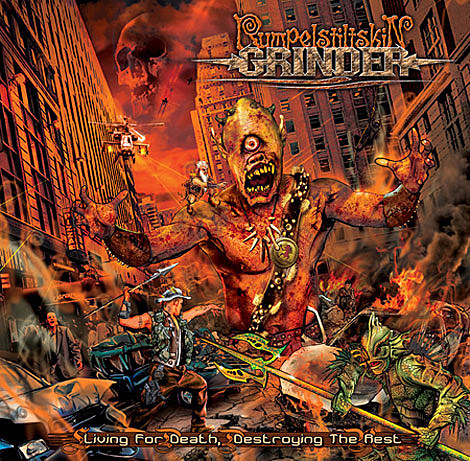 The Dwarves are coming!

Cynic's Traced In Air has been pushed back to November 25th in the US.

An (Awesome) Interview with Guy from The Red Chord

Hate Eternal and Misery Index will hit the road with See You Next Tuesday and Aeon to conquer Europe in early 2009. Following that, look for Misery Index & See You Next Tuesday to branch off and tour the UK and Ireland with Burning Skies and Dead Beyond Buried. Tour dates are below. Speaking of Burning Skies, the band cancelled a bunch of European shows due to the fact that "Singer Merv was attacked" and while "on the floor he had his leg twisted 180 degrees and repeatedly stamped on". Yikes. Merv "nearly lost his leg and he could take six months to recover". Get well soon.

Municipal Waste cancelled a few dates, including their Brooklyn date on 10/14.

More on Cynic, NEW records by Khanate and Darkthrone, YOB, Gojira, Keelhaul, Outlaw Order, and soo many others in the last Week In Metal, and the previous Week In Metal!

PUNISHMENT DUE:
BUSY release week, including a few recent faves... these are my picks for the week.
Lords - Fuck All Y'all Motherfuckers (HIGHLY Recco'd)
Gojira - The Way of All Flesh (This too)
Early Man - Beware The Circling Fin
Isis - Not in Rivers But In Drops (Single)
Jarboe - MahaKali
The Haunted - Versus
Tombs /Planks - Split 12"

NEWS BLAST (BEATS)
- Preorder for the previously mentioned Disfear / Doomriders split begins on Oct 24th at Deathwish Records.
- Cold World are taking a few months off to make way for a upcoming birth.
- Matt Fox of Shai Hulud was interviewed by Lambgoat.
- Check out badass John Joseph of the muthafuckin' Cro Mags with Fucked Up!
- MetalUnderground interviewed Michael IX Williams of Eyehategod.
- Extreme Noise Terror have announced that their new album, Law Of Retaliation, will be released on December 1st.
- Check out a two part interview with Ravn of 1349 here.
- Exodus is streaming "A Lesson in Violence" and "Metal Command" from Let There Be Blood, the re-recording of the classic Bonded By Blood due on Oct 28th.
- A Life Once Lost have lined up a few dates with Arsonists Get All The Girls and The Tony Danza Tapdance Extravaganza in November. Full details are below.
- Tony Iommi of Black Sabbath was interviewed by Guitar World.
- Brujeria is streaming a new demo here. The band is getting ready to tour of Texas.
- Mikael Akerfeldt of Opeth was interviewed by Sonic Excess.
- Jeff Walker of Carcass and Phil Anselmo was interviewed by Full Metal Racket in Australia. Listen to it here in Windows Media (forward to the 14 minute mark for Anselmo, 39 for Walker).
- Cradle of Filth have scheduled a tour with Satyricon that will take them to Nokia on Feb 27. Tickets are on sale.
- In the wake of the departure of Turmoil's lead singer Jon Gula, the band is looking for a new vocalist. In related Turmoil news, Aborted recently covered "Playing Dead" for Century Media's 20 Years of Extremes comp. Check that out here.
- Genghis Tron made a recent show in Hollywood (Oct 9th) available for streaming.
- Megadeth is currently working on a new album.
- Skeletonwitch completed a video for "Beyond The Permafrost".