Let's kick this thing off the RIGHT way, an absolutely BRUTAL grind record out NOW on Willowtip.... no, not the new Phobia (though that is good, and out NOW) or the new Maruta (also out NOW)... it's Cleptocracy by unstoppable force known as Kill The Client! Blazing through eighteen tracks of searing grindcore, Cleptocracy is both destructive and engaging.... Check out "Cleptocracy and "Divide And Conquer" downloadable above!

* The above Deathwish sampler features songs by Trap Them, Blacklisted, Cold World, Narrows, 108, United Nations, The Hope Conspiracy, Victims, Rot In Hell and many others.

Graf Orlock have announced details of their upcoming cinemagrind monstrosity, Destination Time Today, along with a new track streaming at their myspace! Look for the record to land on Level Plane (Date TBD) possibly around the time that Graf Orlock hits the East Coast for a tour that is (not fully) scheduled for Jan 2009! Check out the basic itinerary below, and hold tight for details to come.

Mastodon have anounced details for Crack The Skye, their upcoming album due in 2009! As discussed, Brendan O'Brien will be on the boards for the seven track (listing below), fifty minute opus which was was recorded at Southern Tracks Studios in Atlanta. Meanwhile, the band has announced a handful of European dates with Metallica (find 'em below). 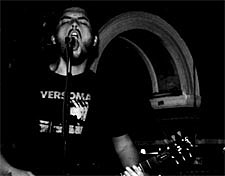 The sickening crusty hardcore of Planks are one my my latest obsessions, and their limited 12" (500 copies) is out NOW on Narshardaa. Pick it up here and check out "Deluge" from that LP, which the band has made available for download above and scoot on over to Aversionline, who has a second track for download! Also out now on Black Box, a split LP that Planks rocked with Tombs... a taste of which is above in the form of "A Sunken City". Speaking of Tombs, the band permenantly added Andrew Hernandez (ex-ASRA badass) on drums, and I must say that he absolutely KILLED it when I saw them lay waste to the Relapse showcase during CMJ.

Black Elk's Always A Six Never A Nine is available NOW over at Crucial Blast. Check out THREE songs from the record available for download above!

Cattle Decapitation have posted a new song from and announced a date for (Jan 20th, 2009- INAUGURATION DAY!) their new album, The Harvest Floor! Produced by Billy Anderson, The Harvest Floor will include contributions by Ross Sewage (Impaled/Ludicra), Dino Sommese (Dystopia/Asunder), Jarboe (Swans), Jackie Perez Gratz (Grayceon/Amber Asylum), and John Wiese. Check out the album cover below.... 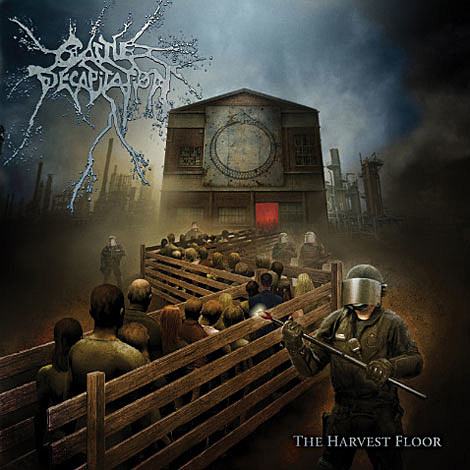 The reunited YOB have scheduled a show in Portland, OR at Ash Street Saloon on 12/13. NYC is next (not really, but here's to positive thinking)!

Flower Travellin' Band have scheduled a pair of shows at The Knitting Factory.

Justin Broadrick (Jesu, Final, Godflesh) has dropped a new Final LP, Afar, for purchase via digital download and limited-to-500 picture disc. Pick it up here. Broadrick describes the new Final as "8 new untitled pieces of processed loop manipulation via numerous sources, but the guitar is not one of them." 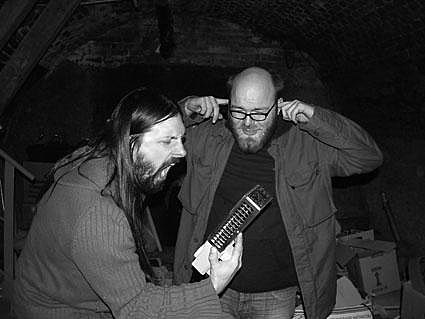 Beehoover will drop their latest record, Heavy Zooo, on Exile On Mainstream Records on Nov 18th. Created from the rhythm section of Voodooshock, this duo is a bass/drums combo, but don't think Om, think more along the lines of a more angular and doomy Big Business or Melvins... and Heavy Zooo is a killer. "Dance Like A Volcano" from Heavy Zooo downloadable above!

Kowloon Walled City have dropped their Turk City EP on 10" vinyl and CD. Pick it up here.... highly reccommended. Don't believe me? Try it on for size... it's downloadable for FREE above. Support the band and pick up a copy or a shirt!

Goes Cube dropped the Not What We Thought EP, available exclusively through the band and at their shows. Check out their full tour dates below.

Down's new video for "N.O.D." is below. Also, check out the band performing the classic "Bury Me In Smoke" Live in Glendale, AZ here, and an interview with Rex Brown and Jimmy Bower here.

Bloodhorse have posted a studio journal documenting the making of their new album, Horizoner. Look for it to touchdown in early 2009 on Translation Loss.

Six Feet Under are streaming a new song, "Seed Of Filth" from their upcoming LP Death Rituals due on Nov 11th.

New Years Eve in San Francisco this year means another spectacular heavy music show (last year it was Neurosis & Earth), and this time it's Fantomas performing all of The Director's Cut along with Tipsy and Zach Hill. Ticket info is coming soon, for all y'all left coasters. Fantomas is also playing all of The Director's Cut at the Mike Patton / Melvins curated ATP's Nightmare Before Christmas.

Check out a NEW Slayer track, "Psychopathy Red", streaming below! The band spent a few weeks this summer recording three new songs from their forthcoming LP, due summer 2009, but you can check out video of them recording here.

Vreid played the Brooklyn Vegan Day Party on Oct 25th and so did Made Out Of Babies.

These Arms Are Snakes, Narrows, and Trap Them have lined up a few west coast dates. Full details, including all of Trap Them's dates are below. Trap Them recently played the Brooklyn Vegan Day Show during CMJ.

Speaking of shows Trap Them are playing, Maryland Deathfest announced more bands for the 2009 festival including Bolt Thrower!

Dysthyhmia have scheduled a handful of tour dates in early February with Tombs, including a date at Union Pool on February 4th. Full tour dates are below.

Javelina have sheduled a handful of shows including one at Public Assembly on Dec 7th as part of Brandon Stosuy's (Stereogum/Pitchfork) Show No Mercy monthly series. Also on that 12/7 bill, Velnias, Bloody Panda, Malkuth, and a "very special guest". Speaking of Show No Mercy, this month's episode is here.

The Sword's video for "How Heavy This Axe"

Crustcake has pointed out that The Meat Wallet in Brooklyn will host a screening of Such Hawks Such Hounds, a film documenting heavy music and psych with appearances by members of Kyuss, Pentagram, Sleep, The Obsessed, Saint Vitus, Comets On Fire and many many more. After the early screening (5 PM), stick around for performances by Queen Elephantine, Naam, Crooked Hook, Weird Owl, and The Brooklyn Street Raga Association.

Metalsucks sat down with Steve Austin of Today Is The Day for an extensive interview. TITD is at The Knitting Factory on 11/5 with Weedeater and Wetnurse (tix here). TITD just released a video for "IED"... check it out below.

Behemoth are streaming a new song, "Quadosh", from the Ezkaton EP due on Nov 11th via Metal Blade. In addition, check out the video for "Inner Sanctum" from The Apostasy here.

Gorgoroth's Gaahl came out of the closet to Rock Hard Magazine! No, not THAT Rock Hard, you pervert.... it's a music magazine. Check out a translation of the article here.

Outlaw Order (mems Eyehategod, Soilent Green, Hawgjaw) have pushed the release date for their debut album, Dragging Down the Enforcer, to November 25th.

More on Lords, YOB, Keelhaul, Gojira, Obituary, Victims, and soo many others in the last Week In Metal, and the previous Week In Metal!

NEWS BLAST (BEATS)
- Despised Icon is poised to drop their first DVD, Montreal Assault Live, on January 27 via Century Media. It'll include video from their sold-out hometown show, alongside a new hour-long documentary and all of the band's promotional video clips.
- Rob Halford of Judas Priest was interviewed by CHOM-FM in Canada and by UGO.
- Christ Inversion, featuring Phil Anselmo, dropped their long-discussed debut album on Housecore Records.
- Italian badasses Bulldozer have reunited and signed with Scarlet Records. Look for their new album, Unexpected Fate, in April 2009.
- Season of Mist has announced they will reissue Pentagram's Review Your Choices and Sub Basement on January 27, 2009.
- Gnaw Their Tongues dropped The Genocidal Deliverance 7" get it through At War With False Noise
- Aaron Stainthorpe of My Dying Bride was interviewed by Beyond The Dark Horizon.
- If you are interested (I am only midly so), Jane's Addiction reunited AGAIN, but this time with estranged bassist/badass Eric Avery (that's more like it). Some details/video is available here.
- Head on over to Fuse on Demand on your cable box for an interview with Soilent Green. For more details, click here.
- Rehearsal photos of Vader's new lineup are viewable here.
- Glenn Danzig was interviewed by the Riverfront Times about his upcoming book of lyrics here. Danzig also did an interview with Indie 103.1 which is streamable here.
- Check out a video interview with The Acacia Strain here.
- Thou's Peasant LP is out vinyl at Level Plane.
- The Haunted dropped an exclusive non-album track "Walk On Water" from Versus on iTunes.
- Opeth have a few new interviews, including a video interview, an interview with Metal Hammer, and one with Metalsucks.
- Check out Benediction live footage here and here, as well as a video interview here.
- Check out a review of the opening date of AC/DC's Black Ice tour here. Setlist from the show is down below.
- Ryan Adams loves him some Xasthur and Saviours.
- The Thursday / Envy Split is streaming in it's entirety.
- Zoroaster love the cops?
- Daath posted a new song, "Sharpen The Blades" from their upcoming album The Concealers.
- Stream an ENTIRE Origin show from Rochester, NY here.
- Skeletonwitch have announced a new bassist, Evan Linger, taking the place of Eric Harris.
- The King of Metal, comedian Dave Hill, schools a bunch of Testament fans!
- Glorior Belli posted two live clips to their myspace.
- Check out some live footage of Voivod performing "Voivod" on September 20 in Japan here.
- Napalm Death have scheduled a few new European dates. Check 'em out below.
- The Hellacopters, who are no more, sat down for a video interview.
- Fuck the Facts have announced a few more new Canadian tour dates. Details are below.
- Metallica Death Magnetic has gone platinum. Hooray. Still here? Metallica's tour kick off in Glendale, AZ was reviewed by Rolling Stone and you can check out video of Metallica ripping through "Fight Fire with Fire" live in Glendale, AZ with soundboard audio.
- Total Fucking Destruction is streaming a new song entitled "Let The Children Name Themselves" from the upcoming Peace, Love, And Total Fucking Destruction.
- Ben Weinman of The Dillinger Escape Plan recently played a show at The Stone, cameras were there.
- Roadburn Records will drop the new Wolves In The Throne Room LP Live at Roadburn 2008 and Atomic Bitchwax's 4 on vinyl.
- Pick up a copy of Grief's Come To Grief on 2LP at Throne Records. The band is touring Europe with Trap Them.
- Check out an interview with Joe Duplantier of Gojira by Domination here.
- Ihsahn (Emperor) was interviewed by sevenstring.org.
- Light Yourself On Fire has been logging a tour diary over at Deciblog. Check out all five parts here.
- Enslaved have announced some tour dates.

CATTLE DECAPITATION - The Harvest Floor Track Listing:
1. The Gardeners of Eden
2. A Body Farm
3. We are Horrible People
4. Tooth Enamel & Concrete
5. The Ripe Beneath the Rind
6. The Product Alive
7. In Axetasy
8. Into the Public Bath
9. The Harvest Floor
10. Regret & the Grave