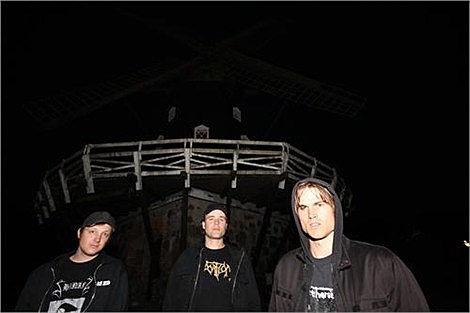 Let us all give thanks to Crowpath. For it is on November 25th, that the Swedes will brutalize us at the highly chaotic crossroads of brutal grind, death, doom, and hardcore with their new album One with Filth. The eleven-track LP One With Filth is currently up for preorder with a shirt at Willowtip Records, but you can download THREE of those tracks above, including "The Deed" available only here!

As we discussed last week, the mighty Graf Orlock have a new record on the way, Destination Time Today. The third installment in their cinemagrind trilogy, da Graf have been (un)kind enough to hook us BV'ers up with the new jam "Run Over By A Truck", downloadable above!

Ocean (of Maine) drops their new record, the two-track Pantheon Of The Lesser on Important Records on 11/11... check out the pair of MP3 excerpts available for download above. Likey? Pick it up right cheah...

Trap Them's massive new album Seizures In Barren Praise and the domestic issue of Carpathian's Isolation is out NOW via Deathwish Records. Broke/cheap & want 'em both? Email BVCONTESTS@HOTMAIL.COM (subject: Trap Them) and win BOTH CDs or BOTH LPs! Include your first and last name, your preference in format (CD or LP)... winners will be selected at random and contacted. Meanwhile, get your listen on at Hardcore Night's Trap Them Listening Party "and Beer Chugging Contest" (awesome) at The Charleston on 11/13.. flyer is below. Trap Them also was interviewed by Crustcake and sat in at WNYU! Download it here (forward to the 27 min mark).

Neurosis have announced a few new new bands for the Beyond The Pale event at Roadburn 2009 including Om, Six Organs Of Admitttance, Skullflower, and A Storm Of Light! Hmmm, Wino is at Roadburn with Saint Vitus, Scott Kelly of Neurosis is obviously there, and now Al Cisneros from Om is on board.... thats 3/4 of Shrinebuilder... we'll keep you posted for new additions as come up! As originally discussed in February, Scott "Wino" Weinrich has a new solo album in the works... but now it has a name and a date! Look for the new album, Punctuated Equilibrium on Jan 20th 2009, and check out the album art!

That album art plus details on the Amenra US tour, news on Mastodon, Jesu, Metallica, Giant Squid, Agoraphobic Nosebleed and so much more below... 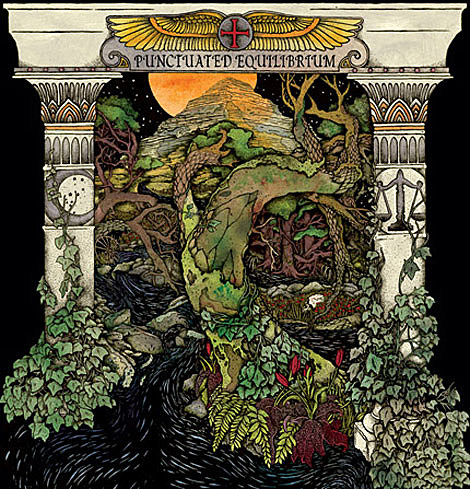 Mastodon have discussed the concepts behind Crack The Skye with The Quietus. The band also chronicled their Halloween with Pitchfork.tv and are dropping a 9LP Box Set limited to 1000 copies. The band is temporarily a trio.

Kreator have dropped more news on their upcoming album, Hordes Of Chaos, and have filmed a video for the title track. The new album will be available in multiple versions, including a deluxe version with an additional bonus DVD detailing the making of Hordes of Chaos. Meanwhile, you can pick up tickets here for their previously announced show at Nokia with Exodus, Belphegor, Warbringer, and Epicurean.

Amenra have announced an east coast tour in February 2009, including TWO dates in NYC! Full tour dates are below, but the band will hit Stolen Sleeves (538 Johnson) on 2/15 and ABC No Rio with Starkweather and Romans on 2/28! Meanwhile, pickup a repressing of Amenra's Mass II (limited to 500) and look for a vinyl version of Mass IIII at Hypertension Records.

Giant Squid have are streaming a new track from their upcoming album The Ichthyologist. Dig on "Blue Linkcia" at their myspace, and dig on the tracklisting below. 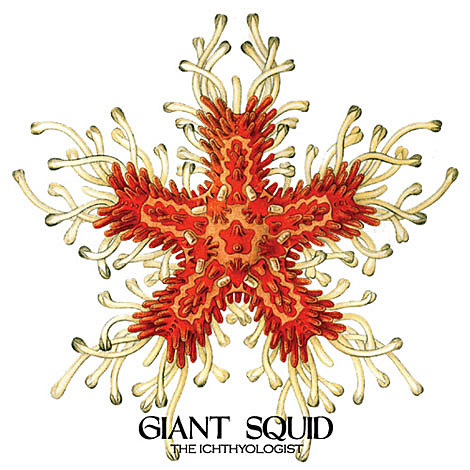 Made Out of Babies added a show at Europa on Nov 20th.

KTL (aka Stephen O'Malley and Peter Rehrberg) are releasing a new record, KTL IV, due in mid-Dec... pre-order it here.

ABC No Rio has alot of great matinees in the coming weeks... First up, Disassociate will headline a show with Defeatist, Traic, and Chainsaw To The Face this Saturday (Nov 15). The following week (Nov 22nd), look for Appalachian Terror Unit, Guided Cradle, Oiltanker, and Vulcan (ATU also plays the day before with Disassociate at Stolen Sleeves). On Nov 29th, Look for Deathcycle to hit the stage with Two Man Advantage, Investigative Reports, Vermefüg, and Dawn of Humans.

If you missed 'em, check out pics of Bison BC as well as Harvey Milk from Beats Of The East fest.

Robotic Empire snagged a few copies of the Jesu / Envy split in white... snag that here OR pick it up in silver via Avalanche. Envy's split with Thursday is out NOW at Temporary Residence, pick that up at and stream the whole thing here.

Agoraphobic Nosebleed and the now defunct Insect Warfare released a split 5" available here. ANb is currently working on a pummeling LP due in 2009.

Lamb of God have announced the title of their new record, Wrath, which is due on Feb 24th 2009 via Epic.

Down - "Temptation's Wings" LIVE in Seattle, WA, 10/30/08. Check out the band performing "Lifer" here. The band is currently working on new material.

Decibel Magazine has honored Metallica's ...And Justice For All as their current issue's "Hall of Fame" receipient. As you may know, this entails a detailed look at the making of the album, including a discussion on why Jason Newsted's bass is pretty much non-existent from the final mix. If you are a fan of Metallica or the record... highly reccommended. Speaking of Justice, check out the band performing "One" live on 11/1/08.

Russian Circles and These Arms are Snakes are teaming up for a limited-to-1000 (500 for the US, 500 for the rest of the globe) 12" via Sargent House to be released on Nov 15th here. Russian Circles contributes one track, "Philios", while TAAS contribute a pair, "Camera Shy" and "Trix". 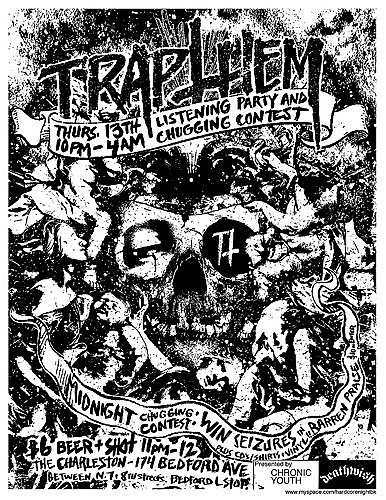 Rochester tech-nerds Psyopus have announced Odd Senses, their new album due in Feb 2009 via Metal Blade records. The band is currently streaming a new song, "The Burning Halo" at their myspace. In addition, scoot on over to Metalinjection.net to check out the band performing "The Burning Halo", as well as another new song, "Medusa", from their appearance at CMJ with Tombs and Bison BC.

Mick Kenney (Anaal Nathrakh) is currently scouring the earth for new musicians to round out a live line-up of his new project Deliverance. Interested parties can contact the band via their myspace page.... and while you're there, peep the six demos that the band are streaming! In related news, Benediction (with Dave Hunt of Anaal Nathrakh) will hit the studio in January 2009 to record their follow-up to Killing Music.

Cult Of Luna have scheduled a short tour of Australia, and word is, they are planning a US tour in the spring as well. Australian tour dates are below, we'll keep you posted on US dates.

Thundering southern doomers Zoroaster have announced completion of Voice Of Saturn, with a tenative release date of February 2009. 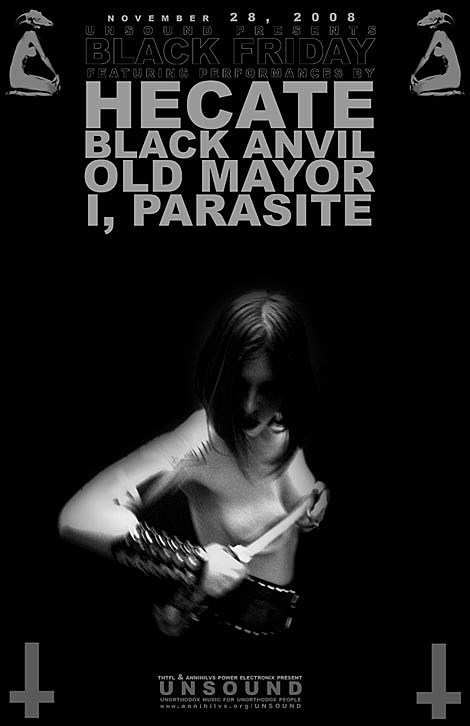 As discussed, Kylesa are playing a few dates with Amebix. In addition, the band have also made "Set The Controls for the Heart of the Sun" and a remix of "Between Silence and Sound" available for download. Kylesa recently covered a song by former Pink Floyd member Syd Barrett for a tribute album.

Don Caballero are playing the NYC area four times before the New Year, including once with Tombs.

Nachtmystium are headlining Show No Mercy at Public Assembly on Dec 7th.

More on Planks, Watain, Victims, Slayer, Municipal Waste, and soo many others in the last Week In Metal, and the previous Week In Metal!

NEWS BLAST (BEATS):
- Lions Of Tsavo's Firelung is out NOW. Pick it up here.
- Mouthpiece will drop a discography on 1/20/09.
- Phobia is streaming a new track, "Life Seems To Kill", from their split with Extinction of Mankind. In related news, Gadget posted a new song, "Repentance" from their upcoming split with Phobia.
- Check out three video diaries from the Volcom tour (pics from Hammerstein here) with Motorhead, Valient Thorr, and Year Long Disaster available here, here, and here.
- The Endless Blockade sat down for an interview with a New Zealand zine.
- Italians The Secret are currently booking a US Tour for 2009. In August, the band announced they were working on demos for a follow-up to Disintoxication.
- Check out a two-part interview with Skeletonwitch here.
- Watain was interviewed by Metal til Death... part one is here, two is here.
- SMNnews interviewed Nick Woj of Cold World.
- UK thrashers Onslaught, who will perform at the Damnation Festival on Nov 22nd in Leeds, UK, will record their performance for release as a live album.
- Fuck The Facts will release Disgorge Mexico on vinyl "this winter" on Coptercrash Records.
- Opeth sat down for an interview with MetalInjection.net.
- Impaled were interviewed my Monday Magazine.