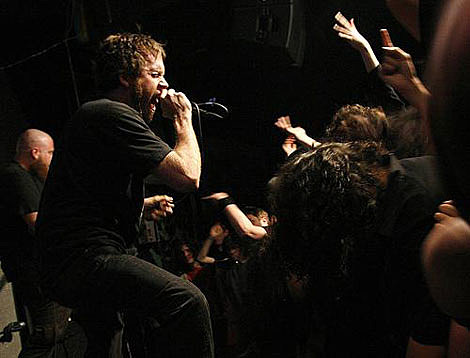 Cattle Decapitation have announced dates in support of their new record, The Harvest Floor due on 1/20/09. Supported by Psyopus, Book Of Black Earth, and Gigan, full tour dates are below, but no NYC just yet.

Adding insult on top of insult to injury, Maryland Death Fest have added powerviolence bad-asses Despise You (with Phil Vera of Crom), as well as grinders Pigsty. This is on top of Mayhem, Bolt Thrower, Enslaved and soooo many others... Unfortunately, Repulsion have cancelled their appearance.

Need a fix of fun, skull-splitting hardcore? Vitamin X have dropped their new record, Full Scale Assault on Tankcrimes and it is one awe-inspiring slab of lightning riffery and old-school hardcore punk produced by none other than Steve Albini at Electrical Audio Studios. Sporting ultra-suh-weeeet artwork by John Baizley of Baroness, the band has been kind enough to drop off a pair of MP3s from the record... check out "Deal With it" featuring John Brannon of Negative Approach and "You Suck" downloadable above and pick up the album here.

How many times has a headliner you dug dropped off a bill, and you were actually pleased with the results? In a bit of shuffling, Doomriders have dropped off their bill with Tombs at Union Pool on 12/20 (frown), BUT Bloodhorse (who are working on a new record), Keelhaul(!), and Acid Tiger (Ben from Cave-in, Converge) have been added! So Keelhaul in NYC, huh? Exciting, and it sounds like they have more than just the show on their agenda...

We are going to Brooklyn to record another cd with Andrew Schneider in December. Yee haw.-[Keelhaul myspace]

NOICE! Meanwhile, look for Tombs to play a show at Death By Audio on Dec 6th, play a few shows opening for Don Caballero at both Maxwell's and Europa, and embark on a short tour in the new year with Dysrhythmia. Full Keelhaul and Tombs dates are below.

Doomers My Dying Bride have revealed details of their new album, For Lies I Sire due in 2009 via Peaceville! Spanning nine tracks and recorded with producer Mags, vocalist Aaron Stainhorpe recently discussed the new record with Beyond The Dark Horizon. 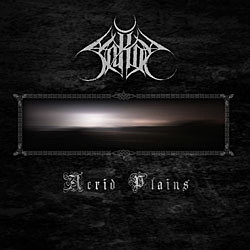 Saros, the Bay Area blackened prog metal band contructed from members of the almighty Weakling and Amber Asylum, will drop their new album Acrid Plains on Profound Lore 2/17/09. Album art is below and check out the new MP3, "Reversion" available for download above.

Mammoth Grinder are scheduled to rage through the tri-state in the new year. The trio will be in town on Jan 3rd to double up.. playing shows at ABC No Rio (matinee) AND The Charleston (night) in support of their long-player Rage & Ruin and No Results 7" due together on Assassinated Records. Alternating between thundering doom and crusty hardcore, check out heavily doom-oriented "God is Stuck in a Black Hole " from Rage & Ruin, downloadable above.

Gracial death-doomers Hooded Menace are responsible for the massive Fulfill The Curse on Razorback Records. It's out NOW and it's absolutely frightening.. highly reccomended for fans of Coffins and death-doom in particular. Check out the track "Grasp Of The Beastwoman" from Fulfill The Curse and pray for your own safety that these Finns never make it to the US... it'll be a massacre.

The Sword added a few more dates, including a night at Bowery Ballroom.

Conifer's Crown Fire dropped on Important Records... you can checkout three preview tracks that the label has provided here.

Satyricon have signed with Koch Records.

Orphan have lined up a few new dates, including a pair of local dates... at Union Pool on Dec 4 and at Santos Party House with Growing, Child Abuse, and Extreme Violence on Dec 22nd. (tickets here). 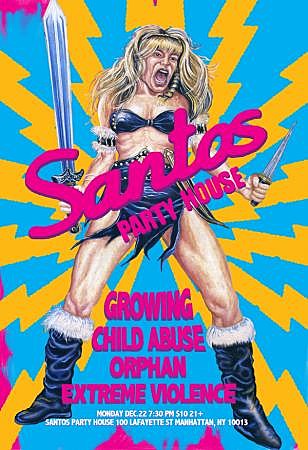 Metalkult have posted an interview with Watain as well as footage of Krallice at CMJ (photos here).

Pitchfork's Show No Mercy has dropped it's year-end list, with top tens from members of Torche, Enslaved, Ludicra, Krallice, The Endless Blockade and more... check it out here.

Terrorizer Magazine caught up with Dave Chandler of the reuniting Saint Vitus, Blabbermouth has the preview.

High On Fire have announced a few West Coast headlining dates, check 'em out below. Matt Pike of High On Fire's ex-bandmate Al Cisneros talked to us about the Sleep reunion.

If ya missed it, we profiled the mighty Gods & Queens.

Enslaved is shooting a video for "The Watcher" from their awesome new album Vertebrae. The band is currently touring Europe and announced US tour dates including a date at Gramercy on May 24th (currently on presale).

The Dillinger Escape Plan are currently wrapping up a DVD about the early days of the band up until the Calculating Infinity era. In addition, the band is working on new material which is due "soon", which they further qualify as in "DEP time"... meaning not really all that soon.

Pelican - "Lost In The Headlights"

Orange Goblin have announced that they will record their performance at Roadburn for a forthcoming limited-edition, vinyl-only live album.

More news on Graf Orlock, Crowpath, Kylesa, Neurosis, Nachtmystium, Kill The Client and more in the last edition of Week In Metal, and the one previous!

PUNISHMENT DUE:
Sloooow release week... look for a TON of releases next week, and pick up the new Hooded Menace (here) and the new Vitamin X (here)! Both are highly recco'd!

NEWS BLAST (BEATS)
- Burst have lined up a few Scandanavian dates with new Deathwish signees Victims and are looking to tour the US in 2009. Victims re-drops Killer on Deathwish later this year.
- Celtic Frost participated in a documentary on the band entitled "Celtic Frost - A Dying God" which aired on swiss TV. A trailer for the documentary is viewable here, hopefully we'll see it stateside.
- Bill Steer says that a new Carcass album is "a possiblity", according to an interview in Metalexiles.
- Opeth have added a few South American dates to their already gi-normous itinerary. Full itinerary details are below.
- Agalloch bassist Jason Walton has launched his own studio, Audio Savant.
- Steve Austin of Today Is The Day guest blogs for Metalsucks- Maynard James Keenan of Tool is planning a cabaret-style show at the Palms in Las Vegas, according to Blabbermouth.
- The Sword are readying a dual CD set, packaging their two LPS into a single disc available at their shows with Metallica.
- Black Cobra have announced a new seven-inch on At A Loss, for release on 12/9
- Genghis Tron have posted remix tracks and were interviewed by Metalsucks.

* w/DON CABALLERO
** w/ MADE OUT OF BABIES, A LIFE ONCE LOST
*** w/ KEELHAUL, ACID TIGER, BLOODHORSE