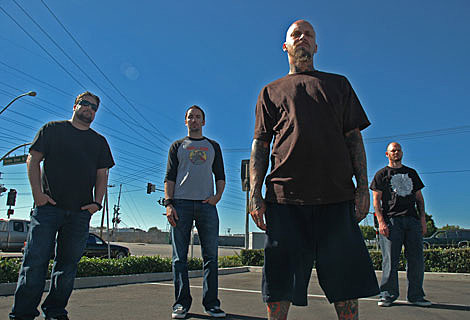 Downtrodden miscreants 16 have dropped off a new track, "Skin & Bones" from their upcoming Bridges To Burn due on Jan 20th via Relapse. Made of the Drop Out era lineup, 16 will tour their native west coast in the new year and ready reissues of Blaze Of Incompetence, Drop Out, Curves That Kick, and The Early Years, a collection of rare 7's and B-Sides. In other news, Ex-16 guitarist Phil Vera is scheduled to kick out the jams with powerviolence badasses Despise You at Maryland Deathfest.

The Dillinger Escape Plan have "loosely set aside" June and July 2009 to record their new album. In a myspace entry entitled "Blogzilla" (they ain't kiddin') the band also had this to say:

We're writing, ...recording with Steve Evetts, ...we've got Australia booked for late Feb/early March, and we'll more than likely be doing some stateside stuff as well around that time, maybe some US shows before we go down under, we'll see.

Impacting imminently, "astronaut metallers" Rosetta will headline Death By Audio in Brooklyn on Dec 6th with mighty Tombs, Junius, Moving Mountains, and Battilus. Wanna go? We have one pair of tickets to give away. Details on how to win at the very end of this post.

Tombs recently dropped off of the bill for the Don Cab show at Europa, but they are still on for Maxwell's AND have added a matinee at ABC No Rio on Feb 21, 2009 with Black Anvil and Woe. Meanwhile, Batillus will also be on hand to open Withered when they damn the stages of Europa on Dec 19th with Inswarm. Tickets are on sale. Withered was captured on video by Metalkult when they opened for the black metal horde Watain.

Napalm Death have revealed more details about their upcoming follow-up to the triumphant Smear Campaign. Time Waits For No Slave spans fourteen tracks, including the currently streaming "Diktat", look for it to drop on Century Media on Feb 10th with a cover that looks sorta like this. In the meantime, dig on the tracklisting way below and video of the band grinding their way through "Diktat" and "On The Brink Of Extinction" in the video below, shot on 11/22/08 in Leeds, UK. Barney from ND was recently interviewed by Rock Sound, and the band are scheduled to play the new record during a hometown show in Birmingham, UK on January 31st.

That video, Pelican, Integrity, A Storm Of Light, Coalesce, Demiricous and so much more, below...

Tickets are on sale for the previously mentioned Zoroaster / Amenra show which will be headlined by the recently announced A Storm of Light!

Juan Montoya is going to play with Torche one last time.

"The ATP / A Nightmare Before Christmas show on December 5, 2008, will be my final show with Torche. I'm very proud of the music we have created together over the past 4 years. I have been blessed to?tour the world and meet amazing people and will be seeing you all soon enough. I am very inspired and will be collaberating with many of the talented friends I have met in my travels. Look out for new material early next year and a tour to follow. I wish Torche all the best and I thank all the fans for listening and being a part of this amazing experience."

Juan may no longer be in Torche, but at least we can look forward to new material from the ex-foursome when the band drops a new 12" featuring a pair of new tracks in the new year via Hydra Head. We'll keep you posted as more details pop up.

Tickets are on sale for the previously announced Coliseum/Blacklisted slugfest on 2/27/09. Coliseum recently played Bowery with Baroness.

Nocturno Culto of Darkthrone announced that he and his bandmate Fenriz (who describes himself as "20% John McEnroe, 20% Jello Biafra, 20% Lemmy, 20% King Diamond, 20% Larry David - 100% maniac".. -note- thats 200%), will head back into the studio on Dec 13th to work on a new record! The body isnt even COLD on the new Darkthrone... Dark Thrones and Black Flags dropped in late October.

Enslaved have cancelled their North American tour, but plan to reschedule. Boo. While we wait for those new dates, check out their video for "The Watcher".

Medusa featuring members of Racebannon dropped off some exclusive MP3s.

Orange Goblin will hit the studio in may to record their follow-up to Healing Through Fire. Look for Sanford Parker to man the controls and look for the record to land in September of 2009 on Candlight! The band recently announced that they would record their Roadburn appearance for a limited vinyl-only live album.

Reign Supreme has been added to the previously announced Absolution show at the Knit on Dec 21st (tickets here).

Mayhem will release the original demo of De Mysteriis Dom Sathanas featuring the previously stripped bass tracks by convicted murderer Varg Vikernes (aka Burzum). Details are forthcoming, but look for it to appear on the limited (3,000-copy) Life Eternal digipak. A recent ebay auction of Mayhem's Deathcrush signed by the murdered Euronymous (by Vikernes) went for $1000. Speaking of high-priced bidding, the original art from Master of Puppets was sold at Christie's... for $35K!

Black metallers Vreid are streaming a new track, "Speak Goddamnitt", from their upcoming Milorg at their myspace. 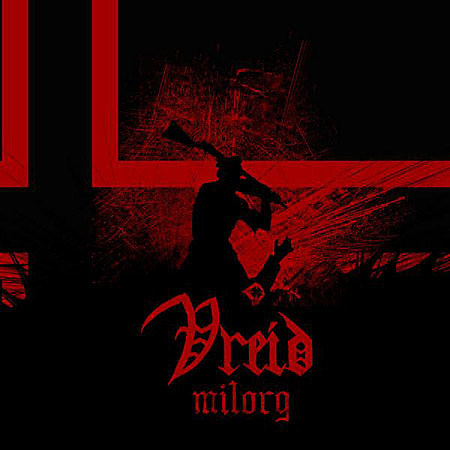 The Haunted have announced that they will tour the US in 2009 and that they will shoot a video for "Trenches" this month for premiere in early 2009. Full tour dates are below.

Throne Records will drop the new Monarch, Mer Morte, on Dec 12th in a limited edition vinyl pressing of 666 copies. That same day, Throne will also drop a vinyl pressing of Grief's Come To Grief. Both are available for pre-order. Look for the label to also drop Corrupted's Nadie EP, Grief's ...And Man Will Become The Hunted on 2LP and Cathedral's Endtyme on 2LP.

Old-school thrash badasses Kreator have posted "Warcurse" from the upcoming Hordes Of Chaos to their myspace page. Look for the record on January 13, 2009 and check out the band when they hit the road including a show at Nokia on 4/8/09! Look for a video for "Enemy Of God" in the coming weeks.... 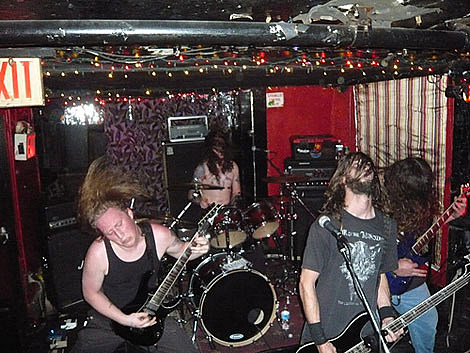 I got a chance to check out The Gates of Slumber this past week, and as expected, the band played a ripping doom set in the basement at Lit Lounge with the equally impressive Demiricous and young but promising doomers Batillus. . In related news, look for Iron Kodex to release The Gates Of Slumber's The Awakening and Suffer No Guilt on 2LP on Dec 19th, banding the pair together as a massive 4LP set entitled Chronicles of True Doom.

Early Man is currently working on a new LP, and blogging away about it in the meantime. Look for the band to hit the west coast with 3 Inches Of Blood and Toxic Holocaust (dates below).

Eric Rutan's brainchild, Hate Eternal, have dropped off their tour with Job For A Cowboy "due an infection in Erik Rutan's hand and complications in his kidney". In other bands-dropping-off-tours, All That Remains have dropped off the In Flames/Gojira tour.

Ehnahre and Psychic Paramount will join Pylon at the Knitting Factory on Dec 21st,

The uber-ridiculous Gorgoroth vs Gorgoroth dispute (two factions of the same band, both claiming rights to the name) will soon be settled in a Norwegian court. In other Gorgoroth news, the Infernus version welcomed ex-vocalist Pest.

Young Widows are currently taking pre-orders for their split 7" series with Pelican, Bonnie 'Prince' Billy, Melt-Banana, and an unnamed artist.

Municipal Waste are "almost finished writing a new... album which will hopefully be out mid to late summer".

German thrash vets Destruction will celebrate their 25th annum with a North American tour including THREE tri-state area dates! Look for Destruction, supported by Krisiun & Mantic Ritual, to hit the Crazy Donkey in Farmingdale, NY on Mar 5th, The Chance in Poughkeepsie on Mar 7th, and BB King's on April 7th. Tickets are on sale at Enterthevault.com until Dec 19th, followed by the normal ticketing venues. Destruction recently dropped their new album, D.E.V.O.L.U.T.I.O.N.

Southern Lord have signed a pair of guitar-drums duos in Black Cobra and Eagle Twin, with each hitting the studio in 2009 to record new albums for the label. Eagle Twin is probably best known as a project of Gentry Densley of Iceburn, and more recently, Ascend. Black Cobra was formed by ex-members of Cavity (which once included Steve Brooks and Juan Montoya of Torche), Acid King, and 16 and recently dropped the awesome Feather & Stone in 2007.

Rwake have been working on a few new songs and will debut them at some currently-unnannouced dates in the south in February 2009.

Integrity have added a show on Jan 9th, 2009 at The Sonar in Baltimore that is being billed as an "exclusive US performance". Pulling Teeth, who recently dropped a video for "Heretic" are on board as support. Look for Pulling Teeth to share a split with Irons, aka the Jacob Bannon/Dwid Hellion project. 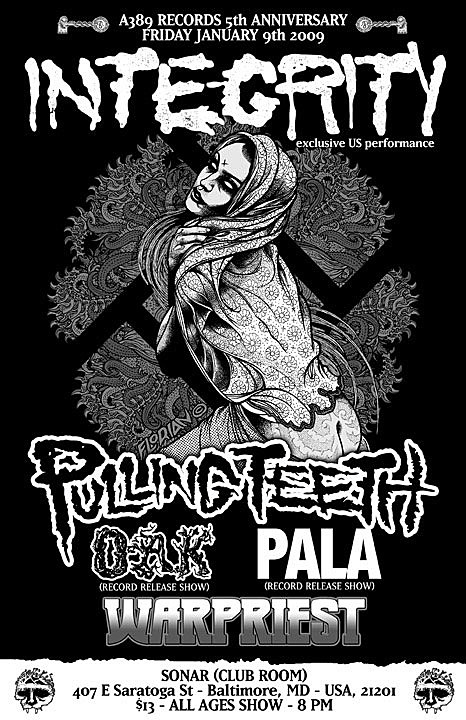 Wildildlife will re-release Peas Feast on Crucial Blast in the new year. Preorders are here.

Coalesce have completed recording their new record and are mixing in preparation for a 2009 release. This will be their first longplayer since 1999's 0:12 Revolution In Just Listening.

20 Buck Spin announced that the Bastard Noise/The Endless Blockade split will hit the shelves "at the earliest" in late spring, with the CD version sportin' some bonuses.

PUNISHMENT DUE:
Not too many releases this week, but last week saw a few great ones worth a look. Get out there and buy...
Architect - Ghost of the Saltwater Machines
Crowpath - One With Filth
Cynic - Traced In Air
Medusa - En Raga Sul

NEWS BLAST (BEATS)
- Bad Brains have added a few dates on their post-election victory lap, including their first dates in Hawaii! Tour dates are below.
- Hey Colossus! will drop a limited pic disc version of Happy Birthday via Riot Season. Pre-orders start here next week.
- Pestlience have announced European tour dates, but no NEW US ones (we know they'll be at Maryland Deathfest).
- H20 will open for Dropkick Murphys on tour in 2009, including Roseland on March 6th. Tickets go on sale on 12/5 at 10AM here.
- Possessed have scheduled a few west coast dates in 2009. No official word on Jeff Becerra's condition, although the new tour dates point to good things.
- Atavist is selling copies of their Nadja collabo record at their myspace.
- Metalkult is streaming video from a live set by Book Of Black Earth and an interview with Amon Amarth.
- The place that brought you the Neurosis burger, Kuma's in Chicago, is throwing their own festival with a pretty decent lineup including Samothrace, Indian, Plague Bringer, Yakuza, Deadbird, Battlefields, Lair Of The Minotaur, and many others. More details here.
- Thou are preparing to tour Europe in summer 2009 and the west coast in the spring.
- Candlemass have completed their new album, due in "early" 2009.
- The man behind many many many black metal logos, Christophe Szpajdel, sat down with Vice Magazine. Check out some of his sketches at his Flickr account.
- Brann Dailor of Mastodon was recently interviewed by Metalshrine.
- Nifelheim bassist Tyrant tears Metallica, Cliff Burton, Pantera, and Dimebag a new one.
- Heaven & Hell, or the Dio-fronted Black Sabbath, is working on a new album.
- Germany's Viva Hate Records will drop vinyl box sets from Opeth and Immortal. Opeth's 6LP set will compile The Orchid, Morningrise, and My Arms Your Hearse while Immortal's 6LP set will compile Diabolical Fullmoon, Pure Holocaust, Battles In The North, Blizzard Beasts, At The Heart Of Winter, and Damned In Black.
- Rumplestiltskin Grinder have posted a pair of new tracks from their upcoming Living For Death, Destroying The Rest (due 1/20/09), to their myspace.
- Kerrang is reporting that Faith No More is reuniting... I have my doubts.
- Fuck The Facts released a 19 copy EP, The Wreaking collecting seven-inch and live material.
- Paul Masvidal of Cynic was interviewed on Blabbermouth.

To win a pair of Rosetta tickets, email us at BVCONTESTS@HOTMAIL.COM (subject: ROSETTA). Include your first and last name. One winner will be picked at random and contacted.