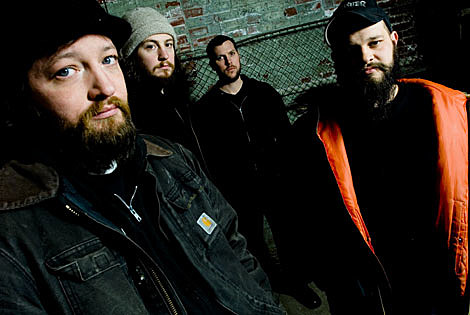 My favorite of the two Oceans, the one missing a definite article in front of their name (Ocean of Maine), will be the next heavy band to headline Show No Mercy at Public Assembly (Feb 15th). As part of some sort of bizarre doom-off, Ocean will try to out rumble and underpace the mighty Salome, Riff Cannon, and Batillus who are also on board for the (anti-) festivities. Both Ocean (profiled here) and Salome (who we profiled in August) released full-length LPs last year... Pantheon of The Lesser and S/T respectively. Riff Cannon will drop their debut LP in 2009 and Batillus recently made their new self-titled EP available for free download here.

Speaking of Salome, lead vocalist Kat will make her first Agoraphobic Nosebleedappearance on Agorapocalypse, the latest LP from Scott Hull's pummeling grindcore project. Due April 14th, Agorapocalypse won't be the lone AnB in 2009; the band plans a series of splits for this year with a wide array of bands including Despise You, ANS, Agents of Satan and Thrones!

Brutal Truth recently announced their involvement in the Auditory Assault Festival (with Gadget, Kill The Client, Jig-ai and others), and now comes word that the band will have released their new record before then! Enter Evolution Through Revolution, recorded at Watchman Studios by Doug White (Psyopus) and due on April 14th via Relapse. Stokeage. Brutal Truth drummer Richard Hoak will do double duty at the Auditory Assault festival, also playing with his Total Fucking Destruction project.

Isis announced their new album, Wavering Radiant, due on May 5th via Ipecac Records! Produced by Joe Baressi (Tool, Queens of The Stone Age), look for the wax to hit the streets on Apr. 21. Tool's Adam Jones contributed guitar tracks to a pair of songs on Wavering Radiant. 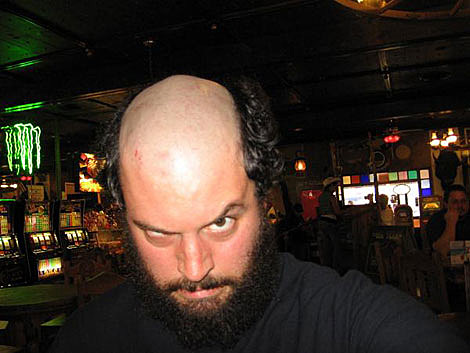 Big Business have announced their new album, Mind The Drift due in April via Hydra Head Records. Produced by Phil Ek (The Shins, Earth, Fleet Foxes, Built To Spill), the record is the first to feature new guitarist Toshi Kasai. Stream the new track "Gold and Final" at their myspace.

Ahhh... NOW I know why 1349 are heading out on tour.... Revelations Of The Black Flame is the name of the recently announced new album by the black metallers! Recorded at StudioStudio Nyhagen in Bøverbru, Norway, 1349 have enlisted Tom Gabriel Fischer to help man the boards! Look for it sometime this spring. Meanwhile, Tom Gabriel Fischer's new venture post-Celtic Frost, Triptykon, is currently in the demo phase. 1349 will be at BB Kings on March 2nd, tickets are available here.

The sickos in Sourvein have scheduled a few new dates, including an NYC date that looks to be part of an upcoming US tour. No details just yet, but set aside April 19th until then. Tour dates below.

The previously announced Converge show at Europa on March 27th (tickets here) just got a little bit nuttier with the addition of Genghis Tron, Ceremony, Rise and Fall, and Pulling Teeth.

Lair Of The Minotaur's new DVD, WAR METAL BATTLE MASTER is out NOW at Southern Lord. Meanwhile, bassist Nate Olp (Demiricous) has been sent in to replace the departed DJ Barraca for live gigs. DJ recently left LOTM to joined Harpoon, who's new record, Double Gnarly / Triple Suicide is due on Feb 10th via Interloper Records.

Cannibal Corpse, who will drop their new album Evisceration Plague via Metal Blade on Feb 3rd (tracklisting and art below), are currently working on a video for the title track, who's audio is streamable here. The band recently dropped the ridiculo-extensivo DVD Centuries of Torment: The First Twenty Years. Decibel called it their fave of 2008, and are hosting a video from the bonus disc of Evisceration Plague here. 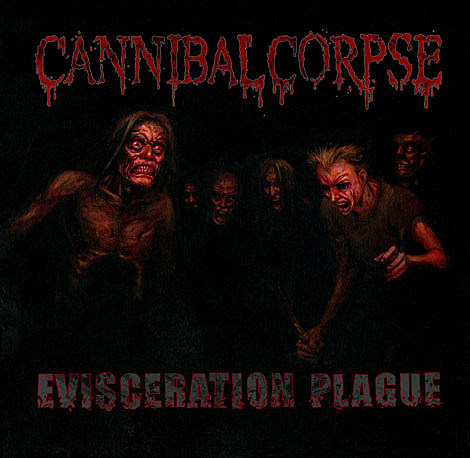 French black-metallers Blut Aus Nord will emerge from their coffins on Feb 23rd to deliver Memoria Vetusta II - Dialogue With The Stars to Candlelight Records! A sequel of sorts to their 1996 LP Memoria Vetusta, Blut Aus Nord are coming off the 2007 release of the massive Odinist.

Napalm Death is streaming their new record Time Waits For No Slave at their myspace. Make sure and pick it up when it drops on Feb 10th!

Suffocation announced that they are heading into the studio on Jan 31 with producer Joe Cincotta to record Blood Oath for their new label, Nuclear Blast. Look for it this "spring/summer" tenatively.

Wolfbrigade is currently taking orders for their new record, Comalive, at Deranged Records! This is album numero cinq for the crust-obsessed ex-members of Anti-Cimex, so scoot on over to Deranged Records to pick up the CD or preorder the LP due in February.
Wolfbrigade - "Ride For A Fall"
Wolfbrigade - Ride for a fall

Aura Noir and Sigh have been added to the ridicuous lineup at Maryland Deathfest.

The Guardian ran an interesting piece on blast beats... check it out here.

Sublime Cadaveric Decomposition are working on a new album which they hope to have out by Nov 2009 before "hitting the road again".

According to the guys at SMNNews, Weekend Nachos are working on a new album, their second full-length entitled Unforgivable due on Deep Six Records.

Coalesce, Pig Destroyer, Trash Talk, Septic Flesh, Evil Army, US Christmas, Gaylord, and Apocalyptic Visions have all been added to the Scion Rock Fest. In addition, Lambgoat has the scoop on how to get tickets starting 1/22 at 9PM EST.

Cult of Luna dropped a teaser for their upcoming DVD, check it out below. The band has lined up a slew of European tour dates, but no US dates so far... we'll keep ya posted (all dates below). Cult of Luna's Eternal Kingdom was one of my favorite records of 2008.

Priestess and The Devil's Blood will open the Pentagram show at Webster Hall on 3/6. Tickets are still available.

Braveyoung, aka the artists formerly known as Giant, announced that a new 10-inch (Bloom) and their LP follow up to Song will drop in 2009.

Carcass have announced a few more dates in March in Texas, Colorado and Anaheim. Suffocation & The Faceless are on board for a few of those dates(full tour sched below).

Cable, who thankfully reunited in 2008, have inked a deal with The End Records for an upcoming new album! Congrats dudes! Look for the band to enter Brooklyn's Studio G in March to record their new album with Joel Hamilton at the controls. Meanwhile, if you aren't up on you're Cable knowhow, tighten that shit up with the reissues by Translation Loss.

Roadburn has added Grails, Earth, Grey Daturas & Tribes of Neurot (aka Neurosis's ambient alter ego) to the Beyond The Pale Fest.

The law of diminishing returns is in full effect for Lamb of God, but that won't stop the band from hitting the road with As I Lay Dying (ick) and Children of Bodom (snore) with God Forbid (snooze) and Municipal Waste playing the opening slots along the way. Full tour dates are below including Roseland on May 8th (ticket info forthcoming)... you have been forewarned. "Set To Fail" from the new album, Wrath, is streaming here.

The Dillinger Escape Plan are playing The Studio @ Webster Hall!

Get ready to grind away at the Auditory Assault festival! 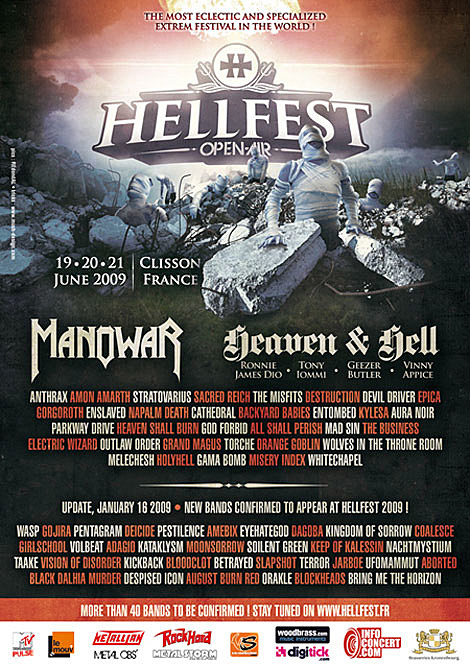 Wolves In The Throne Room, Shrinebuilder, Satyricon, Obscura, and so much more in the last installment of This Week In Metal!

PUNISHMENT DUE:
Three great releases this week... I recommend all of the following:
Cattle Decapitation - The Harvest Floor
-16- - Bridges To Burn
Wino - Punctuated Equilibrium

NEWS BLAST (BEATS):
- Year Of No Light have added Shiran of Monarch on guitar, as well as a second drummer, Mathieu from Aeroflot.
- No Friends, a new venture featuring members of Municipal Waste and New Mexican Disaster Squad, have posted three songs to their myspace.
- SSS's The Dividing Line is out NOW.
- Bloodbath have completed filming of a video for "Hades Rising" from their new record The Fathomless Mastery. Look for that soon.
- Most Precious Blood are working on completion of their new album, Do Not Resuscitate due this Spring on Trustkill.
- Check out an interview with Satyr of Satyricon here and Frost here. The band is currently touring North America on the heels of the release of The Age of Nero (download a track here), and will be at the Nokia on Feb 27th (tix here).