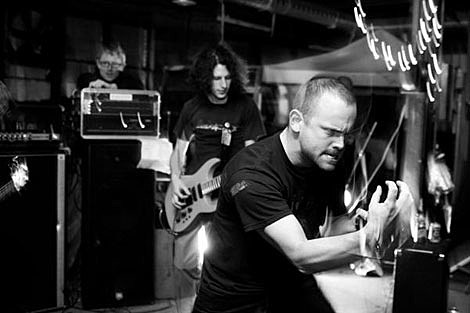 Welcome to this week in Metal! This week we'll start with the pedal to the floor with Harpoon of Chicago, who will release their new LP Double Gnarly / Triple Suicide on Interloper Records. Featuring members of 7000 Dying Rats, the band recorded the LP in August 2008 with Andy Nelson (Weekend Nachos), sending it off to metal-mastering go-to Scott Hull (Pig Destroyer, Agoraphobic Nosebleed) for the finishing touches. The trio takes advantage of the drum machine gun to create a relentless grind assault reminiscent of Plague Bringer, Agoraphobic Nosebleed, or Genghis Tron (sans keys). Check out "Frogs, Boils, Locusts..." available for download above, and cop it on limited LP (400 in black, 100 in white & blue marbled vinyl) when it drops on Feb 10th! Harpoon recently added bassist DJ Baracca (ex-Lair of The Minotaur) to their ranks and have added a few live dates in and around the Chi (dates below). 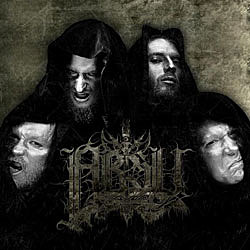 Absu have announced a new self-titled album, posting the ripping new track "Girra's Temple" to their myspace. Due on Feb 24th on Candlelight Records, the band have also lined up a few dates including SXSW on Mar 20th at Spiros and at... you guessed it... Maryland Deathfest. Meanwhile, Absu is garnering alot of media attention lately... check out features in Metal Maniacs, Terrorizer, and Zero Tolerance.

Hot off of the release of his first solo album Punctuated Equilibrium, Wino will play his first show with his solo band (featuring skinsman extraordinaire Jean-Paul Gaster of Clutch) at the 9:30 club in Washington, DC on Sat Feb 7th! Wino will be joined by King Giant and the mighty Salome, who will be in NYC with Ocean on Feb 15th. In related news, Clutch have released their first digital single "King Of Arizona" (iTunes users, buy it here), from the upcoming remastered Slow Hole to China, Rare & Unreleased. The band have lined up a few dates with their alter ego (most of 'em anyway), The Bakerton Group including Feb 27 at The Chance in Poughkeepsie and Feb 28 at The Crazy Donkey in Farmingdale. Full tour dates below.

As much theorized and finally realized, The Auditory Assault Festival will take place at Club Europa on May 16 & 17.

Complete Failure announced a short tour of the east coast and the midwest with Polish grinders Antigama including an NYC date at Europa on May 20th. Details are forthcoming, full tour dates are below. The Pittsburghers (CF) have posted a trio of demo tracks at their website, check them out above. Antigama is prepping for March 3rd, when Relapse will drop their new album Warning. 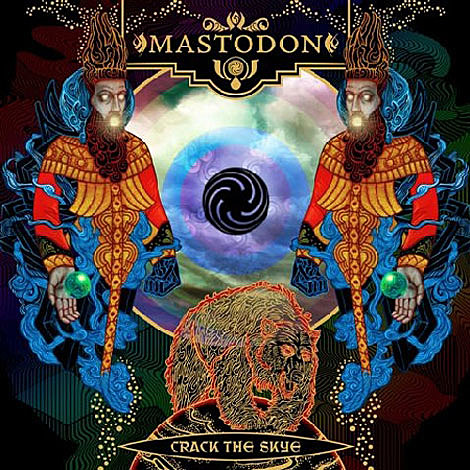 Mastodon is currently streaming "Divinations" from the upcoming Crack The Skye. Check it out kids... it's a burner! The single is also available for sale with a limited edition tee. Mastodon and Genghis Tron are playing the Coachella festival this year.

Napalm fucking Death will be in NYC in April!

Rise Above dropped the new album by Belgians Serpentcult, a doomy hybrid of Electric Wizard and High on Fire fronted by Michelle Nocon, a female with some SERIOUS pipes. The Weight of Light was produced by Billy Anderson (Sleep, Neurosis, Melvins) and the band is streaming three of those tracks at their myspace, with the title track available for download above. So far the band haven't added any North American dates, but if they do, we'll let you know (european tour dates below). Meanwhile, dig on an interview that Serpentcult did with Hellride Music here.

Coliseum have announced a slew of tourdates (below) as well as a new seven-inch entitled "True Quiet / Last Wave" on Deathwish! Full tour dates are below. Coliseum with join Converge, Genghis Tron (who was recently added), Ceremony, Pulling Teeth, and Rise & Fall at Europa on March 27th.

Blut Aus Nord have posted "The Formless Sphere (Beyond The Reason)" to their myspace page, the first new song from the upcoming Memoria Vetusta II - Dialogue With The Stars. Look for in Feb 23rd on Candlelight.

Valient Thorr have added a February 6th show at The Shank in Greenpoint (98 Bayard @ Leonard) with Acid Tiger, Golden Error, with Tournament. This show makes it TWO NYC dates.... don't forget about their upcoming show with Anthrax and a half pipe.

Minsk are currently working on their new album, Echoes In The Movement Of Stone, at Volume Studios with Sanford Parker (bass) at the helm. Look for it to impact in summer 2009 on Relapse. Meanwhile, the band have a few tour dates lined up, including Roadburn 2009. Full tour dates below.

Black-metal Parisians Glorior Belli posted a video teaser (below) for their upcoming Meet Us At The Southern Sign, to be released in 2009 on Candlelight. Here is the band in their own words:

"This new effort comprises of eleven tracks - every note of which adores and glorifies the name of Lucifer: Bringer of the Forbidden Light. Glorior Belli will impose itself upon the intoxicated scene of blinding and false prophets.

None shall prevent the flame from burning ever bright; none shall interfere with the wrath of the Beast!"

Battlefields & Irepress are teaming up for a lengthy North American tour including a stint at SXSW and a tenative NYC date of April 10th. Irepress's sophomore album, Sol Eye Sea I, is due February 17 via Translation Loss Records. Stream the new track "Cyette Phiur" here. Battlefields recently revealed the art for the upcoming Thresholds of Imbalance and are streaming a new track, "Quake & Flood".

Carcass are back, again! Although the band haven't added any new NYC dates, the band will hit up Philadelphia on 3/13... road trip! Intersecting with that tour in Fort Worth will be Suffocation, who are on a North American jaunt of their own with Whitechapel, Decrepit Birth, Veil Of Maya, and (on certain dates) Psycroptic. No NYC date though, just a single date on Long Island at the Crazy Donkey on March 11th. Full tour dates for all are below. 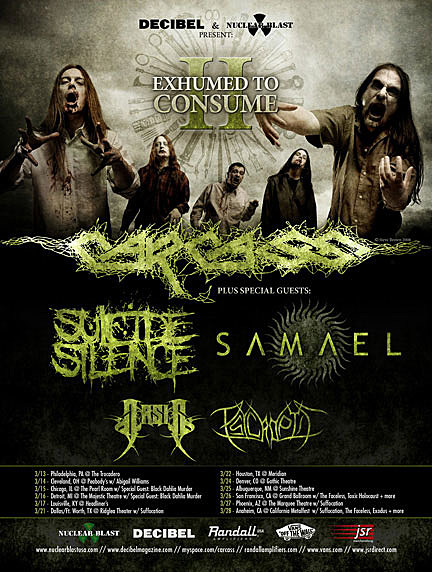 The Rockstar Energy Drink Mayhem Festival is back, and much like last year (save for Slayer, Behemoth, & Cannibal Corpse) it underwhelms and is not coming to NYC (Camden, NJ & Hartford,CT). The rest of the line-up is as follows: Marilyn Manson, Bullet For My Valentine, Job For A Cowboy, Behemoth, The Black Dahlia Murder, Whitechapel, Trivium, All That Remains & God Forbid. God Forbid is right. Slayer is also scheduled to announced pre-Mayhem dates with Behemoth, but those have not materialized yet. We'll keep you posted. Cannibal Corpse HAVE announced pre-Mayhem dates with Obscura, The Faceless & Neuraxis, including on 4/24 at The Chance in Poughkeepsie. Full tour dates are below.

Devourment are hitting the studio on March 6th with D. Braxton Henry to record their 3rd LP, Unleash the Carnivore. SMN has more.

Grinding Aussies with the best name ever, Super Happy Fun Slide, have announced the release of their debut LP, The Undislodgable Nugget Scenario. Check out the ultra-lo-fi and ultra-brutal "Fast One" and "Bohemian" from that record above, and orders a copy at their label site, Bizarre Leprous Productions.

Kylesa added shows at SXSW and played NYC with Tombs and Amebix.

Opeth and Enslaved are touring together!

Album art for My Dying Bride's For Lies I Sire 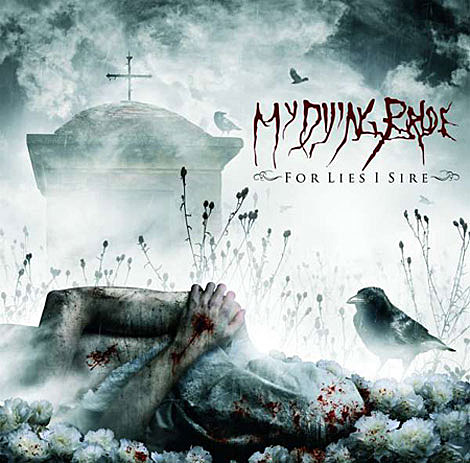 Obituary, Goatwhore (mems Soilent Green), Krisiun, The Berzerker, and Warbringer have teamed up for a North American tour including a date at Gramercy on Sept 29th. Tickets go on sale 2/26 at 10AM. Full tour dates are below.

A Storm of Light added a few new shows with Rosetta, Amenra, & Zoroaster. Check out the tour dates below. A Storm of Light's split with Nadja is due on March 3rd via Robotic Empire and the band will play Europa on Feb 15th with Amenra, Zoroaster, and I, Parasite.

US Christmas have lined up a few new dates this weekend and into February, leading up to their appearance at the Scion Rock Fest on Feb 28th. Dates are below.

So I went to see The Abominable Iron Sloth @ ABC No Rio on Saturday and unfortunately, the band was a no-show. Lambgoat has the story:

"We're sorry about having to cancel the rest of our tour, but we need to head home for now to regain our strength -- and I need to kick whatever death-like illness I've come down with. We'll definitely be back at some point, hopefully soon. To those of you who came out and the bands we've played with, we had a fucking blast."

Meshuggah, Cynic, & The Faceless have "opened up a video channel" that will allow fans to upload video from their tour into a central repository. Check out the widget below. Tickets for their show at Irving Plaza on 2/19 are still available.

Miss anything? Catch the last edition of Week In Metal, or the one before for more news on Wolves In The Throne Room, Cattle Decapitation, Ocean, Brutal Truth and so much more!

Elder have announced the release of their self-titled album on vinyl via Electric Earth. 500 copies in total will be pressed: 400 black and 100 colored. Elder released their S/T debut on MeteorCity late last year.

PUNISHMENT DUE:
Limited releases this past week, and only a pair of decent ones for this coming week, so dig on my favorite records of 2008.
Seprentcult - Weight Of Light Out NOW
Cannibal Corpse - Evisceration Plague Out 2/3
Zombi - Spirit Animal Out 2/3

NEWS BLAST (BEATS)
- Om have added a show at Berbati's Pan in Portland for 2/13 with Six Organs of Admittance & Valet.
- Pigsty & Jig-Ai are teaming up for a few dates in between their appearances at the Auditory Assault and Maryland Deathfest. Full tour dates are below.
- Pulling Teeth have posted a teaser for their new record. Check it out here.
- Karl Sanders of Nile has signed to The End Records and will release Saurian Exorcisms on April 14th.
- Atheist is currently booking shows for summer 2009 and "into 2010".
- Last.FM is currently streaming all of the new Diagonal LP.
- Obscura have posted a new track to their myspace, "Cosmogenesis", from the album of the same name due on Feb 17th.
- Darkthrone have completed two new songs for their upcoming follow-up to Dark Thrones and Black Flags.
- Candlemass have revealed more details about their upcoming album Death Magic Doom, due on April 3rd via Nuclear Blast. Check out the artwork here.
- Graf Orlock reviewed the Tom Cruise film "Valkyrie" for Decibel magazine.
- Psyopus, ABACABB, and Catalepsy have teamed up for a handful of mostly southern dates. Check 'em out below.