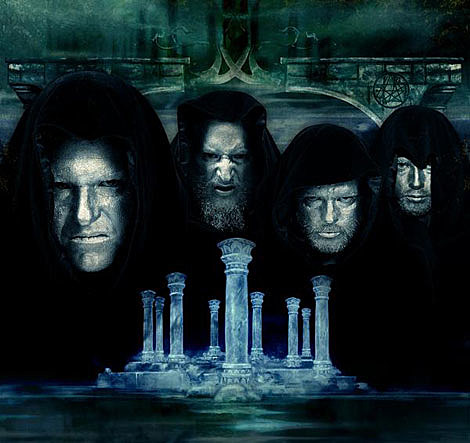 With Absu's new self-titled LP due only a few weeks away (Feb 24th), the band have announced their participation in CIII along with French black metallers Glorior Belli, Austin's Averse Sefira, and Sothis, including a date at BB Kings on June 21st! Tickets are currently on presale here and go on sale to the general public on March 5th. Glorior Belli recently dropped a preview of their upcoming album.

Funeral Mist, the black metal crew featuring Mortuus of Marduk, have announced their NEW album, Maranatha due on Norma Evangelium Diaboli (link NSFW) on Feb 23rd! Funeral Mist's last album, Salvation, was released in 2006. In related/as exciting news, Marduk have announced more dates for their previously reported US trek with Mayhem, Cattle Decapitation, Cephalic Carnage, and Withered including Irving Plaza on May 21! No ticket details as of yet, but we'll let you know when they surface. Full tour schedule below.

Javelina have announced the more details about their previously announced Sanford Parker-produced LP coming soon on Translation Loss. Their sophomore effort will include nine original tunes, as well as a Buzzov*en cover ("Whisky Fit") that will be featured on a upcoming tribute record (which will also feature contributions from Sourvein, Deadbird, Fistula, Kylesa, Zoroaster and many more). Look for the new record in late summer or early fall with song titles like "You're Going to Hate This", "Towers of Silence", "The Black Blizzard" and "Stepchild". 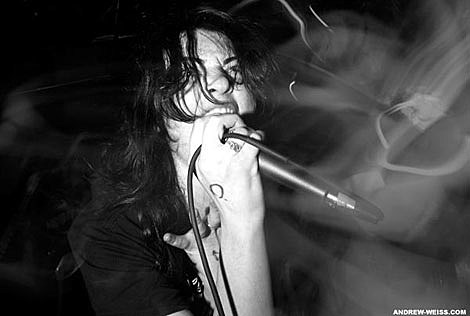 Landmine Marathon have scheduled an East Coast tour including TWO nights in NYC! On April 13th, Grace and the boys will descend upon Lit Lounge (Precious Metal) backed by Wizardry and Seizure Crypt. Three days later (4/16), the band have set aside the day to play an additional show in Brooklyn... details are forthcoming. Landmine Marathon are also on board to play both the New England Hardcore & Metal Fest, as well as the Los Angeles Murderfest. Full tour schedule below. Speaking of Wizardry, the band will record their entire live show at Union Pool on Feb 25th for later release.

Pelican have signed with Southern Lord! The band is currently recording material at Red Room studios in Seattle for what will be their debut EP for the label. Look for the new material to be "heavier, darker and very riff-oriented," according to guitarist Trevor De Brauw. Pelican also announced a slew of tour dates with Tombs (none in NYC), including a stint with Wolves In The Throne Room that will bring the trio to SXSW as part of the Southern Lord showcase. WITTR have a new EP AND LP on the way, and recently dropped a live LP, Live at Roadburn. 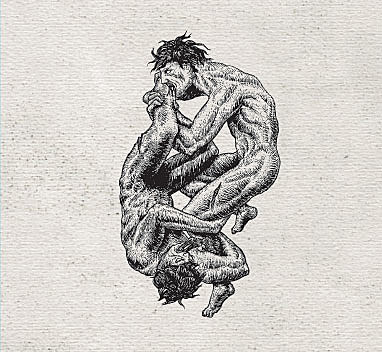 Deathspell Omega's Veritas Diaboli Manet in Aeternum - Chaining the Katechon EP, culled from their split with S.V.E.S.T. is out NOW at Southern Lord, and if you were a fan of their last LP, I highly reccommend it. Also of note at Southern Lord: Wolves in The Throne Room's previously mentioned Malevolent Grain EP, the new and mega-rare Boris/Michio Kurihara Cloud Chamber LP (1500 total copies) as well as the Boris Vs. Choukoku - More Echoes, Touching Air Landscape reissue. WITTR's new album Black Cascade is due on Mar 31st.

Speaking of WITTR, Scion Rock Fest is a little more than two weeks away, and we have 10 PAIRS of tickets and 10 Josh Graham designed posters for giveaway. In the meantime, dig on the recently posted set times below (thx anon)!

As we originally reported in September, sunn o))) has a new album on the way that we THOUGHT was called Dimensions. Turns out, according to an interview with The Quietus, the new album is due in May, will be entitled Monoliths & Dimensions, and will feature Jessika Kenney, Eyvind Kang, as well as frequent contributors Oren Ambarchi, Attila Csihar (Mayhem) and Dylan Carlson (Earth). Check out the tracklisting below. Speaking of Stephen O'Malley, the previously discussed Aethenor record, Faking Gold & Murder is out NOW.

Napalm Death's stupendous new album, Time Waits For No Slave, drops on Feb 10th and it's an utter triumph of punishing deathgrind that will surely make some year-end lists along with the new Tombs and the upcoming Kylesa. Highly reccommended. As discussed, ND will pummel NYC at the Gramercy on April 11th (tix here), but it wasn't until this past week that the full magnitude of their jaunt with Katalklysm, Toxic Holocaust, Abagail Williams, and Trap Them was released. Check it out below. Holy shit. Can't fucking wait. Check out some recent Napalm Death tracks above and a video interview with Shane Embury below.

An Interview with Shane Embury of Napalm Death

Spin magazine premiered a new Big Business track, which is available for download above.

Hellmouth have released their new album, Destroy Everything. Worship Nothing., via Ferret Music. Yeah, I know what you're thinking... members of Suicide Machines and on Ferret Music? But let me tell you, Hellmouth has little in common with the current crop of Ferret bands and more in common with purveyors of kick ass hardcore and blackened thrash... Don't believe me? Pick up the record at the Ferret Store on or iTunes.

The previously mentioned Krieg / Woe show on 3/1 as part of Show No Mercy just got a little bit more interesting with the addition of Malkuth and Liturgy! Check out the Seldon Hunt flyer below. Genghis Tron, Ocean, Tombs, Wetnurse, Crucifier, Castevet have all been added to upcoming Show No Mercy dates. 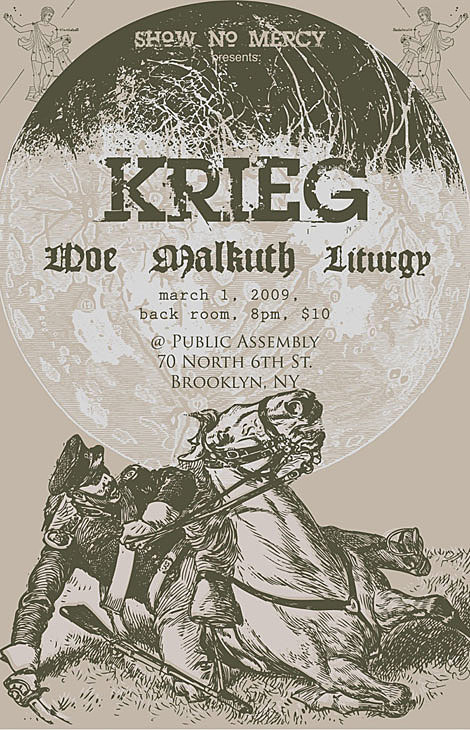 Ameseours featuring Neige of Alcest, will release their debut S/T LP for Profound Lore, the follow-up to their acclaimed 2007 EP Ruines Humaines. Pulling together influences that range from black metal to post-punk, the band have dropped a preview for your digestion... check out the mouth-watering MP3 excerpt of "Gas In Veins / Amesouers" available for download above. Profound Lore also recently dropped off the burning hot new Cobalt track, "Arsonry", from their upcoming Gin.

Spinefarm has will release Death Is Glory...Now, a compilation of Reverend Bizarre tracks from their vinyl releases, as well as a few "rare songs". Pick it up here on Feb 11th. Reverend Bizarre called quits in 2007, paving the way for the recently formed Lord Vicar.

We interviewed Mike Hill of Tombs.

Psyopus have posted another new song from their upcoming long-player Odd Senses due on 2/17 via Metal Blade. Check it out at their myspace. In the meantime, dig on their tour diary from Russia with photographer Justina Villanueva.

Failures (mems Charles Bronson, Orchid, Ampere, Cut The Shit), Total Abuse, and Salvation have teamed up for a pair of NYC shows, just in time for Valentines Day. Awwwww. The hardcore trio will play a matinee at Cake Shop on Feb 14th with Olde Ghost, followed by a show later that night at 538 Johnson.

Translation Loss have signed Struck By Lightning, a new project featuring Gregory Lahm, of ex-Mouth Of The Architect fame. Chris Common at Red Room Recording will handle the boards for a new album to be recorded in May of 2009, with a release in late summer of 2009.

Obituary are currently grinding away at a new album and have a webcam running in the studio 24/7. Check it out here. The band will tour Europe this spring, leading up to some festival appearances in July. Full tour dates are below.

Funeral doomers Ahab, who released the massive The Call of the Wretched Sea in 2006, have hit the studio to record the follow-up for a late spring/early summer release via Napalm Records. Containing seven songs, the record will be "based on the wreckage of the Essex".

An Interview with Paul Masvidal of Cynic

Need more? We got yer fix of Wino, Mastodon, Coliseum, Salome, Big Business in last week's edition and the prior edition of This Week In Metal!

PUNISHMENT DUE:
Do I really have to say it again? Time Waits For No Slave by Napalm Death caps off an otherwise lackluster release week, although I also vouch for the new Zu record, Carboniferous.

NEWS BLAST (BEATS):
- Atheist is releasing a Live At Wacken recording from 2006, and are currently recording new material for showcase during the tail end of 2009 and into 2010.
- Goatwhore, Fuck The Facts, Malignancy and many others will team up for the Central Illinois Metalfest. Full lineup is below.
- Meshuggah revealed in an interview in The Hornet, that they have a new DVD in the works, look for it this spring!
- Repulsion will play their first UK date EVER at the UK Deathfest on May 3rd in Leeds.
- Down is one of the few heavy music adds to Bonnaroo.
- Tripwire interviewed the mighty Dave Witte (Municipal Waste, Burnt By The Sun, Discordance Axis, Melt Banana).
- Magrudergrind have posted a new track from their upcoming LP.
- Verse have called it quits.