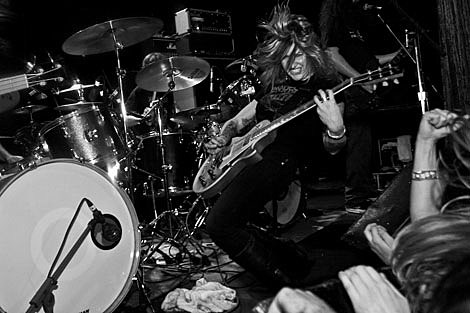 SXSW is upon us, and as such, so is the list of metal luminaries appearing in Austin! Check out the full list here, which includes Wolves In The Throne Room, Rwake, ASG, Pelican, The Lord Weird Slough Feg, Absu, Wildildlife, Rwake, and many many others!

In other news, one of those SXSW bands, Kylesa, will drop Unknown Awareness, the first single from the upcoming Static Tensions (due March 17th), via Hyperrealist. Limited to 1,000 copies with 400 on colored vinyl, we'll let you know when pre-orders hit the web, but in the meantime, dig on the recently dropped "Said And Done" also from Static Tensions available for download above!

After more than fifteen years in existence, black-metallers Ulver, will make their live DEBUT at the Norwegian Festival of Literature on Saturday, May 30 in Lillehammer, Norway. With a little luck, they'll realize what they've been missing and hit the road.... but probably not.

As we discussed last week, Gnaw is the terrifying new project from Alan Dubin (of ex-Khanate & OLD fame), Jamie Sykes (ex-Burning Witch), Carter Thornton (Enos Slaughter), Jun Mizumachi (ex-Ike Yard) and sound designer Brian Beatrice that meets at the corner of noise, metal, and dark ambient. Their debut, This Face, is due on 2/20 via Conspiracy Records, but the band has dropped off a taste of it in the form of "Feelers" available for download above!

If you're hankerin' for a hunk 'o Hammerhead and Melvins, Hex Machine have your fix twofold. The Richmond quartet (which once included skinsman badass Dave Witte) are preparing to drop their NEW record, Omen Mas on Feb 24th via their own imprint, Minimum Underdrive! Check out the severely kick-ass "Hook & Eyes" available for download above, and pick up Omen Mas from the band or at one of their shows, which include a date at The Charleston on March 11th with Dysrhythmia and Pollution! Full tour dates below.

Outlaw Order is playing Europa on March 24th. Tickets are on sale.

The "Agorapocalypse Now" is upon us.... the new track by Agoraphobic Nosebleed is streaming at their myspace. 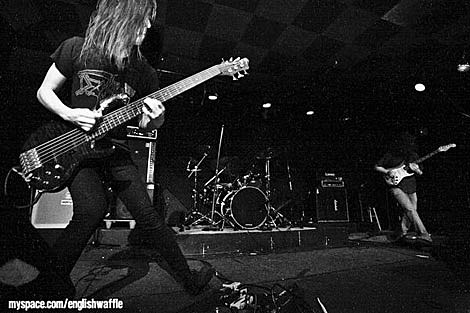 Speaking of Dysrhythmia, the band is currently hard at work on their fifth full-length, Psychic Maps! Colin Marston (bassist, mem of Krallice) will engineer the effort at his Menegroth studio in Queens, where he'll track six songs clocking in at around 40 mins. Dysrhythmia recently played Union Pool with Tombs.

Hardcore Canucks Buried Inside have posted a pair of tracks from their upcoming full-length LP Spoils Of Failure, due on March 3rd via Relapse. Recorded at Godcity Studios with go-to man Kurt Ballou (Converge) and mixed at Red Room Recordings with Matt Bayles, check out "II" streaming at their myspace and download "V" above!

Red Fang, featuring ex-mems of Facedowninshit and Bad Wizard, will release their self-titled debut on Sargeant House in March, and the band is hitting the road with Early Man in celebration, including TWO NYC area dates.... March 2nd at Maxwell's and March 4th at The Studio @ Webster Hall. Tickets for Maxwell's are on sale. In the meantime, dig on "Prehistoric Dog" available for download above and the accompanying video below... as Week In Metal continues...

Landmine Marathon have signed with Prosthetic Records. Congrats guys! In addtion, the band have added a show at The Charleston on April 17th... thats just a few days after they rock Precious Metal. 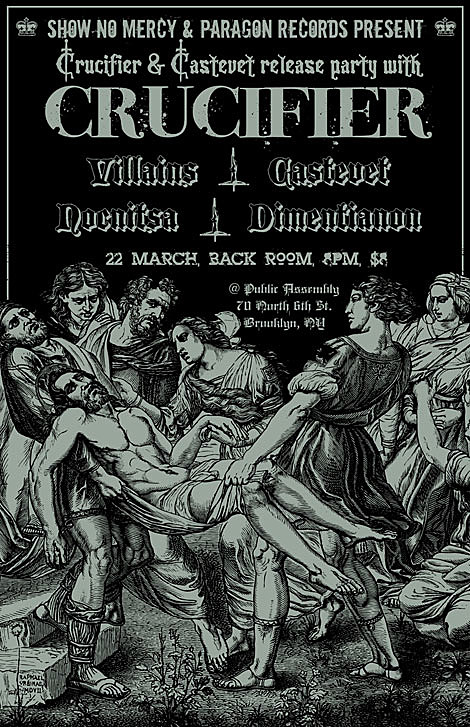 Napalm Death, recently shot a video for "Time Waits For No Slave" from their album of the same name which is out NOW on Century Media. Check out the updated (and final) tour dates from the band, available below. In related news, Mike Justain of Napalm Death's tour mates, Trap Them will play drums on the upcoming full-length by 108, entitled Forever Is Destroyed. 108 began tracking the record in Boston with Alex Garcia-Rivera (ex-Give Up The Ghost). Tour dates HERE.

Tombs is streaming all of their new album Winter Hours here. Check out our interview with Mike Hill of Tombs here.

These Arms are Snakes have announced a split 7" with BV CMJ alums and touring partners All The Saints. Look for it on Touch N' Go, who recently cut distribution.

Kill The Client, who released one of my favorite albums of 2008, have posted a new song from their upcoming LP Thousandswilldie.

Brutal Truth are BACK poised to show the whippersnappers how it's done on their upcoming monstrosity, Evolution Through Revolution due on April 14th via Relapse Records. The band is currently streaming the title track from their upcoming record at their myspace.

Amenra played Europa on Feb 15th, and if you missed it or went to Show No Mercy instead, the band will be back on Feb 28th at ABC No Rio on a stellar bill that includes Starkweather and Pulling Teeth. Meanwhile, Amenra recently dropped a compliation their ever elusive records in a single 2CD package, entitled Mass III-II + Mass IIII, and with a bonus track. Highly recommended, look for it on Init Records.

The Auditory Assault Festival added a ton of great bands, including recent additionsSplitter and Chainsaw To The Face.

Kreator's "Hordes of Chaos" video. I love the song, but if you have an aversion to sweaty shirtless muscle men in fur diapers, look away my friend.

Doomriders are currently working on their new album with Kurt Ballou at God City Studios, the first to feature JR Conners (Cave In). Look for it in late 2009. Doomriders recently dropped a split 7" with Disfear.

Amon Amarth, Goatwhore (mems Soilent Green), Skeletonwitch, and Lazarus AD have scheduled a east coast/southwest tour including one date at the Starland Ballroom in Sayreville, NJ on April 24th. Tickets are on sale.

Yob's demo will get the VIP treatment from Raven's Eye Records, who will release it on limited vinyl. Yob will hit the studio in March to record their NEW album!

Metalkult interviewed the man, Scott "Wino" Weinrich. Wino's new album, Punctuated Equilibrium, is out NOW and his new solo band, featuring Jean-Paul Gaster of Clutch on drums recently made their live debut. Check out fan shot footage below of Wino performing The Obsessed's "Lunar Womb". In related news, Clutch have announced that they are entering the studio to record their new album.

Minsk have completed the recording of With Echoes in the Movement of Stone, their new album due in the summer via Relapse. Sanford Parker held down the boards for this record as well.

Seventh Rule has signed Lord Mantis, a band featuring past and present members of the mighty Indian, Avichi, and Nachtmystium. Their new record, the Sanford Parker-engineered effort Spawning The Nephilim, is due on April 28 and the band is streaming a new track "Lord Mantis" at their myspace.

Mastodon is accepting pre-orders for a Crack The Skye Limited Edition CD/DVD package for $39.99. Check it out at their site.

Bones of Evil Army passed away. 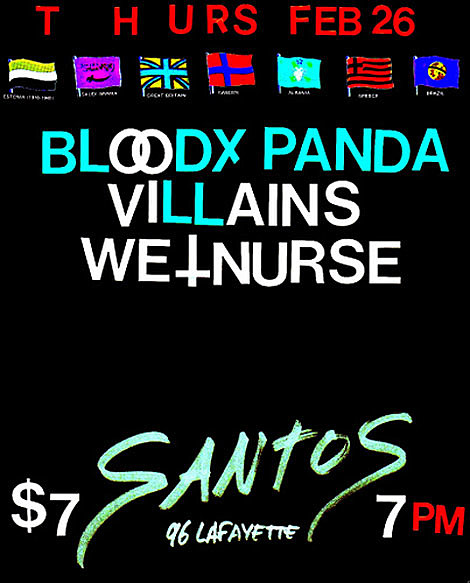 PUNISHMENT DUE:
LOTS of great releases this week, including one of my favorite so far this year (Tombs), a killer tech death record by Obscura, and a kick ass reissue in Victims' Killer.
Tombs - Winter Hours
Irepress - Sol Eye Sea I
Obscura - Cosmogenesis
Psyopus - Odd Senses
The Bakerton Group - El Rojo
Victims - Killer

NEWS BLAST (BEATS):
- Nachtmystium's Demise, their second full-length LP originally dropped on Autopsy Kitchen, will be released in CD form via Planet Metal Records. Interested? It's $11, and available via orders AT professorblack DOT com
- Vreid sat down for a three part interview. Check it out at Blabbermouth.
- Check out a multipart video interview with Obscura here.
- Russian Circles are planning a headlining tour in April before hitting the studio to record new material. Dates are on their way...
- Suffocation, the video game?
- Zombi is streaming their new album Spirit Animal here.
- Members of Blut Aus Nord have banded together to form 777, "a new industrial black metal project". BAN's new album, Memoria Vetusta II - Dialogue With The Stars drops on Feb 23rd.
- Solitude Aeturnus will release the audio portion of their Live DVD, Hour Of Despair, on Metal Mind Productions on March 10th. The audio/video was culled from a show in Warsaw, Poland in Feb of 2007.
- Graf Orlock, Phobia, The Abominable Iron Sloth, Aldebaran, and Early Graves have been added to the Los Angeles Murderfest.
- Stinking Lizaveta has posted a new track from their upcoming LP Sacrifice & Bliss at Headbanger's Blog. 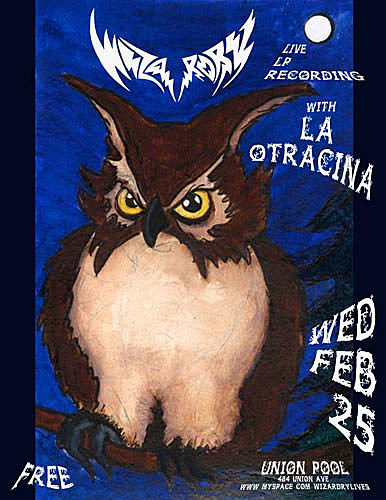