DOWNLOAD: Disfear - The Cage from "Live The Storm" (MP3)
DOWNLOAD: Saviours - Cavern Of Mind from "Into Abandon" (MP3)
DOWNLOAD: Wolves in the Throne Room - I Will Lay Down My Bones Among the Rocks and Roots from "Two Hunters" (MP3)
DOWNLOAD: Kylesa - Where The Horizon Unfolds from "Time Will Fuse Its Worth" (MP3) 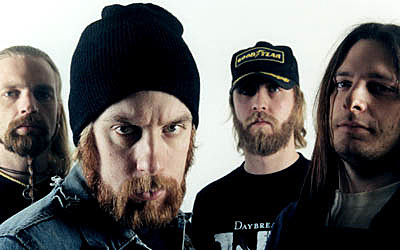 Disfear will bring "The Storm" across North America in April, including an appearance at the New England Hardcore & Metal Festival (that bill is unbelieveable), the Maryland Deathfest, and the Knitting Factory on April 16th with Bloodhorse. Tickets are on sale.

Unfortunately, the obituary (not the legendary band) section for this week is way too big. Modern Life Is War has called it a day, their recently announced spring tour will be their last. Check out tour dates below and get out to the show! Prog-metal legends Voivod have announced that their next LP for The End, constructed by riffs left behind by Dennis "Piggy" D'Amour, will be their last. Piggy succumbed to colon cancer in 2005. Current members Snake, Away, and Jasonic (aka Jason Newsted, ex-Metallica), will join ex-members Blacky and E-Force to put together the final 13 songs, and possibly do some farewell shows.

Kylesa will release a limited (1000 copies) Japanese/Australian edition of 2006's "Time Will Fuse It's Worth" with bonus tracks on Red Cobalt Industries in April. Currently working on the follow up to that mammoth LP, look for them to do a short run of the east coast at the end of May.

Agalloch will release the limited edition (2000 copies) "The White EP", a "stylistic counterpart" to 2004's "Grey EP", on Feb 29th on Vendlus Records. Don Anderson's (Agalloch) other project, Sculptured, has released "Embodiment" via The End. Check out some of the new songs.
West Berlin's greatest export (thats West Berlin, NJ) Fight Amp have announced a US tour along with the release of "Hungry For Nothing" out now on Translation Loss. Tour dates are below. Check out the video for "Late Bloomer"

Black Tusk will open for Weedeater on the next leg of their US tour, concluding in a SXSW showcase for Tone Deaf Touring with Bible of the Devil, Scale The Summit, and The Sound Of The Urchin. Black Tusk recently released "A Passage Through Purgatory" on Hyperrealist (available through Robotic Empire) and it's a Savannah thang... with John Baizley (Baroness)doing the cover and Philip Cope (Kylesa) on the boards. The guys have quite a few songs streaming and for download, so head on over to their myspace.

Hate Eternal is racking up the accolades for "Fury & Flames". Fresh off tour with The Black Dahlia Murder & 3 Inches Of Blood, Eric Rutan and the boys have announced a new headlining tour, this time with Soilent Green (mems Goatwhore, Eyehategod, Crowbar) & Skeletonwitch! Tickets are on sale for their April 28th date at BB Kings.

The Sword will swing down upon the West Coast to promote the upcoming "Gods Of The Earth" bringing Slough Feg and Children (mems Early Man). Tour dates below...

The new Saviours video "Narcotic Sea" from "Into Abaddon"

Vader have announced that they are finishing up "XXV" their new DOUBLE album commemorating their, you guessed it, 25th anniversary as a band. "XXV" will be also be offered in special edition form which will add an additional 16 minutes of audio and a bonus DVD with live footage. Vader will be out on this year's Summer Slaughter Tour.

Italians Ufomammut have announced plans for a "Idolum", their new album and first since their collaborative LP with Lent0, "Supernaturals". The album will be out in May in the US, but you can preview tracks at their myspace.

Crossover thrashers SSS are currently working on their Earache debut engineered by Andy Mason and with Pushead doing the cover art. Their stellar debut, "SSS" will see limited rerelease with four bonus tracks and bonus videos. Pick it up here.

Wolves In The Throne Room - "Vastness & Sorrow" Live on 1/31/08 in Groningen, Netherlands

News Blast (Beats)
- Salt Lake's own Gaza are hunkering down and have finished "half of" their follow up to the mighty "I Don't Care Where I Go When I Die", details forthcoming (courtesy Lambgoat).
- Frenchies Gojira are adding the final touches to their follow up to the massive "From Mars To Sirius" LP. Look for it in the fall after Joe Duplantier gets back from touring with Cavalera Conspiracy (the much hyped reunion of Max and Igor Cavalera).
- Deicide have uploaded a snippet of "In The Eyes of God" from "Til Death Do Us Part" due May 13th on Earache. In related news, Glen Benton's other project, Vital Remains will tour the US including a show at the Knitting Factory on March 26th with Monstrosity and Demiricous. Tickets are on sale. More tour dates below...
- Dig on "Bloodbath" by Swedish death-metallers Grave from their upcoming album "Dominion VIII" out April 21 on Regain.
- Trash Talk have left Deathwish, Inc and will enter Electrical Audio on March 16th to record their new self-released LP produced by Steve Albini (natch).
- Hungry? Try the new Lair Of The Minotaur burger! In related news, LOTM (along with xBxRx) side project 7000 Dying Rats recently did an interview with Metal Maniacs. Check it out here.
- Gore metallers Impaled were interviewed by turkish website (in English) Extreminal.
- Unearthly Trance has posted tracks from their upcoming record "Electrocution" on myspace.
- Dudefest has announced their lineup for 2008. Over three days in June (20th-22nd) Graf Orlock, Minsk, Coliseum, Demiricous, Ghostlimb, Lords, Insect Warfare, Nachmystium, Torche, Trap Them, Hewhocorrupts and many others will reign terror upon Indianapolis, IN.....
- Crust-Punk supergroup Venomous Concept comprised of members of Brutal Truth & Napalm Death (and at one point Buzzo from Melvins) have signed to Century Media for their new LP "Poisoned Apple". Brutal Truth recently reformed.
- Dysrhythmia will cause heart-palpitations across the US as they head out on tour from June to July. Tour dates below.
- Iron Maiden have added US dates to the "Somewhere Back In Time" tour that will land in them in NYC on March 14th (now sold out). Tour dates below....
- Tom Gabriel Fischer of the mighty Celtic Frost was interviewed by Metalkult regarding the reissue of the Hellhammer demos. Check it out here.
- New York DM legends Suffocation have announced US tour dates, including a date a BB Kings on July 13... Full tour dates below.
- When Chris Colohan of Cursed isnt gearing up for "III: Architects Of Troubled Sleep", he is playing in another project Burning Lovers. (Thx, Lambgoat)
- Tickets are on sale for the Progressive Nation Tour avec Dream Theater, 3, Opeth, and Between The Buried and Me. Tickets are for a whopping $49.50, astounding $150, and a jawdropping $300 (for the Meet & Greet Package)
- Gigantour has added a second night at Hammerstein, April 23rd. Tickets go on sale Friday, Feb 29.