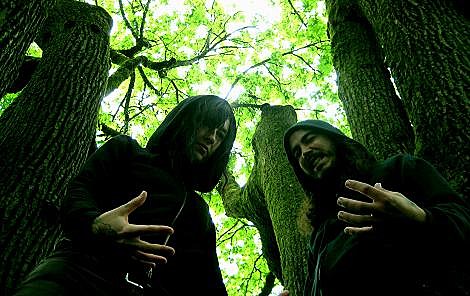 DIY is the name of the game for Florida's Dark Castle, as the duo has garnered a ton of buzz on the southern metal scene as of late due to their self-released EP and incessant touring. The northeastern touring love is on the way (this summer?), but in the meantime, Dark Castle's new LP, Spirited Migration is out NOW in digital formats (iTunes, amazon) with one of those amazing tracks, "Awake In Sleep" available for download above! Spirited Migration is due on May 26th in hard formats (CD, Vinyl) via the mighty At A Loss Records, so y'all wax lovers betta recognize!

Nebula will illustrate truth in advertising on July 7th when the trio drops their new album, Heavy Psych. Tee Pee Records will plead guilty to releasing the follow-up to 2006's Apollo, which includes "The Dagger" downloadable above. For the unaware, Nebula features former members of Fu Manchu, Mondo Generator, and Karma To Burn (who recently played Lit).

Australia's dark kings of blackened thrash, Destroyer 666, will release their NEW album on July 14th via Season of Mist! Defiance will be D666's first release in six years and first LP in seven, and will have artwork that'll look a little somethin' like this: Another set of Aussies, black metallers Nazxul, will release their first new material in more than ten years via Moribund! Look for more details on the new album, Iconoclast, in the months ahead as well as some US dates.

Show No Mercy on June 7th at Public Assembly is SET with the recent additions of the the ungodly Woe, Black Anvil, and Snake Sustaine (mems-ALOL) to the previously announced Salome. While we wait for the show, you can check out some recent interviews that the guys in Woe did here, here and here. Flyer is below.

Obscura has pulled out of the previously mentioned Relapse Contamination tour due to sickness, rendering all dates after May 11th cancelled. That includes NYC's date at Fontana's.

News and videos from Clutch, Ocean, Swarm Of The Lotus, Torche, Cripple Bastards, Orange Goblin and More, as This Week In Metal continues!

Ocean LIVE at Death By Audio

Swarm of The Lotus is BACK! In a recent myspace update, the band issued this statement:

"We aren't jumping into any extrvagent plans on touring but we aren't completely ruling it out... Overall, we want to keep the atmosphere pressure-free and layed back. We also have definate future plans on writing and recording new material and in fact, in the few practices we've had recently, we already have begun...

As far as the line-up is concerned, we have decided to become a 3-piece, which is a bit different than the bands' tradition, but we like the way it sounds and feels, and chemistry wise, it's perfect and we don't want to disrupt that. So the line-up will be:

We are ready to go and are hard at work putting together a set, in order to be able to play once again. Look for us to start playing shows by Fall-2009 or there abouts.... "

Clutch will release their upcoming J.Robbins produced LP Strange Cousins From the West on July 7th via their Weathermaker imprint. Look for the first single, "50,000 Unstoppable Watts", to drop digitally and accompanied by a music video before Memorial Day.

Besides their awesome LP, Evolution Through Revolution, their upcoming dates at Maryland Deathfest & Auditory Assault, the guys in Brutal Truth have something ELSE to be proud about... a new DVD! Season of Mist will drop For the Ugly and Unwanted - This is Grindcore, a collection of FIVE full shows by the band including one mutli-camera show from 2007 and four from the Animal Kingdom era! More details at Blabbermouth.

Torche - "Across The Shields" Music Video

UK doom monsters Orange Goblin, fresh off of their triumphant appearance at Roadburn that was recorded for posterity, recently released a few new song titles from their upcoming LP. Look for "Red Tide Rising" & "The Bishop's Wolf" to appear on their upcoming album, and catch them on tour in Europe!

Burnt By The Sun Heart of Darkness studio footage

PUNISHMENT DUE:
Lots of GREAT releases in the coming week, including the Dark Castle (loves it), Narrows, and a side project from members of Pelican (Chord).
Dark Castle - Spirited Migration
Narrows - New Distance
Big Business - Mind The Drift
Chord - Flora
Goes Cube - Another Day Has Passed

NEWS BLAST (BEATS)
- Crustcake has posted a new Elder mp3 for download.
- Justin Broadrick is now on Twitter.
- Multi-instrumentalist Erik Wunder of the mighty Cobalt will accompany Jarboe on her European treak.
- Motorhead & Reverend Horton Heat will team up for a few dates, including Atlantic City on 9/5. Dates are below.
- Bison BC are currently touring the Northwest. Dates are below.
- Reverend Bizarre's Harbinger of Metal and So Long Suckers will received the 2LP deluxe treatment via Svart Records.
- Baroness are currently working on the follow-up to the Red Album, due in 2009!
- Lords will hit the Canadian highways in June with Barn Burner, Titan (the Canadian one), Vilipend, dates are below.
- Metalsucks interviewed Barney Greenway of Napalm Death.
- Alexi Laiho of Children of Bodom broke his shoulder, but will soldier on with Lamb of God, Municipal Waste, and others on the No Fear Energy Tour.
- Willowtip has signed German DMers Defeated Sanity.
- Check out an interview with Johannes Persson of Cult of Luna.
- Earache is reissuing Iron Monkey's first two albums, Iron Monkey & Our Problem, with bonus tracks.
- Check out an ENTIRE Outlaw Order show here, and if you're in LA, make SURE to catch them at LA Murderfest with the mighty Eyehategod!