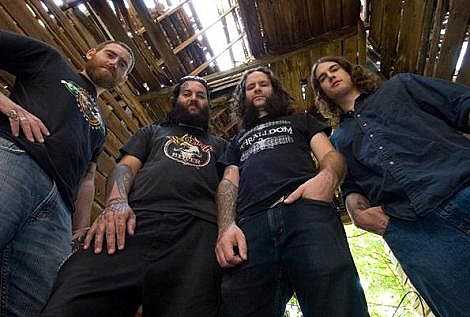 Lots of ground to cover, since we missed ya last week, so lets get right to it with the mighty Minsk! The Chicagoan's new album With Echoes In The Movement Of Stone is out now, and it definitely delivers on the promises of The Ritual Fires of Abandonment. Highly recommended, as evidenced by the monstrosity "Three Moons" available for download above!

At The Charleston on 5/29, I managed to catch the pummeling Magrudergrind along with the equally awesome powerviolence of The Endless Blockade. The pair are touring surrounding their MDF appearance, and while TEB doesn't have a new album out, Magrudergrind DOES; a self-titled LP available now via Willowtip! Cop that here, and cop a pair of songs from the record above!

Also up at Willowtip, the new LPs by Defeatist and Afgrund! The new Defeatist LP, Sharp Blade Sinks Deep Into Dull Minds, is actually a compilation of previous EPs and other releases, but definitely provides a good preview as to what these grinders are about before their new LP drops (soon). Meanwhile Afgrund's new LP, Vid Helvetets Grindar, is also on preorder. Check out the band's deathgrind-y groove on tracks like "Klinisk Digital Kyla", "Borja Fran Noll", both downloadable above.

Check out two noteworthy streams... Khanate's Clean Hands Go Foul and Xasthur's All Reflections Drained. Both albums are out NOW via Hydra Head Records. In the meantime, check out an awesome interview with James Plotkin of Khanate and make sure and buy that Khanate hunting knife too!

Goes Cube are finally home from their tour promoting the massive Another Day Has Passed. Their "homecoming show" is scheduled for tonight (6/5) at Union Hall with The Detachment Kit amd The Thin Man. Tickets are still available.

Ancestors have completed recording their follow-up to last year's Neptune With Fire. Featuring four songs, and three interludes, I had a chance to preview a few tracks which are definitely as epic as their previous material, and just as compelling. Look for Sera Timms from Black Math Horseman and David Scott Stone to make an apperance on the as-yet untitled LP, and look for more news very soon!

A member of Pelican and a member of Tombs have agreed to a "bro tat" commemorating their current tour together. So what you say? YOU can decide what it is! Pictures from their recent show together at Irving Plaza are HERE in case you missed them.

Black Pyramid has released their new self-titled LP on the doom stable Meteor City Records. While vocalist Andy Beresky comes off sounding like J.D. Cronise at times (NOT a bad thing), these Massachusetts boys definitely are in a whole different category than The Sword. With an ability to balance their bombastic blues riffs with stylistic touches of the greats (ie Electric Wizard, Sleep, Pentagram, etc) without sounding derivative, check out a video for Black Pyramid's "And The Gods Made War/Visions of Gehenna" below and download "Visions of Gehenna" above! Full BP tour dates are below, including their appearance at the Stoner Hands Of Doom Festival.

That video and Thou, Indian, Ulver, Brutal Truth, Wolves In The Throne Room, Municipal Waste, and Narrows as This Week In Metal Continues...

Thou have released Through The Empires Of Eternal Void, an LP featuring four reinterpretations of Black Sabbath tunes. Pick that up here, it is in EXTREMELY limited numbers. In the meantime, download all four tracks of the LP above! In other Thou news, the band has repressed their awesome Peasant LP on Southern Lord. Pick that up here.

Indian is hitting the road in June including a show scheduled in NYC on June 12th at Rock Star Bar. Full tour dates are below. Indian released Slights And Abuse / The Sycophant via Seventh Rule in 2008 and share a band member with Lord Mantis.

Destroyer 666 have posted "A Stand Defiant" from their upcoming LP Defiance, due July 14th on Season Of Mist. Stream that here.

The mighty Bone Awl are currently touring with Volahn and will impact NYC on June 19th at Fontana's with a special guest appearance from Canada's own Akitsa! Full tour dates are below. The band is currently touring off of their Night's Middle 7" out now on Klaxon Records. 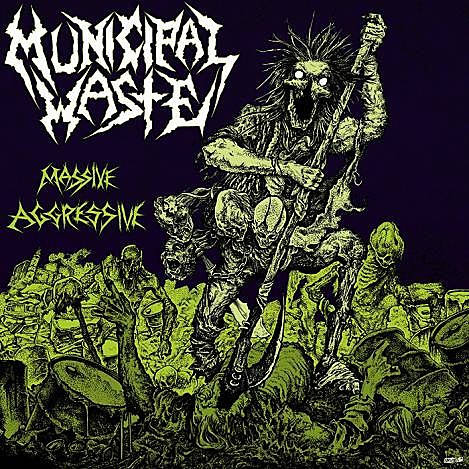 Both Averse Sefira AND Glorior Belli have bailed off of their tour with Absu and Sothis, which recently added Rumplestiltskin Grinder. That includes the previously discussed NYC date at BB Kings on June 21 (tickets still available). Disappointing yes, but I can definitely vouch for Absu's power live after seeing them at SXSW.

Gnaw Their Tongues are prepping to release all the dread magnificence of perversity on Crucial Blast with Burning World Records doing the vinyl honors. The vinyl will contain exclusive tracks, and is pre-orderable here.

Portal have released their demo on a limited edition 7". Pick that up here.

An Interview with Aaron Weaver of Wolves In The Throne Room by HardTimes.Ca. As always, he is fascinating. We interviewed him here, and WITTR recently played The Studio @ Webster Hall. Check out a video of their ENTIRE SET at Europa below!

The ever-prolific Nadja have released a new 12" entitled Clinging To The Edge Of The Sky via Vendetta @ Adagio830 Records available here. Nadja released their covers LP When I See the Sun Always Shines on TV via The End Records in April.

Asshole Parade is currently scheduling an East Coast tour including a date in NYC that is TBA and another confirmed at The Charleston on August 16th. Full tour dates are below.

If you missed it, Complete Failure is giving away their new album, Heal No Evil.

Ulver have added 200% more shows, just after before their first live show in 15 years Oslo this weekend. Look for them at Mollafestivalen 2009 and at pstereo 2009 in August.

Dysrhythmia is currently streaming a pair of new tracks on their myspace page from their upcoming LP, Psychic Maps. The band also added a few east coast dates including July 18th at Union Pool. Full tour dates are below.

Brutal Truth performing "Evolution Through Revolution" in San Fran is below. Tickets are on sale for their previously announced show with Repulsion and Pig Destroyer!

Goatwhore is currently streaming "Apocalyptic Havoc" from their upcoming LP Carving Out The Eyes Of God due on June 23rd via Metal Blade. Goatwhore will be in NYC at Gramercy on September 29th with Abigail Williams. Tickets are still available.

For all of you that made it down to Maryland Death Fest, yada-yada-yada, I realize it was awesome. I realize that Pestilence had to cancel their appearance and that Bolt Thrower played TWICE instead. Is it wrong to say I hate you? I guess I will have live vicariously through photo sets by Return To The Pit (here, here, and here).

While we wait for the Grey Machine LP, pick up the 12" single at Hydra Head. And if you haven't heard it, pick up the "Vultures Descend" MP3 that we posted in September.

So just kick me while I'm down, why don't you! I know that I also missed Chaos In Tejas, but luckily Austinist has a short breakdown for me (here, here, here, and here)

Check out an audio sample of "Everything Said Before" from the upcoming Drudkh (mems-Hate Forest) LP Microcosmos.

Stream three songs on the upcoming Anaal Nathrakh album, In The Constellation Of The Black Widow, via e-card.

Dismember will release a new DVD, Under Bloodred Skies, in June via Regain. The 2DVD set will include footage from two shows in Europe as well as tons of backstage material and bonus features.

Irepress are hitting the road with Junius and will impact The Studio at Webster Hall on June 12th with Moving Mountains. Tickets are available here, and full Irepress dates are below. Irepress released Sol Eye Sea I earlier this year.

The great Collapsar has decided to call it a day.

The Dillinger Escape Plan have announced that they will leave Relapse Records to form their own label, Phonogetic Records, which will work in collaboration with Season Of Mist. The band talked about it with Metal Insider.

NEWS BLAST (BEATS)
- The previously discussed sunn 0))) / Pan Sonic 10" is now accepting pre-orders.
- Check out two songs streaming from Voivod's final album Infini at their myspace.
- Three Inches Of Blood will release their new album Here Waits Thy Doom via Century Media on 9/8.
- Check out an interview with Chris and Mike of Pulling Teeth at SMNNews.
- Tom Warrior has signed a publishing deal with Bazillion Points (who released the ultra-comprehensive Swedish Death Metal book last year) to release Only Death Is Real a history of Hellhammer and early Celtic Frost.
- Check out pics from the Hull record Release Party at Charleston.
- Maryland Death Fest has set May 28th to 30th as the dates for 2010.
- Paste Magazine is hosting a studio diary by Baroness. Baroness will hit the road with Clutch this summer.
- UK Stoner faves Taint will drop a new EP, Despite Isolation in October.
- Check out an interview with Salome regarding their appearance at Scion Rock Fest.
- MyYearbook conducted an interview with Mikael Akerfeldt of Opeth. HardTimesCA did too.
- Vader have completed work on their new album, Necropolis, due in August via Nuclear Blast.
- Stream an audio interview with Nergal of Behemoth conducted with Metal Hammer here.
- Brann Dailor of Mastodon was interviewed by Nikki Blakk of San Francisco's 107.7 The Bone. Check out the videos here.
- Impaled Nazarene will reissue Tol Cormpt Norz Norz Norz and Ugra Karma on Osmose Productions as gatefold double 10", limited to 700 copies each. Look for them June 15th here.
- Check out some Bison BC live footage from Cologne, Germany and an interview here.
- Engineer and TidesTides are scheduling dates for a summer tour. Get in touch with the band to help out.
- Crowbar will re-release "the majority of" their back catalog (and on vinyl) via Housecore Records.
- Check out a video interview from Ft. Worth, TX with Barney Greenway of Napalm Death.
- Joel Grind of Toxic Holocaust conducted an interview with Hardtimes.ca here.
- Get a riff lesson from 1349 courtesy Guitar World.
- Nuclear Blast has signed Textures.
- Stream an audio interview with Aaron Turner of Isis conducted by Australian radio show Triple J's The Racket here via WindowsMedia. Fast forward to minute 51.
- Suffocation will film a video clip for the track "Cataclysmic Purification" on May 31 with director David Brodsky.
- Decibel's editor Albert Mudrian will issue Precious Metal, a new book that will compile expanded interviews from the Decibel Hall Of Fame series of the reknowned magazine. For more on the book, head here.
- Stream the new Coalesce at Lambgoat.
- Check out a piece that the LA Weekly ran on sunn 0))).
- Bison BC will team up with Woe of Tyrants and Lazarus AD for a few dates
- Buried Inside is hitting the road, having scheduled a string of dates with the mighty KEN Mode and Battlefields.