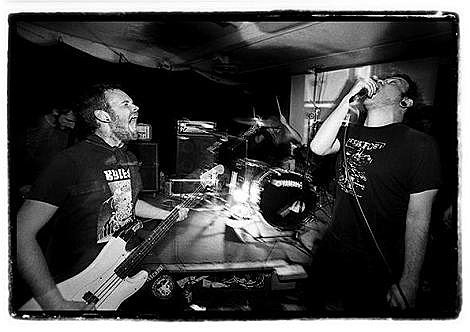 Though the rain is mostly gone, it's still a doomy gloomy day here at Week In Metal, where we kick things off with Fall of Efrafa, who have dropped their FINAL album of thundering post-hardcore sludge on Denovali. It's called INLÉ and takes inspiration from an extremely unlikely source, the book Watership Down. The final in a trilogy of LPs that also included OWSLA and ELIL, INLÉ is available for FREE download above of for purchase via Denovali or Sound Devastation.

More details on Shrinebuilder have surfaced, including the FULL album art, as well as the tracklisting for the upcoming self-titled LP. Dig on that art here and the tracklisting below. Speaking of Al Cisneros, Vice blog recently interviewed Sleep and Om are on their way to NYC.

Roadburn has announced that 2010's Roadburn event will be partly curated by none other than Tom Warrior of Celtic Frost/Hellhammer/Triptykon fame! His new band Triptykon will headline Only Death Is Real, the Friday 4/16/10 event, and Tom will choose an additional 16 bands for the festival! Stokeage. More info is to come.

San Francisco's Flood, who take a line or two from the great Khanate with their low & slow doomy funeral marches, recently dropped their new LP Native on the esteemed MeteorCity (get that here). Check out a track from that massive LP, "Aphelion", which is downloadable above. Flood currently has no plans to head out east, but here's for hoping! 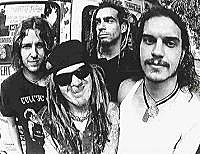 It was recorded in Brooklyn by Shane and mixed by Mike Davidson and Brian Hill. Its 4 songs including "Nod" which was previously released on a split with Sourvein. The 3 other tunes are "Paintake","Breed" and "Mainline". "Mainline" got redone by the At A Loss lineup, but is actually a good bit different... with the original lineup of Brian Hill on bass, Ash Lee on drums, ...and this is the only recording with Johhny Brito on gtr. [Also look for] ...Pat Vigil now in Watch Them Die doing 2nd vocal on "Breed"!!

Meanwhile, Kirk Lloyd's current project, KK Lloyd & The Disciples (which includes Brian Patton of Eyehategod/Soilent Green and Jimmy Bower of EHG/Down) have scheduled a few shows in the NOLA area and are wrapping up the mixing and tracking of Purepainblues, the new album. A Hydra Head spokesman has stated that 2010 will see the release of the long-awaited Revelation: Sick Again LP by Buzzov*en. Sourvein are scheduled to play Union Pool next week with Saviours.

The legendary Autopsy will reunite at Maryland Deathfest 2010 bringing along with them Coffins, Melechesh, and Jesus Crost! Chris Reifert's current home, Abcess, recently released a split with Population Reduction.

More on Brutal Truth, Culted, Salome, Napalm Death, Torche, a new grind-fiesta in Williamsburg, and so much more, below...

Culted's new LP of "blackened psychedelic doom", Below The Thunders Of The Upper Deep is out NOW via Relapse Records. Their glacially paced doom brings to mind the less speedy works of Stephen O'Malley, and the band is currently streaming a pair of tracks at their myspace. In addition, download "Social Control" from the new LP above!

Gojira are doing select dates on the Metallica/Lamb of God tour, but in between those, you can look for the band to play a string of US dates with Zoroaster and Burst including Music Hall of Williamsburg on 9/21! Ticket info is forthcoming, full tour routing is below. Zoroaster are scheduled to play Studio @ Webster Hall on Aug 9th as part of the "North America is Doomed" campaign with The Gates of Slumber and Serpentcult.

Salome, Hull, and Batillus are hitting the road together in Septmeber, but need help filling in dates. Full list of TBA's are below.

Add another awesome US festival to the must see list. Planet Caravan is scheduled to take place on Sept 18th and 19th in Ashville, NC, featuring a collossal lineup of Pentagram, Clutch, Orange Goblin, Wino, Yob, Kylesa, Burst, and many others. Meanwhile, Clutch has made "Metroliner Express" from Strange Cousins From The West available for free download.

Year of No Light, who have not released a follow-up to the MASSIVE Nord (much to my chagrin), but will release a new live LP/DVD via Burning World Records, Live at Roadburn 2008. The pressing is available in black (300 pieces), gold (100), and silver (100) vinyl.

Doomriders new LP, Darkness Come Alive, will hit the racks on 9/29 via Deathwish Inc. The band will hit Union Pool on August 9th.

Show No Mercy BV-BBG on August 2nd at Public Assembly! 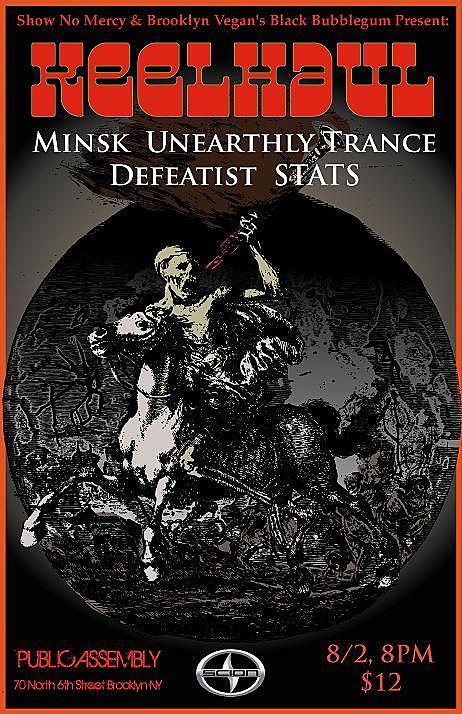 UK Crust-metallers Hellbastard are hitting the road with Resistant Culture and have scheduled an NYC show at Europa on Fri Sept 25th. Tickets are on sale. Full Hellbastard dates are below.

Asshole Parade has scheduled two NYC dates including Aug 20th at The Charleston with Vermefug & Apeshit! and August 16th at Cake Shop. Full tour dates are below.

Lewd Acts, who I enjoyed earlier this year with Graf Orlock, will release their new LP, Black Eye Blues, via Deathwish 9/1. Engineered by Kurt Ballou, you can stream audio from that upcoming LP here.

Defeatist - "No One and Nothing" LIVE at The Charleston. Defeatist are scheduled to perform as part of the BBG co-curated Show No Mercy on August 2nd with Keelhaul, Minsk, Unearthly Trance, and STATS.

Harvey Milk & Torche are currently on tour and will land in NYC on SUNDAY (7/26) at Music Hall of Williamsburg. Tickets are still available. Make sure you hit up the ATM before you go, as Harvey Milk will have limited numbers of a tour-only 2LP, previously known as The Bob Weston Sessions (more about that here). Don't forget Torche's table either, as they'll have the a repress of the first Floor 7" (featuring Steve Brooks & Juan Montoya of current & ex-Torche fame), "Loanin'/Figbender". Beetlenation is doing the honors and it is limited to 500.

Unearthly Trance has dropped more details on their upcoming LP, as well as some more details about their upcoming split with The Endless Blockade. Besides the upcoming Show No Mercy-BV-BBG event on August 2nd, the band will also take part in the Quest For Dread festival at Rock Star Bar on August 22nd. The doom/grind/powerviolence festival features a venerable lineup of badasses including Chainsaw To The Face, Drugs of Faith, Triac, Psycho, Spoonful of Vicodin, and many many others. Flyer below.

Two interesting side projects worth mentioning.... first up Crucifist, who will release their debut LP Demon Haunted World via Profound Lore on Sept 22nd. Featuring Danny Lilker (Brutal Truth, Nuclear Assault, others) as well as members of the doom band Orodruin, Crucifist toils in the early black metal sound found in early Darkthrone, Bathory, Venom, and Celtic Frost. Check out "Honor" downloadable above. In addition, members of General Surgery and Dismember have teamed up to form Iron Lamb. Check out their myspace for three streaming demos.

This week we have TWO major tours that are swinging through the US in the coming months. First up Nile will team up with Immolation, Krisiun, Abigail Williams, and Dreaming Dead as part of the "Those Whom The Gods Detest tour" scheduled for the start of the 2010. Set aside Jan 18th at Gramercy NYCers. Presale tix are on sale NOW here through 8/13, with gen pop getting their crack at 'em on 8/14. Secondly, details are trickling in about The Masters of Death, a tour headlined by Vader featuring Decrepit Birth, Warbringer, The Amenta, and Augury which includes an NYC date at Gramercy on November 11/7. Tickets are available now. All known tour dates for both tours are below. Warbringer vocalist John Kevill was recently interviewed by Talking Metal, which is downloadable here. Brutal Truth play Masonic Temple on July 31 with Repulsion and Pig Destroyer, tickets are still available. In the meantime, dig on the video for "Sugar Daddy" viewable below.

PUNISHMENT DUE:
Culted - Below The Thunders Of The Upper Deep
Howl - S/T EP
City of Ships - Look What God Did To Us
Fall of Efrafa - Inle
Flood - Native
Ahab - The Divinity Of Oceans
Year of No Light - Live at Roadburn 2008
Cave In - Planets Of Old 12"
Clutch - Strange Cousins From The West
Heims - Worship or Die
Nazxul - Iconoclast
Drudkh - Microcosmos

NEWS BLAST (BEATS)
- The latest edition of Show No Mercy is available, featuring interviews with YOB, < code >, Magrudergrind, Heims and so much more.
- Cave In are streaming the Planets of Old 12 Inch in it's entirety. The 12" is sold out.
- SMNNews interviewed the great Mike Scalzi of Slough Feg!
- FaceCulture recently did a four part interview with Bill Kelliher of Mastodon here.
- Restricted Release will do the 10-inch vinyl honors on The Company Band's (mem Clutch) Sign Here, Here, And Here. Look for it in a limited to 1,000 edition on 9/15.
- Fenriz of Darkthrone has posted a mixtape over at Vice. Make sure and DL a copy here and check out the track listing here.
- Check out an exclusive interview with Suffocation done by Terrorizer
- Details regarding the Fest 8 in Gainesville have been released.
- 16 Drummer Jason Corley has left the band amicably. Mateo Pinkerton (Crom, Buzzoven) has been added in his stead.

Shrinebuilder LP Tracklisting:
1 Solar Benediction
2 Pyramid Of The Moon
3 Blind For All To See
4 The Architect
5 Science Of Anger