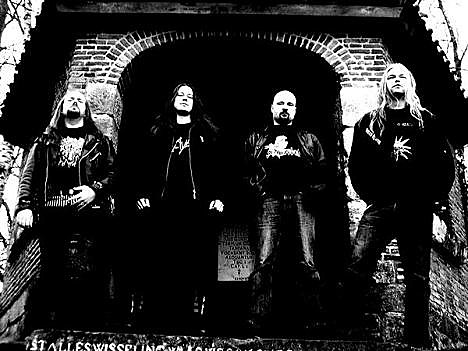 Thanks all who came out Sunday night to Public Assembly. Full recap and pics coming soon HERE. In the meantime, pics from Friday's Repulsion show are HERE.

Asphyx's Death... The Brutal Way is due out in the US on August 18th, but it's shipping NOW at the Ibex Moon site. It's a sickening death/doom trip that's part down-tuned riff fest, part beastly conjuring, but 100% heavy heavy heavy. Recommended for fans of old school death metal, Entombed, Dismember, Autopsy, and the like. Check out one of the tracks, "Scorbutics", available for download above.

Gods & Queens currently have a new split 7" on the way via Hawthorne Street with the mighty Medusa, and have taken the time to drop off a killer cover of the Quicksand classic, "Head To Wall"! Download that above.

Weedeater have announced that Steve Albini will record their new album, which will be available in Spring 2010.

Swallow Your Teeth is the end of a long road for Richmond's The Catalyst, as the band has dropped multiple releases over their seven year history but THIS is their first LP! The noise-core merchants are currently streaming their Swallow Your Teeth at Scene Point Blank, but you can download the sick opening track, "I Hate The Future", above! The Catalyst have a few shows in the very near future, including The Glass Door on August 14th and a TBA show lined up for Aug 15th in Manhattan. Full tour dates are below. Pick up a copy of Swallow Your Teeth here.

Attention hardcore fans! Lambgoat is reporting that the legendary Disembodied will release Psalms of Sheol on Prime Directive in August, comprised of thirteen tracks of rare and unreleased material that includes the Existence In Suicide MCD and the Confession 7". Disembodied has reunited and sporadically played shows recently. 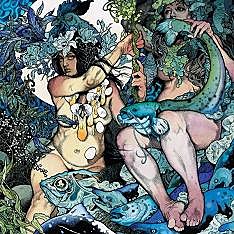 Baroness has a new album on the way, which we knew, but we now can attach a name to that effort Blue Record! The LP was recorded in Dallas, Texas with producer/engineer John Congleton (Explosions In The Sky, Black Mountain) and will hit the racks in October. Meanwhile, dig on the cover art (to the left) and the tracklisting below!

First of all, The Endless Blockade would like it be known that they "have not broken up". As a matter of fact, they finally released their split with Agoraphobic Nosebleed and have a split with The Bastard Noise out soon (stream the new BN track here). The boys in TEB "just figured another band would give us even less time in our lives to do anything else". That new band? Slaughter Strike.

Candlelight records has signed the mighty midwestern band The Atlas Moth, whose new album A Glorified Piece of Blue Sky will be released on Oct 6th. The band dropped their massive EP, Pray for Tide, on Witch Trial last year.

Planks have reissued their 2008 split with Tombs as the "European edition" featuring artwork by Mike Wohlberg. If you never got a hold of the Black Box Recordings version, it is highly recommended. Pick that up through the either of the bands on tour. Meanwhile, Planks recently made their massive S/T LP (where these two songs came from) available for free download! Pick that up above. Mike Hill of Tombs has posted all of the lyrics from the massive Winter Hours via his blog.

Crucial Blast is set to release Overmars's 2008 LP Born Again. The LP combines electronics, ambient soundscapes, Swans industrial dirge, and the thunder of Neurosis to create a different and powerful take on post-metal. The band is scheduled to hit the US with the mighty Battlefields, logging a pair of dates in NYC: Europa on August 16th and September 3rd at The Charleston. This will destroy.

Mastodon, High On Fire, Converge, and Dethklok announced dates (and a presale).

The premiere of the NEW Goes Cube video for "Saab Sonnet", more news on Black Sun, Absu, Trap Them, Kylesa, Anaal Nathrakh, and Darkthrone as This Week In Metal continues.....

Metal Blade Records has signed Lightning Swords of Death, who are heading out on tour in August including a stop at Lit Lounge on 8/17 with the the killer pairing of Liturgy and Bastard Sapling. Congrats guys! Full tour routing is below.

Nadja are hitting the road in September & October, and have a pair of releases on deck in the coming months: Under The Jaguar Sun and Belles Betes (stream it) on Beta-Lactam Ring Records. Under The Jaguar Sun is available in two formats, with the CD version containing an ambient and a not-so ambient disc that can be played individually or together, and an LP that blends the two. Stream the vinyl mix here. 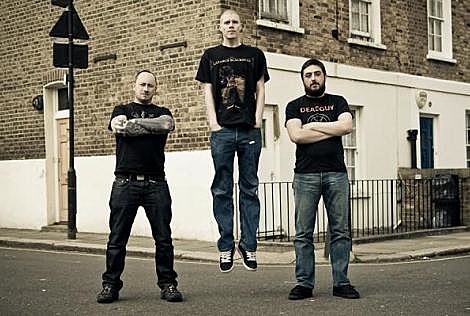 The great UK sludge gods of Black Sun have released a split 7" with They Are Cowards available on At War With False Noise. Black Sun's thundering 12" Paralyser was released last year and it comes highly recommended for fans of Godflesh/Neurosis and sludge/doom hounds. It's a rager! They Are Cowards released their debut demo last year, pick that up above.

Relapse will release the new LP by Weekend Nachos, Unforgivable, on digital and CD format. Download "A Few Blocks South", which we premiered here, and make sure and check out the band on 9/4 at Rockstar Bar!

Matthew Bower of Skullflower has formed a new project called Voltigeurs that is described as "Black Metal in it's purest form". Pick that up here.

Toxic Holocaust are hitting the road, and have scheduled a show in NYC with the mighty HOWL and Attake at Club Europa on 9/6. Tickets are on sale. Howl also is scheduled to take on Fonatana's with The Funeral Pyre on August 6th. That jawn is FREE!

Kowloon Walled City is currently streaming tracks from their upcoming LP Gambling On The Richter Scale, due on Perpetual Motion Machine. Check those tracks out here.

Blackened funeral doomers Celestiial will release their second LP, Where Life Springs Eternal, via Bindrune Recordings.The album will no longer be a solo affair, as the mastermind behind Celestiial, Tanner Anderson, has also recruited Tim Glen (percussion) as well as Jason Walton (bass) of Agalloch. More details are forthcoming. In the meantime, Blood Of The Black Owl (who shared a split with Celestiial) will release A Banishing Ritual in the near future though details are still undisclosed. Check out a preview of A Banishing Ritual below.

Fight Amp are hitting MYC in the coming month, having laid out a show on Spet 8th at Alligator Greepoint. The band is currently streaming a new track at their myspace and their ssplit with Black Tusk is on pre-order. Meanwhile, the ASG/Black Tusk split is on sale. Tour dates are below.

Lock Up, the grindcore group featuring Tomas Lindberg of At The Gates/Disfear, Shane of Napalm Death, Anton Reisenegger of Pentagram, and Nick Barker of Testament, will reform to play UK's Damnation Festival along with Electric Wizard, Jesu, Destruction, and many others.

After their upcoming dates with Zoroaster and Gojira, Burst will go on indefinite hiatus. Sigh. Why do all of the good ones wither away? Tickets are on sale for their date at MHOW on 9/21.

Javelina have added a ton of tour dates through Oct, though none in the northeast. Dates are below. Can you help book Alberquerque or Phoenix? Contact the band!

Kylesa has announced a gang of tour dates though no new ones in NYC since word has come through that they are no longer playing Santos Party House on 10/19. The long delayed Victims / Kylesa split is finally going to see the light of day via Deathwish Inc in November. Details are forthcoming. Dates below.

Urgehal is hitting NYC, having laid out 9/14 to decimate Europa with Spearhead and (again?) Eyes of Noctum. Tickets are on sale. No, that is NOT the Michael Franti-fronted Spearhead.

Anaal Nathrakh was recently interviewed by Iann Robinson. Anaal Nathrakh's In The Constellation Of The Black Widow is out NOW via Candlelight.

Municipal Waste, who are gearing up to tour Europe including a stop in the UK for Reading/Leeds, have announced that they will tour the US in November to promote Massive Aggressive, due via Earache on August 25th. More details are forthcoming, current tour routing is below. Preorder Massive Aggressive here.

Nocturno Culto of Darkthrone will pen the intro to Only Death is Real, the illustrated history of Celtic Frost and Hellhammer. Darkthrone was recently interviewed by Faithcraft Productions.

Providence' RI's The Body have scheduled a pair of NYC shows including Lit Lounge on 9/7 with Dark Castle, Malkuth, and Orphan, as well as a TBA show on 9/13 in Brooklyn. Details are forthcoming.

Besides the previously mentioned show at The Charleston, Cannabis Corpse have added another TWO shows on Oct 3rd including an ABC No Rio matinee and a show with the mighty Infernal Stronghold that same night! Full tour dates are below.

Salome are hitting the road with Hull & Batillus, but no NYC dates to speak of. The tour will, however, play NYC SANS Salome on 927. Venue is TBA. Tour dates are below.

EVILLIVE:
Since (thankfully!) the calendar is getting stuffed with notable shows, I'll chose my "pick" for the more crowded days. Look for the ones denoted with a star.

NEWS BLAST (BEATS):
- Burnt By The Sun are streaming a new song at their myspace from their upcoming Heart of Darkness due on August 24.
- Morbid Angel's Blessed Are The Sick will see a reissue in October via Earache.
- Valient Thorr highlighted as one of the best shows in NYC.
- Ross Sewage of Impaled/Ghoul fame is currently touring with Ludicra.
- Blut Aus Nord has signed with Debemur Morti Productions.
- Unleashed have signed with Nuclear Blast.
- Assholeparade is streaming three new songs from their upcoming 7".
- Dig on an interview with Cobalt.
_ Check out an interview with I'm Better Than Everyone Records.
- The last 100 copies of Pelican's Ephemeral are available via their webstore.
- Trap Them have signed to Prosthetic Records. Congrats guys!
- Marduk have released the tracklisting for their new LP, Wormwood. Check that out below.
- Trash Talk are currently recording new material. Follow their twitter for more details.
- High On Fire have added a few tour dates on the west coast in early August with Early Man. Dates are below.
- Buzzoven is looking for footage, pics, or stories for an upcoming documentary on the band.
- Dismember's new 2xDVD, Under Bloodred Skies, is out NOW featuring a show recorded at the Party San Festival in Germany as well as a documentary on the band. Check out a trailer for the release here.
- Minsk were recently interviewed by the guys at blistering.com.
- Om recently did a mixtape for Too Cool To Die. Om's Conference Live ships next week via Important Records.