Yes, that is a clock on his head. 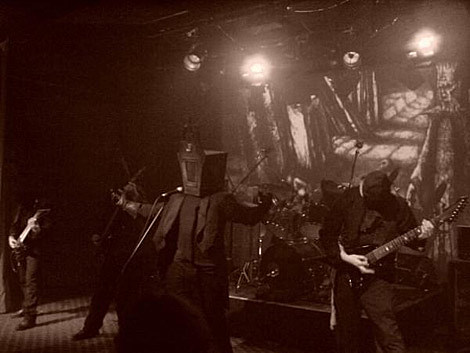 Portal is currently prepping their new album, Swarth, for release via Profound Lore on 10/20. For the unaware, Portal is definitely an odd duck (in the best way possible!), as the Aussies employ discordant chord patterns ala French BM masterminds Deathspell Omega, and a generally discomforting atmosphere abounds. Dig on the extremely promising "Larvae" from Swarth available above! The abstract blackened death metal band from Australia is also one of a few bands that have already been announced for Maryland Deathfest 2010 along with additions like Gorguts, Asphyx, Wolfbrigade, Gridlink, Impaled, and many many noteable others! Full MDF list is below.

Mammoth Grinder has released their new LP, Extinction of Humanity, which is available via Cyclopean Records. The band, which (as we know) shares members with Hatred Surge & Iron Age, combines an old school death metal approach of Entombed / Dismember with the charge of hardcore. Their new LP delivers on the promises made on No Results. Check out a pair of MP3s from Extinction of Humanity available for download above!

As previously discussed, Gnaw Their Tongues are releasing All The Dread Magnificence Of Perversity on 9/8 via Crucial Blast. Check out a song from the LP above, "Rife With Teeth".

In case you somehow missed it, the new Converge track, "Dark Horse" premiered on Stereogum last week. Axe To Fall has been in heavy rotation since I received a copy of this bad boy a few weeks ago, and I think that this could be their best record since Jane Doe. Check out the MP3 above and judge for yourself. 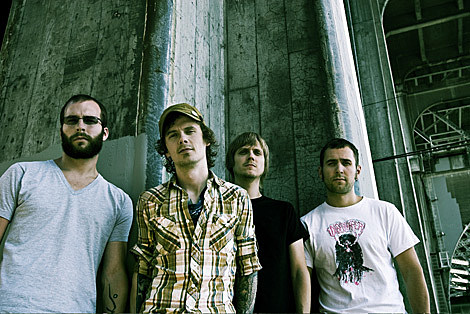 Their show with sunn O))) / Earth / Eagle Twin is little more than three weeks away (tix), and now Pelican has dropped a new MP3 for download from their LP, What We All Come To Need. Dig on "Strung Up From The Sky" above. Helmed by Chris Common (These Arms Are Snakes) in July and featuring appearances from Greg Anderson (sunn O))), Goatsnake, etc), Aaron Turner (Isis), Ben Verellen (Harkonen, Helms Alee), and Alan Epley (Life And Times), the new album is set to blast off at their new home, Southern Lord. Look for Pelican to hit the road with Black Cobra and Disappearer for a fall tour. Black Cobra also recently signed to Southern Lord.

As previously discussed, Kowloon Walled City, is currently prepping their new LP Gambling On The Richter Scale for release 9/29 on The Perpetual Motion Machine. Preorders for the new Kowloon Walled City are up here, but meanwhile, dig on one of the tracks from the LP, "Clockwork", above.

Due to the fact that BV is primarily a live music blog, there will always be a few great bands that deserve a mention yet don't because of their limited/no live dates. I'd like to remedy that, starting with Teitanblood! Seven Chalices dropped earlier this year on The Ajna Offensive and combines black metal and death metal with the filthiest of approaches... you can tell that this band cares less about being exacting and technical and more about being the most blasphemous band in existence. The Left Hand Path recently interviewed Teitanblood.

In that same vein, the (waaaay) out-there black metallers Circle of Ouroborus deserve a mention. Black metal may be the construct, but COO has also been compared to bands like Joy Division and Dead Can Dance as much as to the Norwegian godfathers. COO recently dropped Tree of Knowledge via Hospital Productions and profiled by WFMU who is hosting a pair of MP3s from the band.

Finally, a third band that falls into that category, Heims, an Italian one-man black metal project who released Worship Or Die on Moribund in July. Icy black metal collides with dark ambiance on this punishing and highly reccommended LP. For more on Heims, check out a recent Show No Mercy profile here.

As previously discussed, Merrimack is scheduled to hop on the Marduk / Nachtmystium / Black Anvil / Mantic Ritual extravaganza that will impact Gramercy this December. The French black metal band which contains ex-members of Glorior Belli and Corpus Christii, recently dropped their newest offering to the dark lord on Moribund, Grey Rigorism. Dig on one of those tracks, "In The Halls Of White Death" available for download above.

Phil Anselmo's Housecore Records has released a compilation featuring contributions from Eyehategod, Soilent Green, Haarp, Evil Army, and many others. Pick that up here. The label will also reissue the bulk of the Crowbar back catalog. Down (featuring Phil & Kirk of Crowbar) is scheduled to square off with Melvins, Weedeater, and Evil Army at Nokia on 9/11 (tix). Eyehategod is scheduled to team up with Goatwhore and Pig Destroyer on 10/24 (tix).

Belgian hardcore monsters Rise & Fall are gearing up to release Our Circle Is Vicious on 10/27 via the mighty Deathwish, scheduling a gang of US tour dates in the process. Though none are in NYC, the band has scheduled a show out on LI and in Edison, NJ. Full tour dates are below.

Pittsburgh deathgrinders Circle of Dead Children have completed recording of Psalm of the Grand Destroyer, sending the tracks off to Scott Hull for mastering. The effort, their first release since 2005's Zero Comfort Margin, is due this winter via Willowtip. Speaking of Willowtip, the label has signed Squash Bowels who will release their new LP Grindvirus on October 20.

Ambient droners Transitional are prepping their new album Stomach Of The Sun for release on 9/22 via Conspiracy. Stream the entire thing here. Conspiracy will also release the pic disc edition of the Boris LP Feedbacker.

UK noise-metallers Taint have announced All Bees To The Sea E.P, a new 12" EP that will be paired with a digital download and will include a full live set from Roadburn 2008. The limited edition EP will be available on vinyl only, but will see a CD release in the new year. More details here.

Starkweather has signed with Deathwish! Congrats guys! The band has announced a pair of splits with the label as well as an upcoming LP in the works!

More details are trickling our atbout Roadburn 2010, including this tasty little morsel, Candlemass will perform all of their classic Epicus Doomicus Metallicus with Johan Längquist on vocals in celebration of their 25th Anniversary! The set will also include newer material with vocalist Robert Lowe as part of a two hour set. More details are to come, til then, dig on the flyer below! 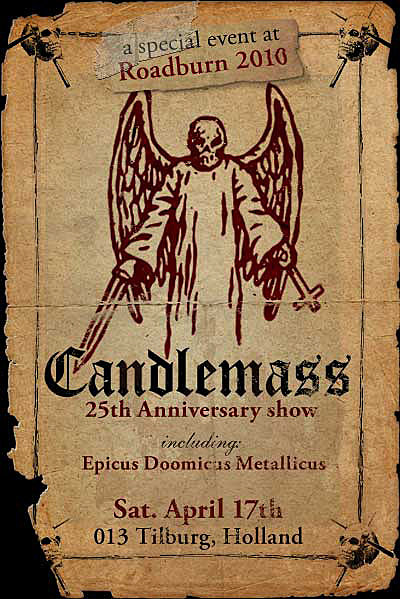 NEWS BLAST (BEATS)
- Stream the esssential new Keelhaul LP here.
- Baroness is streaming TWO new tracks from their upcoming LP The Blue Record.
- The boys in Cough were interviewed by Nodus Gordis.
- The Dillinger Escape Plan record their new album on 9/7. Dig on demos from that record here and here.
- Caina are NOT neo-nazis!
- Sets by Nadja, Grey Daturas, and Gomer Pyle at Roadburn 2009 were posted for download.
- Fenriz names faves Hooded Menace as his band of the week.
- Fu Manchu will release a new LP, Signs Of Infinite Power, via Century Media on 10/19. The Cali band will celebrate their 20th year on this earth in 2010
- Keep of Kalessin is currently working on their follow-up to Kolossus.
- Doomers Hey Collossus will team up with Dethscalator for a split LP on Riot Season due in September. The release is limited to 500 copies and available here.
- Triptykon, the newest project featuring Tom Warrior of ex-Celtic Frost fame, is currently grinding away on the new LP which now has a name: Eparistera Daimones.