New Century Media signees Intronaut will be back in town in August 8th at the Knitting Factory (on sale NOW), this time bringing Behold... The Arctopus and Mouth Of The Architect! Following up last year's excellent yet grab-baggy The Challenger sort-of-EP, the boys will head back into the studio in April to record a new LP. Mouth Of The Architect have a new album on the way as well, Quietly, and you can preview first single "Hate And Heartache" at the Translation Loss MySpace.

Speaking of Colin Marston, the new record for his black metal project with Mick Barr, Krallice, is in the can and is due in July via Profound Lore. Mick Barr's Ocrilim are on board to play a Todd P show opening for the mighty Thrones at Death By Audio on May 22nd. Thrones, aka Joe Preston of Melvins, High On Fire, and many other esteemed projects was spotted playing guitar with the mighty Harvey Milk at SXSW and WFMU has the whole thing available for download.

Made Out Of Babies have posted "Cooker" from their recently announced album The Ruiner, out on The End, and surprise surpise, it is a monster. Check out at their myspace. They have also made their Seldon Hunt designed artwork for The Ruiner available, check it out here (NSFW?). The Ruiner is out June 24th.

Nachtmystium's new LP Assassins:Black Meddle Part I has an official street date now, June 10th, but they have already begun the Worldfall with their new EP available now. Pick up Worldfall on iTunes and at CMDistro where they'll hit you with a discount for Assassins when it drops.

Power-doomers Hammers of Misfortune (mems Ludicra, ex-Gwar) have announced a new double album out via Profound Lore! The band hit the studio in March to record "two distinct albums released as a pair with a central concept and theme tying them in together" for release sometime in the fall of this year. Definitely keep a look out for that one.

The mighty 3 Inches Of Blood tearing through "Trail Of Champions", on tour with new Koch-signees Hatebreed & Type O Negative

Japan's Coffins have scheduled a mini East Coast tour, their first US Tour EVER, with The Endless Blockade, including two NYC shows on May 17th: a matinee at ABC No Rio and an evening show at Rockstar Bar with Unearthly Trance. Coffins are streaming tracks from their new album Buried Death (due June 20th) at their MySpace. The Endless Blockade have a new album of their own, Primitive, out May 20th, but available now through 20 Buck Spin Records.

Wrest's much anticipated new album (possibly the last under the Leviathan moniker due to legal woes) Massive Conspiracy Against All Life, is out now on Moribund. Wrest's long sought-after Lurker Of Chalice S/T full-length has (FINALLY) been reissued by Southern Lord, and is available now.

Portal, Live in Melbourne, AUS. Yes, he is wearing a cuckoo clock as a mask. No, I don't know why. 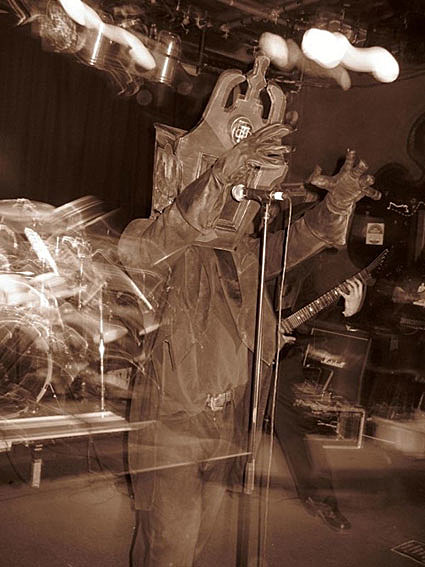 Obituary will form like Voltron with Swede legends Unleashed and Carnifex in a new tour announced since the cancellation of their tour with Origin & Dying Fetus. Unleashed have a their ninth LP, Hammer Battalion, on it's way on June 10th. Check out an interview with vocalist Johnny Hedlund at Metal Hammer. Dying Fetus & Origin have teamed up with local metalcore dudes Sworn Enemy for a tour of their own. Tour dates for both below.

Crusty-metallers Javelina are hitting the road May 7th to promote their badass self-titled LP (out now on Translation Loss), including a show at the Knitting Factory with the mighty Sourvein (ex-BuzzOv-En, mems Hail! Hornet with Dixie Dave of Weedeater). Ticket info is currently unavailable, but when we know, so will you! Sourvein have announced a new EP of their own.

Opeth has released "Lotus Eaters" (download above) from their new LP Watershed out June 3rd on Roadrunner. That makes two new Opeth joints if you include their new video for "Porcelain Heart" (below). Pre-order Watershed here. Me = stoked.

Producer, Pig Destroyer, and Oracle DBA Scott Hull can add one more credit to his already wide-ranging resume: soundtrack composer. Relapse has announced Scott Hull's new album, Requiem (due June 10), as "the first score from [the] veteran sound-designer... influenced by Morricone and Popol Vuh and films such as The Shining, Dead Man, Aguirre and more."

ARSIS - "We Are The Nightmare" (Version Two)

PUNISHMENT DUE:
- Boris - Smile: Boris have ALWAYS been a band with a bad case of ADD, but it was usually confined to a single album. This is Boris's most varied effort yet and possibly the best snapshot of who they are...... a heavy band without limitations.
- Torche - Meanderthal: I think I have made myself clear on this one. Love it. Not only recco'd for all you metallers out there, but also for any fans of Melvins, Nirvana, Kyuss, or even (gulp) Foo Fighters.
- Nachtmystium - Worldfall EP: A great appetizer for Assassins.... 3 new songs and two covers (Death & Goatsnake). Reccommended.
- Death - Symbolic (Reissue): Speaking of Death.... Roadrunner tacked on an additional five bonus tracks to sweeten the deal, but otherwise this is the same ol' Schuldiner classic that you probably should own anyway.
- Origin - Antithesis: A full on double-bass-tremolo-sweep-picking death metal assault. If your idea of heavy is light and shade, head elsewhere. Antithesis is in the red.
- Lurker Of Chalice - S/T (Reissue): Once rare (only 777 released domestically via Southern Lord), Lurker Of Chalice is a dark and dreary mix of experimental, folk, black metal, and ambient that is as frightening and epic as the reputation that precedes it.
- Javelina - self-titled: Crusty blackened metal punk in the vein of BuzzOv-en, this is one seriously pissed off and seriously crushing record.
- Nortt - Gigenfrist: Black funeral doom from the danish recluse, this a collection of dark angst-ridden ambient-y pieces that are as beautiful as they are eerie. Highly reccommended for fans of Nadja, Sunn O))), Ulver, Xasthur, etc. Available domestically at The Omega Order.

NEWS BLAST (BEATS):
- Toxic Holocaust have been added to ALL dates of the At The Gates/Darkest Hour/Municipal Waste shows!
- Grinders Circle Of Dead Children are working on their 6th album, Psalm of the Grand Destroyer, in their hometown of Pittsburgh. Scott Hull (Pig Destroyer, ex-AxCx, Agorophobic Nosebleed) will mix & master the record at his studio (Visceral Sound). Look for it this fall on Willowtip.
- Blackened noise-metallers Wold will release Stratification on Profound Lore on June 24th. Check out "Frost Crystal Symmetry" above.
- Anaal Nathrakh have tacked on a few more dates surrounding their appearance at the Maryland Deathfest. (Dates below)
- Arsis has been added to the Death Angel shows, as Soilent Green has dropped off of a few dates.
- Cable has announced openers Tombs, Wetnurse, and Century for their show at the Ace Of Clubs during their reunion tour. Wetnurse recently signed to Seventh Rule. Century will release Black Ocean next week.
- Wolves In The Throne Room have dropped off of the Boris/Torche tour.
- The Haunted have begun work on their new album with Tue Madsen (responsible for both rEVOLVEr and The Dead Eye) in Denmark. The Bjorler boys are also on tour with their old band At The Gates.
- Tom "Warrior" comments on his departure from Celtic Frost.
- Tech metallers The Number Twelve Looks Like You have announced a new DVD Here At The Ends Of All Things, out June 17th. The DVD is culled from a show in December at The School Of Rock in Hackensack, NJ.
- Lamb of God has signed with Roadrunner.
- Black Market Activities have signed the mighty The Indomitable Iron Sloth (fka The Abominable Iron Sloth while on Goodfellow), who have a new LP built upon the ruins ashes of the previously announced EP.
- Relapse has signed both 16 and Graves Of Valor.
- Metalsucks sat down with Mirai Kawashima of Sigh. Sigh play BB Kings in September.
-The Sword will hit the road this summer with... get this... Down (!) and Metallica (!). All of this, obviously, will be after fulfilling their prior obligations with a certain crew of Florida badasses
- Old school grinders Insect Warfare have called it quits. The previously mentioned Dudefest will be their last show.
- D-beaters Wolfbrigade have announced a new album and plans for a US tour. Details forthcoming.
- Metalkult has posted live footage of Testament from their BB Kings show. Testament is playing the Metal Masters Tour. Also swing by Metalkult for footage from Enslaved's November performance at BB Kings, Saviours show at Luna Lounge last year, as well as Part 3 the Blixa Bargeld interview.
- The Fucking Champs are currently hard at work on VI, while Impaled are working on the followup to last year's sickening The Last Gasp. You can check 'em both out in the studio at EQTV. Impaled also posted an interview at their myspace.
- StonerRock.com sat down for an interview with Jus Osborn of Electric Wizard to discuss Witchcult Today, the latest Moss record Sub Templum (which he produced), and an upcoming EP with Reverend Bizarre.
- NYHC legends Murphy's Law will celebrate their "Skindependence" at the Knitting Factory on July 6th, bringing along John Joseph's Bloodclot as openers. Tickets are on sale. This is a full month before both bands hit the stage with Rancid.
- Teenage Disco Bloodbath have announced a split CD between Tides and Giant, out now. No word on that new Giant record for The End currently in the works.

BLUT AUS NORD - Memoria Vetusta II - Dialogue With The Stars track listing:
01. Disciple's Libration (Lost In The Nine Worlds)
02. Antithesis Of The Flesh (...And Then Arises A New Essence)
03. The Alcove Of Angels (Vipassana)
04. ...The Meditant (Dialogue With The Stars)
05. Acceptance (Aske)
06. Translucent Body Of Air (Sutta Anapanasati)
07. The Formless Sphere (Beyond The Reason)
08. The Cosmic Echoes Of Non-Matter (Immaterial Voices Of The Fathers)
09. Elevation (The Dawn Of The Gods)