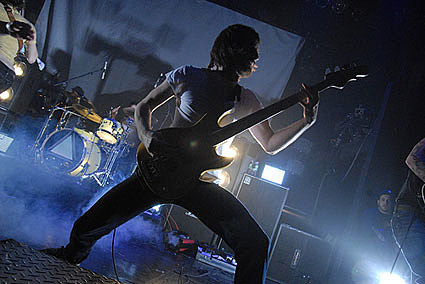 How long until A.O. Scott and Elvis Mitchell start reviewing films with "two devil horns up" or "4 1/2 Pentagrams"? First, the NY Times article on Sunn 0))) & Boris, then more recently articles on Enslaved & Behemoth, and now Dillinger Escape Plan? Great article that, although short, captures some of the fury that is a Dillinger Escape Plan show..... You know your metal band is doing something right (or reeally wrong?) when the New York Times describes your show as a "thickly textured maelstrom".

The guys over at Metalkult.com not only offer a video interview with Chris & Al of Om (which is a little on the gear-y side, but also gets into their style and why they remained a two-piece after Sleep), but also a snippet of the awesome show they put on in November at Europa. The video interview also sheds some light on Shrinebuilder (which will feature Wino is on vocals/guitar, Scott Kelly of Neurosis on guitar).

While you're there, check out the Enslaved video interview they did too! 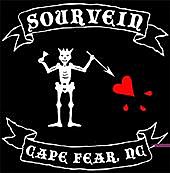 Although Sourvein has lost their bass player (and cousin Dixie Dave Collins, also ex-BuzzOv-en) to the success of his band Weedeater, the doomsters will hit the road again in February with fellow Southern Lords Zoroaster, hitting the Knitting Factory in NYC along the way - Tickets are on sale.

Also, according to Club Midway, look for Weedeater to swing through NYC on March 8th as part of another leg of "God Luck & Good Speed" tour.... If you missed either of their shows at Club Midway in the past year,
make sure to get to this one...

Check Genghis Tron's myspace for another track from "Board Up The House", this one entitled "City On A Hill". Mookie and the boys are on tour.

Doom legends Candlemass return (now with Robert Lowe of Solitude Aetturnus on "Vokills"), bringing their "Epicus Doomicus Metallicus" to the US in May & June of 2008. Daylight Dies will support on all dates….