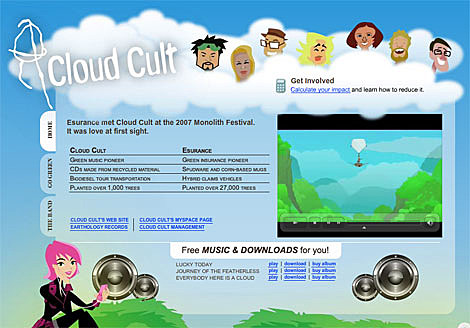 10. CLOUD CULT: "LUCKY TODAY" - ESURANCE.COM
It's a music video! It's an ad! It's a music videad! It's the band Cloud Cult, fully animated in a TV spot for Esurance, but there isn't a sales pitch to be found. The Minneapolis psychedelic-pop band had traditionally shunned marketers, but the DTC insurance company won them over with some hard-fought green credentials. The result is a charming spot that not only fits in with the visual style of the band, but also features one of Cloud Cult's best songs.
[Ad Age Ad Songs of the Year]

This commercial came out late in 2008...though I think I only saw it one or two times. But thanks to an increase in rotation (January is the busiest month for car insurance!) partially influenced by the above placement in Ad Age, Esurance's Cloud Cult cartoon commercial has been on TV heavily over the past few weeks. The band shows up as animated characters in what comes off more as a music video for their 2005 song "Lucky Today", than as a sales pitch for insurance. A quick jump to Esurance's website and you can find a special Cloud Cult microsite where you can watch the commercial, stream/download a few songs, read why the band finds similarities in their and Esurance's love for being green, and learn how to be more eco-friendly.

According to SoundScan, the band sold more individual digital downloads of "Lucky Today" (1,400) in the last week than they usually sell in a month from all albums...combined.

Radiohead gave gratis (aka free) permission to the National Coalition For The Homeless to use the song "MK1" in a spot that attempts to show homelessness can happen to anyone. (via Songs For Soap). This was their first commercial license ever. Watch the spot below.

Michael Stipe was cool with giving a gratis license for Amnesty International to use REM's "Until the Day Is Done" in a powerful new spot. Watch that below as well.

"In fact, it seems like the one thriving corner of the music business is ad placement. The only people making any money are the artists landing their songs in TV commercials and the royalties that come along with that, so the most successful bands this year will be the ones whose songs are most conducive to selling shit. Which means that Santogold is your Artist of the Year for 2009. Once the shampoo companies find out about 'I'm a Lady', forget about it. It's a wrap." [Tom Breihan in the new L Magazine]

Santogold says 'aha' a lot in the new commercial for the Samsung Pixon phone with her song, "Say Aha". Watch it here.

Another car manufacturer went NOT-old school - Volkswagen stayed local (German) with the Berlin electro-group Team on their new (clearly inspired by the movie The Matrix) spot for the Golf. Watch below.

I'm addicted to Diet Pepsi. It's my friend-mesis. Pepsi has rebranded my favorite drink and its overall image with a new "smile" logo. The brand launched its commercial campaign with a spot featuring the music of The Apples In Stereo (Via YANPicasso).

John Lennon may not be alive, but that didn't stop Yoko Ono from lending his voice to a good cause. Watch the OLPC PSA below.

Walmart promotes the football season with a commercial using Queen's anthem "We Will Rock You".

Fashionista Kanye West is teaming up with one of his favorite designers, Luis Vuitton, to create six shoes for the brand. You may have also noticed Kanye's song "Flashing Lights" in the Season 6 promo to the F/X channel's show "Nip/Tuck". Commercial below.

continued, with videos, below...

I'm excited by this: A Tribe Called Quest x Air Jordan Collaboration. The black tee will be in my collection.

National Coalition For The Homeless with Radiohead's "MK1"

Amnesty International with Michael Stipe's "Until The Day Is Done"

A message from John Lennon (OLPC)

and in case you missed this one, it's Ozzy Osbourne ("The Prince of Darkness") for the video game Worlds of Warcraft...