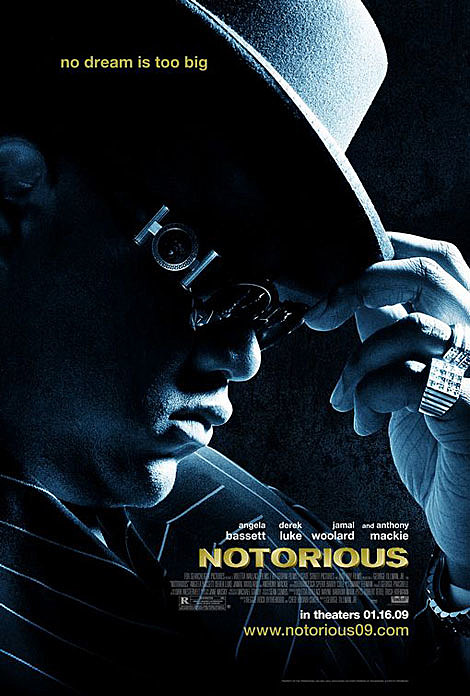 The B.I.G.gest music licensing story last week was the release of Notorious, the film based on the life story of Brooklyn rapper Notorious B.I.G. As you may already know, a virtual unknown was cast to play Biggie. The film hit theaters Friday and so far has received mixed notorious reviews. Notorious contains a number of Biggie's music; the official soundtrack even contains three unreleased songs (listen to them here).

The movie ended up in fourth place on the holiday weekend box office list, grossing an estimated $24 million. According to Variety, Notorious had the best per-location average of the weekend with $14,652 earned (approx) at each of the 1,638 theaters screening the film. I personally didn't see it this weekend because I was too busy helping Paul Blart Mall Cop take top spot on the weekend draw.

Commuters in Liverpool Station were surprised last week with the spontaneous (yet meticulously calculated) filming of a T-mobile commercial. The spot started with music coming over the loudspeaker and igniting a few members of the crowd to begin dancing. As the songs change (there are eight of them), more dancers join in until the entire station is engulfed in the excitement. The spot was created then on air within 48 hours and was shown as an exclusive premier on BBC 4. The songs in the spot, in order, are: Lulu's "Shout", Yazz's "The Only Way Is Up", Pussycat Dolls' "Don't Cha", Viennese Waltz, Kool & the Gang's "Get Down On It", Rainbow's "Since You've Been Gone", Millie Small's "My Boy Lollipop", and Contours' "Do You Love Me". Watch the spot below.

Another spot out of the UK recently is this lyrically driven commercial for the Ford Ka appropriately using Soundtree's "Go Find It".

The Roots really like Cody Chesnutt; so much so they remade one of his songs ("The Seed") for their 2002 album and even had him play and sing on the record. Not sure if The Roots like Axe products, but the band and brand have mutual love for Chesnutt - his jam "Look Good In Leather" is the feature of a new claymation spot for the Lynx line. Check the spot below.

Continuing with the cool Euro commercials trend, Dutch snowboard gear company Protest uses a great Josh Ritter tune, "To The Dogs Or Whoever", in their new campaign. One interesting jump over to Protest's website finds some more interesting licensing: the brand hopes you will enjoy tunes by The Beastie Boys, N.W.A., The Kooks, and MGMT while you get your shop on. Watch the commercial below.

Animal Planet is stepping up its entertainment offerings with a new show called Jockeys. No, it does not have to do with undergarments; it will follow a group of riders and will debut next month on the channel. The promo steps up the cool factor a bit by including Kanye West (and Daft Punk's) "Stronger". Watch the promo below.

Rock Band released this past week a Lenny Kravitz four pack of songs for download. Karaoke-ers can download The Cardigans' "Erase/Rewind" for Microsoft's LIPS.