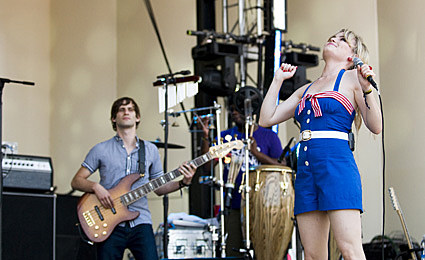 The cola war has been heating up globally in the last couple of months with music as the weapon of choice.

Pepsi's image rebranding campaign, including a new smile-esque logo, launched right after Christmas with a tv commercial featuring The Apples in Stereo song, "Energy". They then went deep during the Super Bowl, dropping a spot featuring Bob Dylan and Will.I.Am singing "Forever Young" as the beverage's new anthem.

Coke counters with a European spot for Diet Coke that features a playful Duffy doing things on her time during an encore break at a concert. In the commercial, she sings a cover of Sammy Davis Jr's "I Gotta Be Me."

When Sara Tate, a senior planner at the London advertising agency Mother, was asked to find a new face for Diet Coke, she knew what she didn't want. "Definitely no rent-a-face," says Tate, whose ad with Duffy will launch on British television, before rolling out across Europe. "We steered clear of yet another glamorous star with a six-figure fee who will promote anything if the price is right. The public is getting smart to that. We wanted someone who is well known, but not hugely famous. Someone who is on the rise, for whom fame is recent enough that they remember what it is like to have a regular life. Duffy was a perfect fit because, although she is extremely successful, she's still incredibly down to earth." [Via Times Online]

Duffy has since cleaned up at the Grammys, at the British version of the Grammys, and - per Paul McCartney's request, recorded a cover of his song "Live And Let Die" for the new War Child Heroes comp that is released in the US this week. You may have heard the Beck/Dylan track from the same album, when it was played during the credits of last night's Oscars (more on the Oscars in a second...).

Coke's second attack is from Justice - Coke enlisted the duo along with Ed Banger Records' So_Me to design a glow-in-the-dark bottle and provide the soundtrack, their massive jam "D.A.N.C.E.", to a commercial. The bottle will be available in clubs throughout Europe. See the bottle in the commercial below.

The third assault from the Coke comes in their Full Throttle NHRA spots; three of the five have licensed songs: The Faces has "Blue Moon" by the Mavericks, The Machine kicks it country with Merle Haggard's "Working Man Blues", and Left Behind features Operator Please's "Zero Zero."

The final wave occurred as I was writing this article. A one-two punch during the Oscars with both The Boy Least Likely To's "Be Gentle With Me" and Sea Ray's "Revelry" showing up in Coke spots during the telecast on ABC (no video available yet). For those not familiar with the band, Sea Ray broke up in 2005. 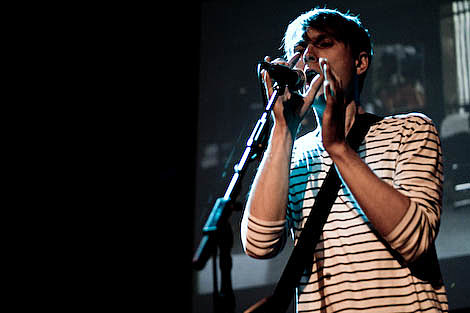 This week, Apple dropped their latest commercial for the 2G Ipod Touch. It is very similar to the previous Touch spot, only this time Franz Ferdinand's "No You Girls" provides the soundtrack. Video below. Additionally, Apple smartly set up a page within the app store listing all of the games featured in the spot. I can personally recommend Touchgrind and Gameloft's Soccer.

Radiohead ok'd another one of their songs to be used in a tv PSA. This time, "Videotape" scores the new commercial for homeless and housing charity, Shelter. Watch the PSA below.

Noah And the Whale's song "5 Year's Time" can add another advertising sync to its belt having been used in the most recent Talk Talk commercial. Watch the spot below.

Born Ruffians' track "Little Garçon" is a good fit for another quirky spot out of the UK for Halifax. Watch it below as well.

East Midlands Trains uses the Reggie Watts song "Out Of Control" in not one but two animated tv commercials. *

Check out this pretty wacky commercial out of Greece for mobile operator Cosmote. It features "I'd Love To Change The World" by Ten Years After.

Damon Albarn and Blur were cool with using "The Universal" in the most recent advert for British Gas. Check out the spot and its nice visuals via Stereogum.

Could you imagine if in an Absolut world the currency was kisses? That's what the vodka maker wants you to see in their most recent commercial; the spot features Louis Armstrong's classic song, "A Kiss To Build A Dream On."

Twix candy bars really should have gone with the original Johnny Nash version of "I Can See Clearly Now" for its new UK spot. It didn't, using a cover version by Hannah Thomas instead. Watch it here.

Ozzy Osbourne has been in a licensing kind of mood recently which continues with a two new Converse collaborations. One is a Jack Purcell model inspired by a straight jacket. Another is a Chuck Taylor hightop with an Ozzy cartoon print in black and white.

A second New Era Suicidal Tendencies fitted hat is in the works (via Hypebeast).

Vans recently announced its spring 2009 Bad Brains line, featuring a couple pairs of shoes and a couple tees. The details including images can be seen here.

Sonic Youth's Kim Gordon has teamed up with Urban Outfitters to exclusively distribute her line of clothes targeted at "cool moms" (details at Pitchfork).

Grand Theft Auto: The Lost And Damned is the first of two downloadable expansion levels made available for xbox360 owners only that comes complete with more than 10 hours of gameplay and additional soundtrack songs. You can read more details on the soundtrack from the game's music supervisor at MTV and watch the trailer with Motley Crue's "Wild Side" as the soundtrack below.

MTV and Snoop Dogg recently announced an ambitious partnership which will see him become the first rapper to get the Rock Band treatment.

On the tube in recent weeks, Family Guy's Stewie made a sweet music video to Bryan Adam's "Everything I Do" (watch it here). 90210 used Shiny Toy Guns and the Veronicas; Gossip Girl had Phantom Planet, Does It Offend You, Yeah? and Will.I.Am. Brothers & Sisters used Radiohead and U2. Sharon Little and The Last Shadow Puppets were used in NUMB3RS; Cold Case featured two songs by Jose Gonzalez, two by Alanis Morissette, a Bravery track, and one from REM. CSI had a Blondie track. CSI Miami rolled indie with two Mogwai tracks and one by Eels. NBC's Friday Night Lights used a Jakob Dylan song. Grey's Anatomy had one by Liam Finn and one from Slow Runner. One of my favs, Heroes, used both a Talking Heads and a My Morning Jacket track. Doves was used in House. Austin band Grupo Fantasma was used during Ugly Betty. Bon Iver and Patrick Watson were featured in Private Practice. HBO's Big Love has been using a lot of varied music with B-52's, Chalets, Patti Smith, Scissor Sisters, Band Of Horses and Santigold all getting airplay. Lastly, Chuck featured quite a number of tracks - songs from Okkervil River, Kaiser Chiefs, Hot Chip, Hives, Talking Heads, Johnny Nash, and Cassettes Won't Listen all made recent episodes.

* Reggie Watts is a client at my day job