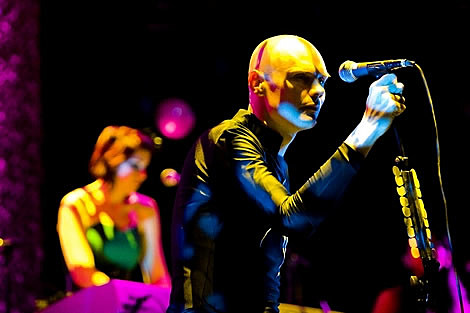 Lately it seems all Billy Corgan wants to do is either get involved in political battles or license his music for entertainment purposes. Case in point, the Billy Corgan avatar is playable in Guitar Hero World Tour, released last October. That was followed by a three-song Smashing Pumpkins GH track pack becoming available for download as DLC in December. Then, on the biggest advertising stage of the year (i.e. the Super Bowl) a new single "FOL" was dropped in a spot for Hyundai. The Super Bowl one-upper came recently when Billy decided to let loose...for the first time...arguably the band's biggest song ("Today") on a Visa commercial. Visa was not done there however, as Billy and the Pumpkins just weren't enough music for the brand to express itself via 30 second spots.

The credit card company dusted off '70s rock band The Moody Blues' classic jam "Tuesday Afternoon" for a spot dubbed "the Aquarium". To finish off, the coolest of the recent Visa spots has creative direction around the Brooklyn-based performance artist known as "Crutch", Bill Shannon. The commercial sees Bill dance through city streets with his patented crutch dance technique to the Don Thomas song "Come On Train". Watch the Smashing Pumpkins one below.

The Magnetic Fields song "Underwear" appropriately provides soundtrack to an artsy, dream sequence-esque commercial for Puma. Watch it below.

Both Vampire Weekend (about 8 seconds of "Campus") and Beck's "E-Pro" were enlisted for this commercial trailer for the new Paul Rudd film "I Love You Man".

Vanilla Ice is very, very sorry he inflicted that song...you know...."Ice Ice Baby"...on the masses. He apologies for the 40 million units sold in a current campaign for Virgin Mobile....Australia. The campaign, Right Music Wrongs, even has a website. Watch the spot below.

Chips. Dips. They go together. They were made for each other! Or so that's what Frito Lay is trying to get across in their two most recent commercials. One features "East End Blues" by artist Leon Jean-Marie, one has Rabbit!'s "Color The World", both have overly fun animated story lines and imagery. Both can be seen below.

Be careful, if you don't have your volume up you might miss The Sea And Cake's "Jacking The Ball" in a recent Citibank commercial (see it via Stereogum).

Earth Hour, the global statement against climate change, was started two years ago by the World Wildlife Federation. It is back again this March 28th with already 1,200 cities across the world committing to turning off their lights for one hour. For more info, check out this promo commercial with Coldplay's "Fix You" in it and/or head over to the event website.

Skating legend Bob Burnquist teams up with filmmaker Ty Evans for a new Hershey's spot featuring "ABC" by The Jackson 5. There's a two part interview with Bob and Ty plus (!) a facebook page for more fun if you are interested.

Ratatat provides the soundtrack to an animated Nike Women's apparel commercial. Watch it below. Nike also synched The View's song "Wasteland" for a UK soccer spot featuring famous footballers including Wayne Rooney, Fernando Torres and Joe Cole. That 30 second commercial can be seen below.

Honda and Mickey Factz, yes Mickey Factz, collaborated on a web series for the Accord. The series features mutiple clips and money-saving tips from MF and DJ Gomez Warren IV. Watch the spot below.

Lou Reed teamed up with Supreme NY for a photo t-shirt as a part of their Spring/Summer 2009 collection.

Who wouldn't want to walk around with sweet green Adidas shoes with "FINE MALT LYRICS" emblazoned on the side? If you are a House Of Pain fan, you'll be doubly excited as they are a collaboration shoe with Adidas. (via Hypebeast)

I'll see you on the darkside of the...shoe? Yes, especially if you wear the Pink Floyd x Converse Chuck All-Star High Top that just dropped. (via Streetthing.com)

And here are the videos...

Aviva Commercial with The Chemical Brothers

Nike Commercial with The View