Miller Chili or mojitos anyone? 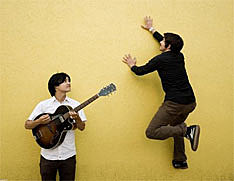 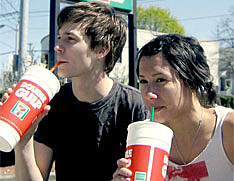 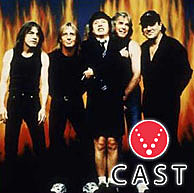 Phone wars 2009 - Verizon vs. AT&T. It is always a battle when these two giants square off with their :60 second spots in tow to prove which company provides the best cellular service and coverage. In recent years, Verizon has enlisted the likes of AC/DC and The Killers. Included in the deal with the Aussie rockers was the right to exclusively offer the band's music digitally. On the other side, AT&T has hammered home their phone offerings and 5-bar messages with a spot including a track from Lupe Fiasco featuring Jill Scott, "Daydreamin", one with Mates Of State, and an Amos Lee commercial, among others. Both have recently gone to the licensing well again to soundtrack new technology and coverage, but with different strategies.

Verizon's new "Hub" decided to go the synergy route, using one of the most popular mainstream tunes of the last year, Jason Mraz's "I'm Yours", in multiple spots showcasing the company's new phone technology.

AT&T meanwhile went with different tunes for each of the new 5-bar spots, matching songs with each commercial's creative direction. In "Backpackers", the sentimental "Falling in Love in a Coffeeshop" by Landon Pigg tells the story of two lovers who met on a brief European backpacking trip. However, because of the quality of the service and technology, they not only can stay in touch with great coverage but end up together again with a touching beachfront reunion. Another boxing themed spot brings to mind Rocky with "Gonna Fly Now." Eighties rockers Journey power this commercial for the symphony. Lastly, an inspirational spot based on Venice, CA, store Tom's Shoes. The store has one premise -- each pair of shoes bought equals one free pair for a child in need. The commercial uses an instrumental version of James Blunt's "Same Mistake." Watch that spot here.

An instant classic commercial from Heineken -- the beer company celebrates responsible drinking (title is called "Let A Stranger Drive You Home") with the help from Biz Markie's "Just A Friend". Watch the spot below.

Beer maker Miller went with San Fran's The Dodos as the music for their new Miller Chill commercial. Watch it below.

"Daylight," a track by Matt & Kim, provides the vibe in a new commercial for Bacardi Mojitos. See it below.

Dell continues their quirky spots + cool music strategy with a new ad for their laptops featuring the Stereo Total song "I Love You, Ono." Watch it here.

Nike has been busy lately linking their online strategy with hip music...starting with a new Nike Women's online spot featuring a track off the new Passion Pit album.

Black Lips reinterpret a classic country song, "Mamas Don't Let Your Babies Grow Up To Be Cowboys," for a motocross spot (see it here). Black Lips' Jared Swilley is one of four curators of music playlists on Nike owned brand Converse's new website. Swilley curates a list for Vice; other labels that have playlists include Ninja Tune, Nacional, and Stones Throw. Nike Skateboarding has a new video, "Debacle"; the trailer has a pretty awesome song by The Replacements. Nike Basketball celebrates the newest MVP, Lebron James, with a puppet commercial and some music by Pink Martini (see it here). Lastly, we already know that Nike and De La Soul like working together...dropping these two dunks in 2005. Now this:

From Nike, the world's leading sports brand, comes an exclusive release by De La Soul, one of the most influential hip hop bands of the last two decades. Commemorating the 20th Anniversary of 3 Feet High and Rising, De La Soul and Nike release ARE YOU IN?: Nike+ Original Run, which is the groups's first-released original material in five-years. The record is only available through iTunes, and is part of a continuing series of releases through the "Nike+ Sport Music" section of the store. (via Hypebeast)

Hip Hop Official has a De La Soul speaking candidly on the relationship with Nike.

We already know that T-Mobile in the UK likes to create mass experiences, integrating crowds and music. They did it again, this time inviting just over thirteen thousand people to join in on a sing-a-long of The Beatles' jam "Hey Jude." Watch the karaoke fun in Trafalgar Square go down here. The brand enlisted Pink to lead the crowd...they also karaoke'd "Piece Of My Heart" and Britney's "Hit Me Baby One More Time".

In 2003, Pernice Brothers put out an album called "Yours, Mine, and Ours." In 2009, a song from said album soundtracks a new commercial for Sherwin-Williams. View the spot below.

Last fall, Lincoln debuted a commercial featuring a Cat Power cover of David Bowie's "Space Oddity." Apparently, the brand loved that tactic so much they created a sequel spot featuring another cover version of a classic song. Shiny Toy Guns were enlisted to create a version of "Major Tom (Coming Home)", Peter Schilling's sequel to "Space Oddity" -- the song was not only used in the spot but was also made available for free download on Lincoln's website. Watch the spot below and head here to download the mp3 (in the MKZ ad).

Car maker Kia created an interesting commercial to launch the brand's new Soul line...and by interesting, I mean weird. The spot sees a bunch of hamsters stuck in their stationary wheels, la-dee-da-ding in their normalcy rut. That is until the "cool" hamsters pull up in their shiny new red Soul, popping their window down and blasting a song by Marz F. Pack & Mumiez, "Do What You Do." If you want to be different, you better run out and get a Kia...at least that is their message. See the hamster fun below.

Continuing with the car/song match ups, Nissan preferred to match up New Young Pony Club and their song "Ice Cream" with the brand's Cube model. Commercial can be seen below.

Honda didn't want to miss out on the musical fun for a new car line, having UK band Mostar Diving Club's "Honey Tree" as the soundtrack for the Insight car commercial. See that spot below. They didn't stop there, adding two more spots to the series -- one with Rabbit and one with Great Lake Swimmers. Explore the brand and songs some more at the Insight website

Scottish producer/songwriter Calvin Harris scores a new commercial for Coke out of the UK. The very creative commercial is definitely worth a view below.

Have you seen that new Schick Quattro For Women commercial...the one that is pretty damn direct about its bush trimming skills? Turns out the song...or partial almost song...features Angela McCluskey. Watch it below.

Two "P's" -- Payless and The Ponys -- come together for a new commercial using the band's song "Lets Kill Ourselves".

Boy, this is something -- Lipton Tea and a crazy commercial featuring the song "World Of Pure Imagination" from Willy Wonka and The Chocolate Factory.

Dutch women have more than one reason to be excited about this commercial for Jillz, a sparkling cider by makers of Heineken. The spot features a rerecorded version of Kool & The Gang's "Fresh." Watch it below.

In video games, Guitar Hero made available for DLC both a three-song Motorhead and three-song Nirvana pack. In related GH news, they announced their next full band game will be a Van Halen game. Rock Band has made available the entire Jane's Addiction Nothing's Shocking album as well as three tracks from Franz Ferdinand, two from The Allman Brothers, and one from Luscious Jackson. Microsoft LIPS has tracks for DLC from The Black Crowes, New Radicals, Coldplay and The Cranberries.

Mike Tyson makes a cameo in the new movie The Hangover (from the same good people that brought you Old School). His scene sees him knockin' out and rockin' out to "In The Air Tonight"; you can see it in the movie's official trailer (near the end) here.

It's no big deal now for Cold Case to feature one artist's music in an entire episode of the series...they have already had seven bands get this honor. Most recently, the hits of John Lennon got the CC soundtrack treatment. Well, Pearl Jam one-ups them all by becoming the first act to have two whole episodes feature their music catalog -- sixteen songs used in total. It has been a big year for PJ as they continue to celebrate the 20th anniversary of their first album Ten. This initiative with CBS marks the first time the band has ever licensed their music for TV. More on this via The LA Times.

As heard on TV over the past couple weeks: 90210 has used Right Said Fred, Yeah Yeah Yeahs, Ida Maria, the Kills, and Cut Copy. Of note on Bones was a use of Antony & The Johnstons; Brothers & Sisters had The Fray, Britney Spears, The Killers, and Brett Dennen. The Virgins and Fatboy Slim were used in Castle; Chuck had a couple Bon Iver songs and ones from The Thermals, Gramercy Arms, The Cure, Franz Ferdinand, and Blind Pilot. CSI had a Sliversun Pickups song, one by The White Stripes, and one by Black Sabbath. CSI Miami used Justice, New Order, and Lily Allen. Dollhouse used Beck, Roy Orbinson, and White Plains. Gossip Girl featured tracks from The Kills and The Ting Tings. Grey's Anatomy used Au Revoire Simone, Ingrid Michaelson, The Rescues, and Mostar Diving Club. House had Hansen, M. Ward, Public Enemy, and "Weird Al" Yanknovic. NUMB3RS used The Shins, Jose Gonzalez, and Eels. One Tree Hill went with Pete Yorn, Kate Voegle, The Cure, and Loverboy. Private Practice used both Elliott Smith and They Might Be Giants. The Clash's "Guns Of Brixton" was used in Rescue Me. Scrubs had The Red Hot Chili Peppers and Peter Gabriel. (Relatively) New NBC show Southland likes both Lady Gaga and Amy Winehouse. The Simpsons rewrote the lyrics of Weezer's "Beverly Hills" and used it twice. Lastly, Ugly Betty used Earlimart and Fatboy Slim.
--

Payless Commercial with The Ponys