This weekly post was really just meant to be an (arguably) interesting news roundup of where (mostly BV-covered) music and musicians are showing up besides in our stereos/computers/headphones/players/etc. Like all news, it might be positive, negative or neither depending on your point of view. Whether or not an artist is "selling out" by licensing their song to a particular product advertisement and/or TV show is always going to be a valid issue/argument/debate, but I removed "It's Not Selling Out Anymore" from the post title because, lighthearted or not, I think it was making this post into something it's not. Most importantly, I didn't want the title to be misconstrued as an official BrooklynVegan position on anything. There will always be (arguably) cringe-worthy examples of licensing (see Of Montreal + Outback Steakhouse) and licensing-related broken (fan's) hearts (see The Moldy Peaches + Atlantis resorts), but a lot of licensing news (as you can see below), is (arguably) pretty neutral. Are there any Modest Mouse fans offended that a Modest Mouse song appears in a snowboarding video game? I doubt it. Does it bother anyone that Stars of the Lid gave a song to the Environmental Defense Fund? Probably only people that are anti-polar bear... That's all I wanted to say.... I won't write intros to these posts after this week (please try to keep the conspiracy theories to a minimum!), so without further ado... it's "This Week in Music Licensing"... 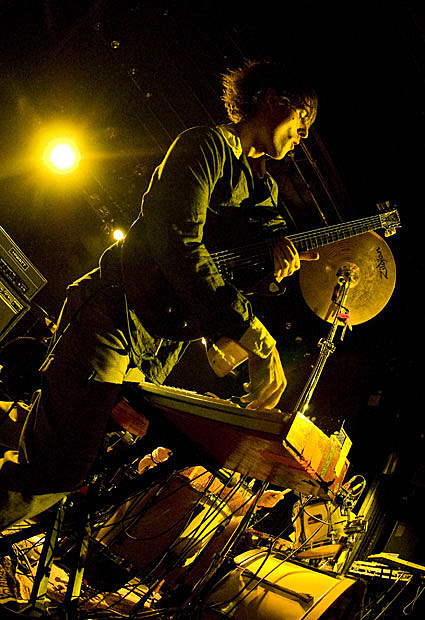 42 Below likes to do things because they can, like make Vodka and wear white suits. The New Zealand spirit maker just launched a campaign and website around the brand's mantra, "Because We Can" - living by your own rules and following your dreams. Pretty deep. The web-based campaign consists of five short films and a user-generated video contest.

Do you have a "because I can attitude"? Do you also like to make your own videos? Do you want to win some money for doing those things ($4200)? If so, you can head to the campaign's website to find out more about the contest.

Tokyo Police Club think it is "really cool and really awesome" that they made a cameo on Sunday night's (11/16) episode of Desperate Housewives. They entered a "battle of the bands" contest, performed "In A Cave", and had two of their song titles ("Shoulders And Arms" and "Cut Cut Paste") featured on the club walls as faux band posters. Even more, two band members have lines in the dialogue. Stereogum has the video. In semi-related news, TPC's Graham Wright just released a solo EP online as a free and/or pay download.

On the tube, Gossip Girl featured three tracks from the new Kings Of Leon album, Only By The Night; One Tree Hill for the second week in a row used a song by Margot & the Nuclear So-So's and also had a song by Earlimart; 90210 went with Kanye West, and Stereolab; CSI Miami used both Jenny Lewis and Bloc Party; NUMB3RS had Cold War Kids; Privileged used CSS; Grey's Anatomy had The Coral Sea. All this week Letterman is featuring cover bands.

Nissan'snew Canadian commercial "Morning Light" goes singer-songwriter with Alexi Murdoch's "Breathe". Nice song but I think they could have found a similar style track with a better lyrical match. Watch the video here.

Stars Of The Lid hit NYC's (le) Poisson Rouge on Friday 11/21; I wonder if they will play the serenely spatial "A Meaningful Moment Through A Meaningless Process", a song used by the Environmental Defense Fund to help fight global warming. The web commercial was released at the end of August. The powerful Polar Bear spot can be seen below.

What do 2008 Mercury Prize winning band Elbow and Electronic Arts have to do with each other? Elbow's song "Grounds For Divorce" is the soundtrack to the commercial announcing EA's new first person shooter, Left 4 Dead; the game hits shelves this upcoming week. Video is below.

Interesting downloadable content (DLC) was made available this week via Xbox Live and Playstation Network for both Guitar Hero World Tour and Rock Band 2: GH got both a Jimi Hendrix and Smashing Pumpkins three song pack and RB2 fans can now play the entire Foo Fighters album The Colour and the Shape.

EDF Commercial with Stars Of The Lid: