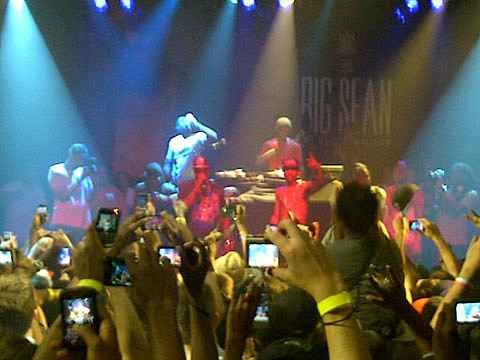 Maybe it was all the excitement of summer finally arriving, but for whatever reason, NYC shows have been pretty heavy on the special guests lately. Here's a few we know about.

Reggie Watts was the secret guest that joined Glenn Kotche and Buke & Gass during 'Wilco weekend' at NYU for the Jab Abumrad's Radiolab Concert on Saturday (6/18). Reggie was a secret because of the two Summerstage shows he's playing this week including the one in Red Hook Park TONIGHT (6/24).

Reptar was a secret guest at the Thee Oh Sees Brooklyn Bowl show on Saturday (Reptar played Governors Ball earlier that day). And as predicted, Thee Oh Sees themselves were the secret headliner at Death by Audio the previous night (6/17).

Ted Leo showed up as a special guest at the Eleanor Friedberger show at Europa during Northside. Bradford Cox was in the Audience. Catch Ted again at the free South Street Seaport kickoff party for the 4Knots Festival that Eleanor plays at the South Street Seaport a week later. It was just announced that Eleanor will also open for Deerhunter at their Webster Hall shows in August. (Deerhunter frontman Bradford Cox must have really liked her set) Tickets for both Deerhunter shows are still available.

As also recently mentioned both Clams Casino and Neon Indian (DJ) were added as last minute surprises guests to the Northside show at Cameo on Sunday (6/19). The show was one day after Neon Indian played Governors Ball. Monday night Cameo hosted semi-secret DJ sets by YACHT, The Miracles Club & Midnight Magic, all who played MHOW on Sunday.

Kanye West showed up at Big Sean's Irving Plaza show on Tuesday (6/21), the same night Big Sean appeared on the Bon Iver episode of Fallon. Despite two of Kanye's friends being on Fallon on the same night however, Kanye did not make an appearance on the show (not even backstage). Videos from Irving Plaza below.

Justin Vernon did not show up at the S. Carey/David Bazan show at Bowery Ballroom on Wednesday (6/22), as we hoped he would. S. Carey is a member of Bon Iver's band and played with Justin the two days previous on both Fallon and Colbert.

Speaking of Fallon, Bob Mould (who DJs his Blowoff party at Highline Ballroom tonight) showed up and surprised people by playing a Sugar song backed by the Roots on the show. Mould recently performed live with the Foo Fighters during their set at Sasquatch. Video of that special guest appearance is below.

Lenny Kravtiz's daughter Zoë Kravitz and her band Elevator Fight played Southpaw with J*Davey on Tuesday (6/21). Lenny showed up to watch his daughter, but he wasn't the only crowd member blowing up Twitter. Drake was also in the audience to catch the show. FADER grabbed him outside the Park Slope venue for a quick video interview which you can watch below. 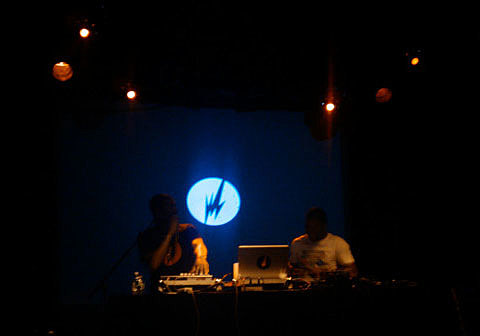 Flying Lotus headlined two Brainfeeder showcases (his label) this week. The first was at Bowery Ballroom on Monday (6/20) and the second at MHOW on Wednesday (6/22). Apparently trippy instrumentals aren't the only thing FlyLo digs when it comes to hip hop producers, because Just Blaze (Jay-Z, T.I.) showed up to play with him at the MHOW show. Flying Lotus also surprised NYC by playing a free late show at Le Poisson Rouge too.

Following in FlyLo's footsteps, Ivan & Alyosha gave NYC a gift in the form of a last-minute free late show at Mercury Lounge.

And while opener Glen Hansard (Swell Season, the Frames) helped Vedder recreate "Sleepless Nights," the tender duet the pair shared on "Ukulele Songs," and the crowd found their voices and their feet for several of he night's tunes -- "Porch," "Unthought Known" -- the biggest roar erupted when Vedder invited Crowded House/Split Enz frontman Neil Finn to the stage for an impromptu collaboration Vedder jokingly called an "unrehearsed collision." With longtime friend Finn on organ, the twosome blended delicate harmonies on Hunters And Collectors' "Throw Your Arms Around Me." Finn took up a guitar and sat down next to Vedder to trade verses on Finn's Split Enz hit "I Got You," which found Finn playfully calling out chords to Vedder during the bridge. "It turns out we play that song differently," Vedder quipped, "But since he wrote it, he's right."

Decked out in a trio of long white lab coats, Finn (organ) and Hansard (guitar) returned with Vedder for the second encore, the rousing "Big Hard Sun" from "Into The Wild." [Billboard]

Neil Finn plays his own show at Bowery Ballroom on 6/26. You can win two tickets on our Facebook.

As you know, Stephen Colbert was the special guest with The Black Belles on his own show last night (6/23). He performed with the band and also recorded a single with them which is now on sale via Third Man Records. Jack White actually also appeared on the show this time for his third and final appearance during StePhest Colbchella '011 and then appeared with Colbert again today (6/24) at The Lot at the High Line. Jack and the Black Belles were also spotted last night (6/23) bowling at Brooklyn Bowl. According to Questlove (who was DJing the venue), he "has bowling game."

Tonight (6/24) is the another Doveman show at LPR. Lisa Hannigan (who played 3 sold out NYC-area shows this week) and Mike Doughty are billed as openers, but according to Doveman, some secret special guests will be showing up as well (as usual).

Last but not least, as hinted, and confirmed earlier today, Fucked Up are the special guest at 285 Kent Saturday (6/26) with JEFF the Brotherhood and Iceage. Tickets are on sale at Record Grouch. Iceage also played a secret show at 538 Johnson while they were in town for Northside.

Any special appearances we left out?