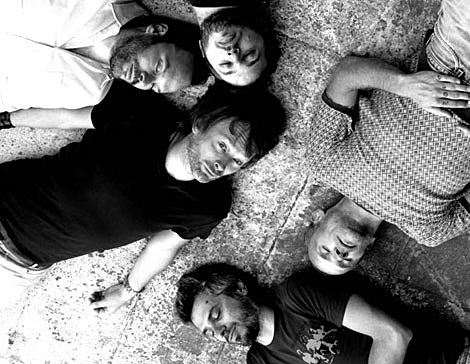 hi
in the past couple of weeks i've been getting a band together for fun to play the eraser stuff live and the new songs etc.. to see if it could work!
here's a photo.. its me, joey waronker, mauro refosco, flea and nigel godrich.

at the beginning of october the 4th and 5th we are going to do a couple of shows at the Orpheum Theatre in Los Angeles.
we don't really have a name and the set will not be very long cuz ..well ...we haven't got that much material yet!
but come and check it out if you are in the area. we've also got locals Lucky Dragons playing.
all the best

Like Phil Selway, Thom Yorke has also been working on solo material. In fact, it was produced by Thom's new band member Nigel Godrich, and the official release date just so happens to be one day after the LA shows. Details below...

Thom Yorke - All For The Best

This is to inform you of the release of two more bits of work shortly.
They are loosely under the Thom Yorke name this time, although these days its all getting kind of blurry. FeelingPulledApartbyHorses is written & played by Jonny and I and is a radical rework of an old tune that's been kicking around without a home since 2001? i think. The Hollow Earth is a bass menace that was born out of the Eraser period but needed a little more time.
Both were produced by Nigel Godrich as ever. And mastered by Bob Ludwig.
They are being put out on 12" with sliced sleeve by Stanley and Tchock.
My sources tell me this will be available from the 21st of September if you're interested...On sale in the w.a.s.t.e part of our website (with a gratis download.) Or you can go buy it in a good record shop if you are lucky enough to have one near you. Then later on there will be like a normal download thing i think around the 6th of Oct through the usual channels.

And so it goes. all the best

The above video is also new. That song is from the 2009 compilation Ciao My Shining Star. You may have seen it when it screened at Music Hall of Williamsburg on September 20th (the show Frank Black also played).