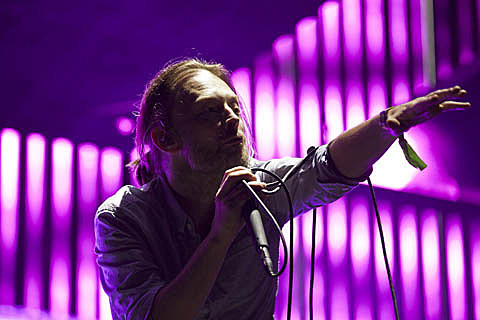 Thom Yorke tweeted that he and Radiohead producer/Atoms for Peace bandmate/Ultraista member Nigel Godrich will be "out and about with two turnables and a microphone" this winter, with dates set in London, Berlin, and NY on March 14. Special guests and venues TBA. The last time Thom and Nigel DJed in NYC, they performed three previously unreleased Atoms for Peace songs with Thom singing live.

Thom recently made a mix for Dazed & Confused Magazine, which included previously unreleased Radiohead, Atoms for Peace, and Thom Yorke material. You can stream that mix and check out the tracklist below. Atoms for Peace's new album, Amok, will be out on February 26 via XL.

Stream, tracklist, and a list of all dates below...

give up the ghost thom yorke rmx radiohead

the grind average joe vs unless atoms for peace